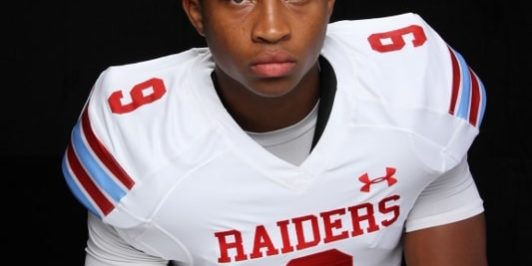 Archbishop Rummel SS/OLB Derrick Munson is one of the most unique and versatile players in the state as he plays strong safety but can also line up in the box and play like a linebacker. He is a linebacker and safety hybrid and that makes Derrick a special player. He goes out and gives 100% on each play and will hit you as hard as he can. As of right now, Derrick is committed to play for the University of Arkansas. Our very own Lee Brecheen thinks that Derrick Munson can continue the Rummel defensive back tradition. “Rummel has had a great group of defensive backs over the years with the likes of Craig Steltz, Dwayne Eugene, and Kristian Fulton. Rummel defensive backs are hitter and Derrick fits that mold. He can run and he can hit. Right now, he is committed to play for Arkansas and I think he can end up being a corner or a safety,” Brecheen said. Get to know more about Derrick as he talks about being committed to the Razorbacks, reflects on his Rummel Raider career, and his expectations this year after falling short of the state championship trophy in today’s recruiting interview!

Derrick shows his playmaking skills as he runs to the ballcarrier and makes the big hit jarring the football loose.

LAFM: What’s your name and position?

LAFM: What were your stats and awards last year?

We set goals as a team. We don’t just say let’s go to state… Our first goal is to always win the district championship and then we go from there.

LAFM: Last year, the team won another district championship but lost in the state championship to Catholic High in a classic game. What was it like going all the way there and losing the championship game and what do you have to do this year to not let that happen again?

It hurts a lot because I wasn’t 100% healthy knowing that what you brought to the table wasn’t there. That night really hurts but I will try my best to stay 100%.

LAFM: Your team plays in a tough New Orleans district. A lot of people say it’s like the SEC West each and every week. What is it like to play the Brother Martins, St. Augustine, Jesuit, etc.?

It’s great competition. I like playing competitive teams back to back.

LAFM: Who is the best player that you have played against last year and why?

Clyde Edwards Helaire (Catholic High BR running back) because he wasn’t the type of  player that I heard about. He didn’t come to my side too much in the state championship game but when it was time for him to come to my side, he came with everything he had and that is a lot of respect.

LAFM: What offers have you received so far?

LAFM: Right now, you are committed to play for the University of Arkansas. What is it about the Arkansas Razorbacks that made you want to commit to them?

LAFM: How has the recruiting process treating you?

It’s good but this year, it’s going to be better.

LAFM: What advice would you give to a player that has to go through the process?

It’s easy to be the one that everybody likes because of the silly things you do but the ones who respect you will be the ones who want you to do better and they will look after you.

LAFM: What was your best game at Rummel and why?

My first game against U-High because I set the tone with 25 tackles.

My speed and the way that I react to the ball are strengths to my game.

I need to work on being more patient.

LAFM: You played for a team that is great at producing players at your position: Craig Steltz (former LSU All American), Kristian Fulton(LSU incoming Freshman),etc. What is it like being mentioned with those guys and putting on the Rummel jersey?

It’s a great feeling knowing that your work and dedication is being paid off with greatness.

LAFM: Coach Roth has been one of the most successful coaches in Louisiana in recent years. What is it like playing under Coach Roth?

Playing under a coach like Coach Roth is very exciting . You will never know what he has under his sleeve for the next accomplishment.

LAFM: What player do you model your game after?

Tyrann Mathieu (former LSU All-American DB and NFL Pro Bowler for the Arizona Cardinals) because he is undersized and he still handles his business.

LAFM: What separates you from every defensive back in the state?