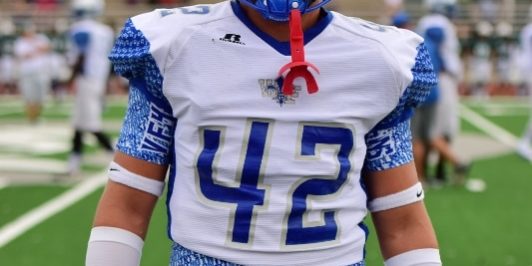 West Feliciana LB Hunter Smith is one of the best linebacking prospects in the state. He is a guy that the coaches love and can lean on to lead a team. Smith is the quarterback and the anchor of a pretty good defense coming back. Hunter Smith is one of those hard-working tough guys that leads by example. Smith has already gotten a lot of offers because he can flat out play the game. There isn’t a huge weakness that Smith shows as a linebacker. He is everything that you want in a middle linebacker. Smith is smart, a great leader, and really athletic. If you had to ask the head coaches that play West Feliciana, they would tell you that Hunter Smith is one of the toughest kids in the Baton Rouge area. He is also everywhere on the football field making plays. Last year, Hunter Smith had over 160 tackles! How many other linebackers can say that? Expect more D-I offers coming Hunter Smith’s way later in the year. Louisiana Football Magazine editor Lee Brecheen expects a lot of in state colleges to offer the West Feliciana middle linebacker in the near future.

“Hunter Smith is a middle linebacker that is 6’1, 225 and can run a 4.6/40,” Brecheen said. “Hunter has gotten a lot bigger from last year. He has one D-I offer as of right now and that is from Army. I think that he will get some offers from some of the in state schools like the University of Louisiana Monroe, University of Louisiana Lafayette, and Tulane because he is a great leader and loves to play the game.”

A lot is expected from the West Feliciana Saints this year especially in a  tough district that also has teams like Parkview Baptist, University Lab, Port Allen, Brusly, etc. The team went 9-5 last year and made the semi finals. The Saints are ready to make that next step and that is make it to the dome especially when you have guys like Hunter Smith leading the way. Read more on the star middle linebacker from West Feliciana as he talks about last year, the upcoming season, his game, his unforgettable football memory, and so much more in today’s recruiting interview!

Hunter Smith has all the physical tools to be a great linebacker but what sets him over the edge is that he wants to be great. (Photo provided by Hunter Smith)

Hunter Smith not only plays on both sides of the football but also plays on special teams which proves that he is an unselfish player and will do everything it takes to help the team. (Photo courtesy of Hunter Smith)

LAFM: What were your stats and accomplishments as a football player last year?

LAFM: Do you have any offers? If so, who are they from? If not, are there any colleges that have shown interests in you?

I look at the atmosphere the school gives off, the academic program, and the coach’s relationship with me.

LAFM: Last year was a good year for the Saints. The team went 9-5 and made the semi-finals but losing in overtime to the eventual state champions the Lutcher Bulldogs 46-38. How tough was it to go that far in the playoffs and lose in overtime like that?

It was very tough. It felt as if it was a loss in the family. We just knew that we had the game with all that we put into the offseason, the entire season, and the game that night. I appreciate the slap in the face by Lutcher that night because it has driven our team to become better, bigger, faster, stronger, and even meaner when we step onto the field. Now everyone that we face has to deal with the anger, vengeance, and unfinished business that we have. We want to kick the door down to the dome this year, and I’ll certainly see that happening.

LAFM: What does the team need to do to have a similar season like last year but have a better ending?

This team needs to remain as a team. Don’t be selfish and just simply play for each other.

LAFM: What are your strengths as a middle linebacker?

I have a very quick read, react quickly, a natural knack for the ball, quick feet, and the ability to understand film to be able to learn the opponent’s tendencies and remember them on the field.

LAFM: What are some areas to your game that you need to work on?

I could always work on footwork and speed which is something I work on a lot in my spare time.

LAFM: Last Thursday, the team played Plaquemine High School in a scrimmage. What does it mean to come back playing football after everything that has happened around the state?

It means football is back! The crisis that happened in the state was very devastating to everybody in Louisiana. To know that many people were out of the house and had lost everything, it just gives us something to play for.

LhAFM: What did you like from the scrimmage that made you excited for the season?

What I liked most about the scrimmage was being able to hit again. I love the sound of the sets of pads cracking with each other! I finally get to use what I built in the offseason

LAFM: What was your favorite game that you have ever played in a West Feliciana uniform? Why?

My favorite game that I’ve ever played in was last season against Iowa because it was such a tight game that came down to the wire and I ended up being the turning point of the game to get the win. Iowa was on the half yardline threatening to score to with 40 seconds left in the game and the score was 14-20. A few seconds before the play started, I looked at my D-tackle Noah Pace, who has been one of my best friends for a long time, straight in the eyes. We both never said a word. It was like we were talking with our eyes. He was telling me let’s do this. If we let them score, we will never play another down together again and through my eyes, I was saying the same thing. We both never said a word. The coach never called a blitz play, but it was a blitz that was calling me. It just happened… With my back against the wall, the ball snapped and I shot through the open hole that Noah cleared for me and I hit the runningback and stood him up exposing the ball for it to easily be taken and our safety Derek took the ball from him. The crowd went crazy! After the game, all the fans were yelling my name and telling me that I saved the game. I cherish that moment as one of the best in my high school career.

LAFM: Who was the best offensive player that you played against last year? Why?

The best offensive player I’ve played against and had to be the luckiest was Cee Jay Powell from Livonia. We hewould be tackling him in the backfield for a would be sack and he’d just throw the ball up and somehow every pass was completed. He could really scramble!

LAFM: What other activities are you involved in when football season is over?

Working my tail off all year round. Being involved in church, family activity, and friends is something that I also do.

Become bigger, faster, and stronger than ever before.

LAFM: If you had to compare yourself to a middle linebacker (college or NFL), who would it be and why?

Kevin Minter (former LSU linebacker now with the Arizona Cardinals). We are both similar in size, speed, and playmaking ability. We both have a similar read.

LAFM: Is there anybody in your family that has played high school, college, or even at the professional level? If so, what is their name, who did they play for, and what position?

LAFM: Who are some people in your life that you want to thank for putting you in the position that you are at today?

Mainly, Jesus Christ. He is the one that I’ve put all my faith into and allowed all the good things to happen to me. My family, coaches, and friends have all done a lot for me too. I appreciate all of them.

LAFM: For college coaches that are reading this, what do you want to tell them?

I want to tell them that I want to play football! I will play whatever position you ask of me, and I will give it my best every second of it! I love the game, and I will do everything in my power to make their program a successful one more than it already is. I’ll be their guy when the going gets tough, and I will be their hardest worker from the moment I sign until the moment I graduate. I’ll be one of the most positive kids you’ll ever coach and most motivational person you’ll ever meet. I want it. Just let me have it. I won’t let them down. I can assure that!