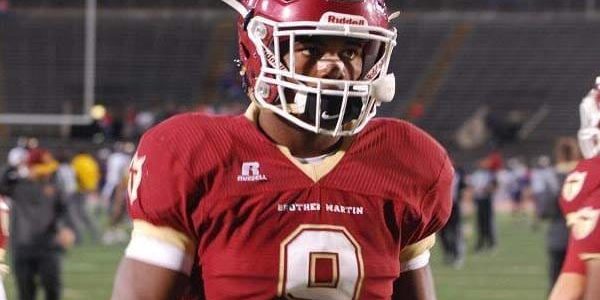 Brother Martin RB/LB Bruce Jordan-Swilling is arguably the best high school football player in the state of Louisiana and one of the best recruits in the entire country. For all the New Orleans Saints football fans, Bruce is the son of future hall of fame linebacker Pat Swilling, who played seven seasons with the New Orleans Saints and had five Pro Bowls in his career. Bruce Jordan-Swilling is looking to build his own legacy and has impressed a lot of high school football fans since he first started for the Crusaders as a sophomore. Swilling has all the physical tools to be a great football player like his father. Last year, Swilling ran for over 2,000 yards and a ridiculous 35 touchdowns in an offense which was record setting at Brother Martin. This year, the team loses a lot of D-I offensive players but return a lot as well with Swilling and Houston Commit Jeremy Singleton. Swilling is not just a running back. He also plays linebacker for the  team a lot of times and could play that position at the next level. Our own recruiting guru Lee Brecheen thinks that he is the best player out of high school since somebody named Leonard Fournette. “Bruce Jordan-Swilling is the best football player in Louisiana along with Tyler Shelvin (Notre Dame).” Brecheen said. “Swilling has Leonard Fournette type ability and can play either RB or LB for his team.  He is faster and stronger than anybody else on the field.” Not only is he compared to Fournette because of his physical abilities but he is humble on and off the field like him as well. Bruce Jordan-Swilling has it all. He has the physical tools, the pedigree, amazing stats, and all the D-1 schools are looking at him. There is one thing that Swilling wants to get done on his checklist and that is bring Brother Martin a state championship. It will take a special player to help carry a team to the dome and luckily, Bruce Jordan-Swilling is that player. Read more about Bruce Jordan-Swilling as he talks about his football family, the two point conversion decision against Catholic High, his opinion on the best player in the state besides himself, and this season’s expectations in today’s recruiting interview!

Bruce Jordan Swilling does his Heisman pose impression in a game last year against Archbishop Shaw. It maybe a sign for years to come.

LAFM: What is your name, age, and position?
Bruce Lee Jordan-Swilling, 18,  RB
LAFM:  What is your height and weight?
6’2 , 215
LAFM: What is your GPA and ACT score?
2.8, 22
LAFM: What is your 40 yard time, bench press, max squat, and vertical?
4.5, 285, 400,  32
LAFM:  What were your stats and accomplishments from last year?
2,198 yards 35 Touchdowns
LAFM: You are one of the most highly recruited football players in the country. Do you have an idea of what your top three schools are going to be? If so, what are they?
No sir, I do not have any top schools.
LAFM: Your brother Tre’ is also on the team. Who is more competitive off the field between you and Tre’?
We both are very competitive. We both hate to lose.
LAFM: In the last couple of years, there were a lot of D-1 players on the team. Did guys like William Clapp (LSU), Irv Martin (Alabama), Peyton Aucoin (Texas), etc. give you advice on how to deal with the recruiting process?
Yes sir, they just told me enjoy it and also go to the school that fits you best.
LAFM: Your dad is a future NFL Hall of Famer in Patrick Swilling. Is there any pressure on you to perform when you have a dad that has been successful at the highest level of football?
Well my dad has his own legacy.  I’m in this game to create my own.
LAFM: What is your dad like when it comes to football? Does he teach you and give you tips or does he let the coaches do their job and just handles his fatherly duties?
He just tells me to go out there and have fun but also play to win.
LAFM: A lot of people, including Lee Brecheen, have compared you to Leonard Fournette. Do you compare yourself to Fournette or is there another player that you like to compare yourself to?
Everyone over the year had compared me to him. I can see the similarities between me and him when it comes to getting north and south.
LAFM: Last year, you had 7 TDS against St. Stanislaus in one half. Tell us more about the game and why you were so dominant in that game.
Well during that game, I just wanted to show my talents and just so happen, I performed and put on that show.
LAFM: Which player in the state do you just enjoy seeing him play and gets you more motivated to play even more?
Tre’ would be the person because he motivates me and pushes me to play harder.
LAFM: Let’s talk about the team. Last year, it was the most dominant offensive team in school history and now you are missing most of the players from last year like Jake Broggi and the tight ends but Jeremy Singleton returns. What does that mean to get Jeremy back?
It means a lot to have a child hood friend with me for our last year of football. Just like Tre’ he pushes me to be better everyday.
LAFM: Last year, Jake Broggi had one of the best seasons for a quarterback and now he is gone. What are your thoughts on his replacement this year John Paul Pierce?
He’s very young with a lot of talent. He just have to put in the work and play.
LAFM: In the last two years, it has been all about the Catholic High (BR) and Brother Martin rivalry. Last year, the team lost on a two point conversion in the playoffs and vice versa for Catholic the previous year. Why did the team decide to go for the win instead of tying it up and going to overtime last year?
Last year, I felt that we could end the game right there and also my team thought we could so it was all or nothing.
LAFM: Being in your third year, what area did you improved the most since starting in your sophomore year?
I’ve become more of a vocal leader.
LAFM: What areas to your game are you still working on?
I’m working on everything there is nothing I’m great at.
LAFM:  In college, what position do you want to play more running back or linebacker?
In college, I will be playing running back.
LAFM: What are the team‘s goals for this year?
STATE/DISTRICT CHAMPIONSHIP!!!!
Categories: New Orleans, Recruiting, Region, Top StoryBy StaffJuly 21, 2016