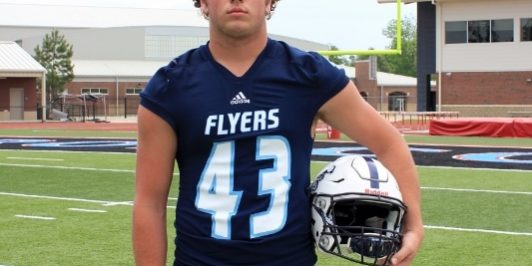 Ethan Stansell from Loyola College Prep does a little bit of everything for the Flyers. For the team, he lines up at running back, tight end, and linebacker. At the next level, Stansell can be a very good fullback. He has great hands and can run for a guy that is  6’2, 230 lbs. What I like about Ethan Stansell is that he gives it all on every play. He runs hard and is very unselfish when it comes to his team. Stansell is willing to play any position that his team wants him to play. Last year, Loyola College Prep made the playoffs even though the team won only four games. Now, this year brings new hope even though the team lost their starting quarterback Bishop George. The team also has a new head coach in Steven Geter but the team also returns do everything player Ethan Stansell. When you have a guy that can line up anywhere on the field like Stansell, the team has an advantage. Louisiana Football Magazine’s Lee Brecheen believes that Stansell is a big time sleeper and that he reminds him of a current LSU football player. “Ethan Stansell really has a ton of ability and could move up to HB/TE or even OLB on defense for the next level,” Brecheen said. “Wherever they need him, he will play to help the team win. Stansell, to me, is a big time sleeper for D-I colleges and I-AA schools. He reminds me of John David Moore (current fullback for LSU) and he is a lot bigger that Moore who walked on the team from Ruston. If LSU wants a clone of Moore, they should get Ethan Stansell.” If Stansell can have a great year for the Flyers, then, he has a chance to attract a lot of schools because he can really play the game of football. Stansell is very strong, athletic, versatile, and will do everything in order to win. That is somebody that I want on my football team. Read more about Ethan Stansell as he talks about the team, the positions that he plays, his comparison with John David Moore, and so much more in today’s recruiting interview!

Here is Ethan Stansell getting a carry as a runningback. He will need to carry the load for the team this year in order to make the playoffs. (Photo courtesy of the Stansell family)

LAFM: Do you have any offers from any colleges? If so, from where? If not, are there any colleges that have shown interest in you as of right now?

LAFM: What is some advice that you would give to your younger teammates about the recruiting process?

If you want to play at the next level get the process started as soon as possible.

LAFM: You play a lot of positions for the team. I’ve seen you at RB, TE, and LB. Which position do you enjoy playing the most and why?

I enjoy tight end a lot but running back is definitely my favorite. I love running the ball, and I like the fact that I still get to run some routes.

LAFM: Which position have coaches told you that you would play in college?

I’ve been told both tight end defensive end or linebacker.

LAFM: Lee Brecheen has compared you to John David Moore who is the starting fullback for LSU. What are your thoughts on that comparison and who do you model your game after?

I think it is and accurate comparison though I believe I can do a lot more than just block. I have never really modeled my game after anyone.

I’m a pretty big guy with a little speed that hits hard and I think that I’m a pretty good leader to my teammates.

LAFM: What are aspects to your game that you need to need to improve on?

My receiving and I don’t hit holes low enough.

LAFM: Last year, the quarterback was Bishop George and now he is gone for this year. What was it like playing with George and how is the QB battle going this year?

I enjoyed playing with Bishop. I think that we worked well together and we’re always for the most part on the same page. It’s going well I don’t think we have a clear idea of who will be the “starter” ,but I think the fight for the starting position is helping improve both of them.

LAFM: Who are some players on offense do you feel can have a breakout year?

LAFM: This year, the team has a new head coach in Steven Jeter but was the offensive coordinator last year. What is he like now since he is the head coach now?

For me, being a primarily offensive player, there has not been too big of a change but you think that he bring a certain intensity that we have not had in the past.

As soon as football season is over lacrosse season starts.

LAFM: If a college coach asked you what separates you from any other football player in the state, what would you tell him?

The fact that I’m a pretty versatile player having started at tight end, full back, slot, and running back.