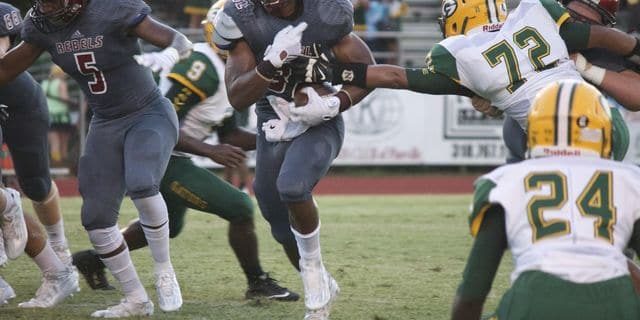 Pineville RB/FB Landon King must be the biggest running back in the state of Louisiana. King is 6’1 at 220 lbs so there is no surprise that he is the bell cow in Pineville’s offense. Landon King can line up at the RB position and run with the football as well as run from the fullback position and block from that position. King also plays LB for the team so he shows that he is versatile and has the ability to play all three positions at the next level. He is not the fastest guy as he runs a 4.8/40 ,but I definitely don’t want to try to bring him down. A running back like Landon King, who is over 220 lbs going full speed down hill is scary for any defensive player especially for smaller defensive backs. He is a runner that is most successful when he runs downhill because it’s hard to stop his momentum when he does that. Even though his 40 time might not be the fastest in Louisiana, he has really good feet for a guy like his size and can move. Last year, King broke out running for 800 yards and 7 touchdowns. Now, King is expected to be a big time contributor for the offense ,of course, but he doesn’t just play on that side of the football. A lot of today’s star players play where they will play in college. Well, Landon King also plays linebacker for the team and he even told me that linebacker might be the number one position that he plays in. Louisiana Football Magazine editor Lee Brecheen believes that Landon King can grow even more and be a productive fullback or linebacker at the next level. “Landon King’s got a great frame,” Brecheen said. “He is faster than he looks and is very powerful when he runs the football. King would make afullback or linebacker in college especially if he keeps on adding weight.” Brecheen also believes that King can still play running back for a lot of smaller schools that offer him. Meet the freight train running back from Pineville in today’s interview as he talks about playing linebacker, his running style, this team’s expectations, and his very successful football family!

Pineville running back Landon King is not just big and powerful but also has some deceptive speed. (Photo provided by Landon King)

Landon King gives it all every time he touches the ball. Here he is against Alexandria High School diving for extra yards. (Photo provided by Landon King)

Week 2 and Week 3: Player of the Game

Progressed to the 2016 Nike+ Football The Opening Regionals

LAFM: Do you have any offers? If so, from where?

Several colleges have shown interest but no official offers yet.

I feel that I can play fullback, running back, or linebacker at the next level.  It just depends on the need of the team at the time.  I am a football player that loves to play football.

I am a power running back.  I am very successful at gaining yards after contact.  I really believe that I am an asset in the backfield with my blocking ability and being able to catch the ball out of the backfield.

I need to improve my speed and lateral agility.

LAFM: Last year, the team went off to a hot start going 3-0 but finished the season 0-7 and not winning a game in the district. What happened in the last couple of games that made you struggle so much?

The team lost morale and the lack of senior leadership contributed to our downfall late in the season.

LAFM: What does the team need to do in order to not let that happen again?

We need stay focused and fight to the end.  Greater emphasis on team leadership and accomplishing team goals instead of individual statistics will aid us in this area.

LAFM: You are the bell cow in this offense. Is there any pressure on you to carry the offense this year and be a main leader for the team this year?

No, there’s no pressure due to the fact that I will be mainly playing linebacker this year.   This will allow me to make plays for my team on both sides of the ball.  I’ve played running back since my freshman year and I believe that I’m ready to face any challenge.

LAFM: You play in a very tough district with a lot of great teams. What team is your favorite to play against and why?

West Monroe is one of my favorite teams to play against because they are such a powerhouse team and I love the challenge of playing against a team considered to be one of the best in the state.  This also allows me to see how I compare to some of the other elite recruits.

LAFM: What college or NFL running back do you model your playing style after and why?

LAFM: Who was the best defensive player that you played against last year and why?

I would suggest John Washington who played for West Monroe and now for Tulane. He was 6’3’’, 300 lbs and could move some furniture.

I’m striving to be the best athlete that I can be while motivating my teammates to be the best that they can be.  I plan to lead my district in the most tackles for a loss.

LAFM: What is your favorite running play and why?

I enjoy a handoff straight down the middle which allows me to dominate anything in my path.

LAFM: Is there anybody in your family that has played high school, college, or even the NFL? If so, who and where did they play?

Several of my uncles have played at the collegiate level.  Thomas King attended ULL and later on played as a DB for the Green Bay Packers and finished his career playing for Barcelona, Spain.  Gary Irving was a DL at McNeese State University.  Garlon Powell had a very successful career as a running back at Louisiana Tech. My uncle, Freddie King III, also played for LA Tech as a WR.

LAFM: Who are some people that you need to thank for putting you in a position that you are at today?

I would thank God and my family for their unconditional support, especially my mom.  I would also thank my teammates and coaches for allowing me to showcase my talents.

LAFM: If a major college coach asked you what makes you stand out as a running back, what would you tell that coach?

I am 6’1’’ and 225 lbs with the heart of a lion and a passion for Christ.  Today, most teams have scat backs that lack my size, which separates me from other running backs.  I am a team leader, motivator, and player.