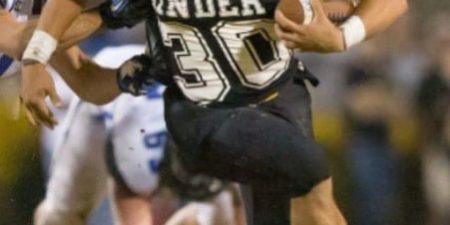 There may be a lot of running backs that are faster, bigger, and more athletic, but there is no tougher running back than Taylor Johnson from Kinder. In reality, Johnson does not act like a superstar or a tough guy. He is just your normal, quiet, regular teenager who just happens to be a star player for one of the best football programs in the state regardless of class. Johnson is a player that does his job and lets his playing do the talking for him which you got to love if you are his coach. Out of all the great running backs in the state, Taylor Johnson has the rest beat in two things and that is his toughness and the number of state championships that he has won. In his fourth year starting for the Yellow Jackets, he has been in three state championships. I will repeat that again for you: THREE state championships even though he has won two of them.  A lot of great players do not get the chance to win any in their high school career, and now Taylor Johnson has the chance to at least go to a state championship every year that he has played football for Kinder. What’s special about Taylor Johnson is that he plays his best football in the biggest games. The Yellow Jackets have to rely on Johnson if they want to be successful. In the triple option offense that the team runs, Johnson runs from the fullback position. Keep in mind that Johnson is 5’9 about 200 pounds but he runs like he is over 230 pounds. Our recruiting guru Lee Brecheen believes that he is really underrated even with  all the great success Johnson has had in the past.

“Taylor Johnson is the toughest running back in the state,” Brecheen said. “He wears out defenses as the game goes on and is so tough and powerful like an army tank. Johnson plays like a D-I player but in the end. I believe that he will be a great fit playing for a I-A school.”

Also, Johnson has the speed to outrun guys in the open field so he has a good balance when it comes to his game. Taylor  Johnson is a major sleeper in this deep running back class. Here is a guy who will help you win a football game and grind it out when you need three yards to move the chains or four yards. He is the guy that you get the ball to in that situation. Kinder has been successful because they have guys that they can trust to win the game like the battering ram at running back Taylor Johnson. Read more about the bruising running back from Kinder High School as he talks about , the state championships, his individual goals, his family, and so much more in today’s recruiting interview!

Taylor Johnson is not just a thumper at fullback. He is also a great athlete as you can see him leaping over defenders. (Photo provided by Sara Johnson)

What separates Taylor Johnson from other running backs is his ability to get better as the game goes on even in huge games like the state championship game against Mangham last year in which the Yellow Jackets won. (Photo provided by Sara Johnson)

I have a lot of interests from other schools but no offers yet.

LAFM: What were your stats and individual accomplishments from last year?

I’ve been to three state championships which is amazing but only won two. Winning a third championship would be a real fun experience to end my senior year.

LAFM: Out of all the big games and state championship games that you played in, which one sticks out the most?

The experience of the last state championship game was unforgettable because overall it was a great game for the whole team and an atmosphere for us and our seniors last year who I was really close to.

I don’t think I’m the toughest running back, but my mindset is that I will try my hardest for the team, especially when my team is working hard to achieve a win for us.

My personal goal for this season would be to make the most out of it and just have a good time playing.

I like to hit the gym and go see my cousin play LSU baseball.

LAFM: Who are some of your teammates that you feel like are going to have breakout years as well?

I think Pooh Williams #5 and Joey McNeely #77 are really going to have a good year.

LAFM: Coach Bret Fuselier came to the program a couple of years ago and ever since won championships. Since you have played under him in the last couple of years, what do you think is the secret behind his success?

I think Coach Bret is a good coach, but we have also had a talented group of boys the last few years. Skip Pickle is also a great offensive coach and adds to Coach Bret’s success.

LAFM: If you had to compare yourself to a college or NFL runningback, who would it be and why?

I don’t really compare myself to any other running back.

I’d do anything to give our team and community the best of what I am capable of to win.

LAFM: If you had to improve on a specific area, what would it be?

My height and speed

LAFM: Is there anybody in your family that has played high school, college, or professionally?

I have a first cousin Hunter Kiel that is about to pitch for LSU and a lot of my family played basketball, but I am the first All-State football player in my family so they are very excited.

LAFM: Is there anybody that you want to give a shout out to for putting you in the position that you are in today?

There is a lot of people that I want to thank for the support especially my family from the Alabama-Coushatta tribe in Texas. They drive three hours to come watch me play every week. I really appreciate it. Also to my family here in LA and the Coushatta tribal council for everything they do. Not to mention my mom’s family in Alabama. They are some of my biggest fans and to my mom Sara and dad Casey for all the years of support. I’m very grateful for all they do for me.

LAFM: What would be your dream school to play for and why?

Even though I play fullback, my dream school would be playing tailback for the University of Alabama because it’s always been my dream since I was little.

LAFM: If you had to promote yourself to a college coach, what would you tell him?

If you give me an opportunity, I’d do my best to contribute to the team and I would work hard at everything that would come my way. There’s not too much to say except actions speak louder than words.