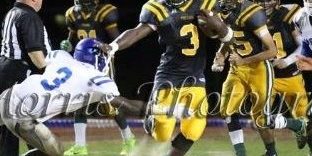 Central Lafourche running back Nelton Allen is one of the best running backs in the Houma region according to Louisiana Football Editor Lee Brecheen. When you watch Nelton Allen run the football, you gotta love the way he runs with it. He is patient hitting the hole, can cut, and it pretty much takes the whole team to take him down. I am surprised that more colleges aren’t going after for Allen. He also plays some of the toughest competition in Class 5-A for Central Lafourche. Nelton Allen is going to be the main offensive weapon that the Trojans go to this year and could be the key reason for the team to make a deeper run in the playoffs because the team did have a good year going 6-5 and making the playoffs but Nelton Allen wants to contend for a state championship his senior season. The offense also has a couple of star receivers on the team so with a balanced offensive attack, the Trojans can be one of the major sleeper teams this year in the state of Louisiana. Louisiana Football Editor Lee Brecheen believes that Nelton Allen is the best running back around in the Houma area as well as the rest of the state. “Nelton Allen goes all out on every run,” Brecheen said. “He is tough to tackle, has great vision in the hole, doesn’t have big time speed but has produced some low radar runs. Nelton Allen definitely runs harder than his build and I truly believe that he is a sleeper for I-AA.” Any coach would love to have Nelton Allen on their team because you know that he is going to give you everything he has on the football field. Read more about the stud running back from Central Lafourche as he tells us his senior season goals for this year, his hobbies, football player that he models his game after, the defensive player he loves to compete against, and so much more in today’s recruiting interview!

Nelton Allen tries to break away as he gets a huge gain for the team last year in a regular season game. (Photo provided by Cindy Morris photography)

LAFM: What are your stats and accomplishments from last season?

LAFM: Do you have any offers from any colleges? If so, who are they from? If not, have you drawn any interests from colleges?

LAFM: Last year, the team went 6-5 and made the playoffs. What is the next step for the team?

The next step for our team is to practice on thanksgiving.

LAFM: Of course, the flood has been really affected the whole state. How has it affected the school and the football team and when is the next practice?

We actually got a lot of the rain that caused the flood so we haven’t really been able to practice outside we’ve been practicing in our gym. The team and I are really thankful that we didn’t get flooded out and still have the opportunity to play . Our next practice is August 22 at 3:00 P.M.

My goals are to rush for more than my previous season which is 20 plus touchdowns and advance in the playoffs.

I feel like that I need to improve on my breakaway speed and lowering pad level.

LAFM: What is your favorite play as a running back and why?

My favorite play that we run is Oregon. The reason is because it’s a run straight up the middle.

I would say Elijah McGuire (former running back for Vandebilt Catholic and currently a star running back for the University of Louisiana Lafayette Ragin’ Cajuns). I don’t really compare myself to him. I just really look up to him.

LAFM: What team on your schedule are you looking forward to play the most and why?

South Lafourche because its our next game.

I want to be an financial analyst.

LAFM: Which player on defense did you feel that was the toughest to play against last year and why?

I would say Amik Robertson (star cornerback and athlete for the Thibodaux Tigers) would be the toughest because he really plays hard every play and he’s always all over the field.

LAFM: Who are some other key players this year that you are expecting to have big years as well?

Players like LB Xavier Triplet, WR’s David Robinson Jr. and Kenneth Poindexter ,SS Norman Taylor, and CB Darius Thomkins are all gonna have a great season i feel they work very hard to get better and they really are looking good a group.

After football, I play basketball to stay in shape in the off season, and this year, I am doing track?

No one has played at any of those levels before.

LAFM: Is there anybody that you would like to thank for putting you in the position that you are in today?

I would really like to thank God first off without him, it wouldn’t be possible . I would also like to think Coach Menard for for all that he has done as a coach, and Coach Jones for teaching me all the little things that are important to be a great running back.

LAFM: What makes you standout as a running back?

I feel like I stand out because I work really hard.