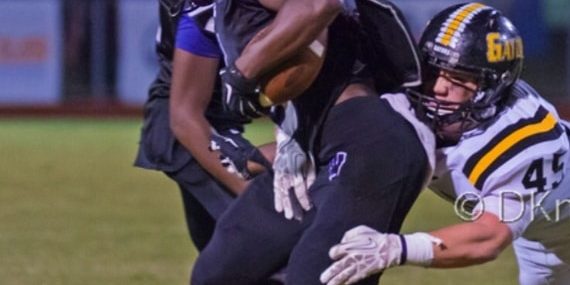 Javin Myers shows his speed in the opening field and his ability to score on any given play. Expect a lot of runs like this one for Javin Myers. (Photo provided by Javin Myers)

Lee Brecheen says that Javin Myers has great vision hitting the hole and you can see that in his eyes in this game. (Photo provided by Prime Star Photography)

LAFM: What are your stats and accomplishments from last year?

LAFM: You have committed to ULM to play football as of right now. What is it about the Warhawks that attracts you?

I just love ULM and the coaching staff as a whole.

LAFM: You started off living at Georgia. How did you end up living here in Baton Rouge at Woodlawn High School?

We both have a lot of similarities and have pretty much the same playing style. The only difference is that we both play for two different schools and that he is a little heavier than me.

LAFM: Last year was the first year in 4-A after so many years in 5-A and the team did well in district finishing 2nd behind Plaquemine. What district do you believe is more competitive and why?

Both districts are very challenging to me because when you see teams like Plaquemine and Dutchtown, it makes the district strong.

LAFM: What does the team need to do to reach the next step and that is win a playoff game and improve on the 6-5 record?

To improve, we just need to not think so much and play the game of football that we know how.

My strengths are my one cut ability and being able to get up field to make people miss. Also, I feel like I can run through tackles. I feel like I am a complete running back.

LAFM: What are aspects of your game that you need to improve on?

I need to improve on being a vocal leader.

LAFM: You are the star offensive player coming back and every defense has their focus on you. Is there somebody that you think will have a huge season for the Panthers?

I think our QB Bryan Bryd will have a huge season for us.

LAFM: What college or NFL player do you model your game after and why?

Todd Gurley (former RB for Georgia Bulldogs, current RB for Los Angeles Rams) because he fought back through his injury and always gives his all.

LAFM: What is your favorite play as a running back?

My favorite play is the counter play.

LAFM: What motivates you to play every Friday night?

LAFM: What is something interesting about yourself that nobody else really knows about?

I love working with music.

To graduate and be an All-American

LAFM: Who are some people in your life that you need to thank for putting you in the position that you are at today?

My dad, my coaches, and my mom

LAFM: What makes you standout from any other running back in the state?

My humbleness makes me stand out most of all.