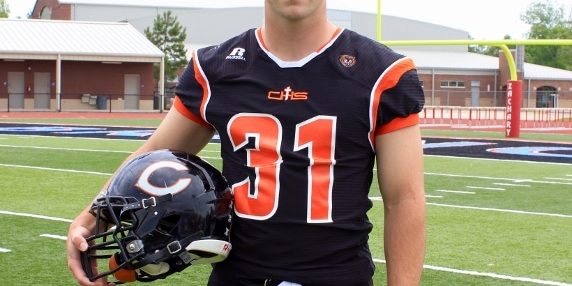 Catholic High School (B.R.) won their first state championship in the history of their school. Star football players like Clyde Edwards-Helaire, Aaron Moffitt, and Ben Miles, who all have a connection to LSU in some kind of way, were all key players in the Bears’ historic run but if there was a playoff MVP for the team last season, it would be RB James Berrigan. People forget that Berrigan was the key offensive player when star running back Clyde Edwards-Helaire went down with an injury in the first playoff game against Brother Martin. He was also the starter in the semifinal playoff game against Evangel Christian and made the biggest play in Catholic High football history with the game winning touchdown in overtime to send the Catholic High Bears to the Superdome. Well, it was the biggest play until the field goal by Parker Fontenot won the state championship the very next game. This year, the Bears have probably the best backfield in the state. They have three guys that can start for any high school in the state. The triple threat in the backfield includes Clyde Edwards-Helaire, who is one of the most electrifying players in the state, Ben Miles, who is arguably the best fullback in the state, and James Berrigan, who can carry a team if the other two get hurt. Louisiana Football Magazine’s Lee Brecheen really likes James Berrigan and what he can bring to the table.

“If it wasn’t for Clyde Edwards-Helaire and Ben Miles, James Berrigan would be more recognizable. He is very athletic and can run outside. James also has deceptive speed and powerful. People forget that he was the key offensive player in the playoffs when Clyde got hurt against Brother Martin,” Brecheen said.”James Berrigan reminds me of a smaller version of Jacob Hester (former RB that played for Evangel Christian, LSU, and in the NFL) by the way he plays the game.

The three headed monster backfield will have to show up this year as the Bears have a very tough schedule but with the talent coming back, it might take the Bears only one year to add another state championship this year. Read today’s article on the playoff hero from a year ago as he talks about winning the first state championship for Catholic High, his comparison with Jacob Hester, his relationship with the other runningbacks on the team, his individual goals, and so much more in today’s recruiting interview!

RB James Berrigan gets the carry in the state championship game last year against Archbishop Rummel where they won in an instant classic. (Photo provided by James Berrigan III)

James Berrigan, 17 years old, I play running back, and I play for Catholic High School

I ran for over 730 yards and 9 touchdowns last year.

LAFM: Do you have any offers from any colleges? If so, who are they from and if not, have you received any interests from colleges?

No offers but there are a few colleges that are interested.

LAFM: Last year, everybody knew Clyde Edwards-Helaire and Ben Miles but you came in against St. Thomas More and Teurlings Catholic and really surprised everybody with your play. What gave you confidence in those games that made you become an impact player right away?

My confidence came from preparing hard during those weeks and making sure I knew every assignment I had. I knew that if I just did my assignments and played hard then the rest would take care of itself. My teammates also gave me a lot of encouragement.

LAFM: Not a lot of people realized that you were the key offensive player in the amazing playoff run the team had last year when Clyde Edwards-Helaire went down with injury. What does it mean for you to be a key offensive player for Catholic High’s first championship team a year ago?

It was always a dream of mine to come to Catholic and win a football state championship, but now that it is a reality it is still pretty hard to believe. It was great to be a part of and it was great to do it for Coach Weiner and the Catholic High community. It is something I will never forget.

LAFM: If there was one word to describe the playoff experience you had a year ago, what would it be and why?

Memorable because I will remember it for the rest of my life.

LAFM: Obviously, the play that sticks out to your mind was the game winning touchdown against Evangel Christian in the semi-finals. What does that mean for you to make a play that will stand out in Catholic High History for years to come?

I will definitely remember that play for the rest of my life. There was no better feeling then when I crossed that goal line and to do it for Catholic High made it even more special.

LAFM: There are a lot of D-I prospects on the team especially in the backfield with Clyde Edwards-Helaire and Ben Miles. Do you feel underappreciated and underrated with the other running backs?

No. We all play a special role in the offense and playing with them has made me a better player.

LAFM: Has the offseason been different for the team now since the team won a state championship?

Nothing has changed. The state championship was last year and now we are focused on this year and we worked just as hard in the offseason as we would if we didn’t win state last year.

LAFM: The team plays Parkview , Zachary, and St. Thomas More, which are all state championship caliber teams. What team are you looking forward to playing the most and why?

Parkview because they’re our biggest rival.

LAFM: What does the team need to do in order to win back to back state championships?

We just have to take each week seriously and focus on the game that is in front of us and then we will worry about the state championship when we get there.

Rush for over 800 yards this season and lead the team to another state championship.

Making better reads off of the o-line.

LAFM: If you had to compare yourself to a college or NFL running back, who would it be and why?

Jacob Hester (former fullback for LSU and former NFL fullback) because I try to run the way he ran.

My dad and my brothers have played high school football

LAFM: Is there anybody that you need to thank for putting you in the position that you are in today?

My parents and coaches.

LAFM: If there is a college coach reading this article, how would you promote yourself to him?

I would say that I run the ball hard and give effort on every play.