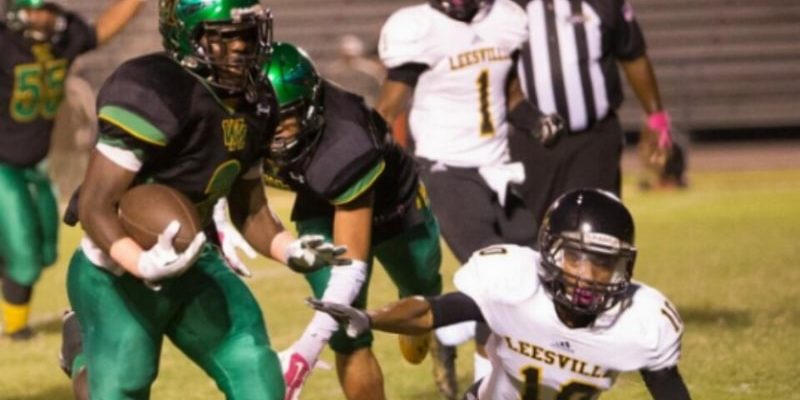 RB Jacobi Taylor is one of the most exciting players to watch in the state. He is a threat to score each time he has the ball. He  can run inside, outside, and can return kickoffs and punt returns. Jacobi is also very tough to tackle in open space. Read more about Jacobi in today’s recruiting interview.

Jacobi Taylor breaks a tackle as he tries to burst his way into the endzone.

Jacobi Taylor running back class of 17

LAFM: What is your 40 yard dash time?

LAFM: Who is the best player you have ever faced while at Washington Marion?

Rawlin Guillory ,one of our linebacker, used to bring that pop to me. He just made me a better person and player.

LAFM: What is the toughest team in your district?

LAFM: What is your favorite play as a running back and why do you like the play so much?

I really like toss plays because I could get to the outside faster than my opponent.

LAFM: Who do you model your game after?

LAFM: Why do you model Tavon Austin as the guy that resembles your  play?

I model Tavon Austin because he’s quick, explosive and he also knows how to beat his opponent. He is also a humble person.

LAFM: What colleges have offered you to play in the next level?

I having been offered yet.

LAFM: What separates you from other running backs in the state?

I’m a hard working player and I set a goal to reach in order to be a successful athlete.

LAFM: What is your favorite football memory while at Washington Marion High School?

In my sophomore year, we were playing Sam Houston on TV. I was nervous and we lost that game. That’s when I scored my first touchdown and I remembered that one of the referees told me son you are a strong kid because we were losing bad but I just didn’t let that bring me down.

LAFM: What are your pre-game rituals?

Headphones in while visualizing the game.

LAFM: What are your hobbies when you are not playing football?

LAFM: What motivates you every Friday night when you play football?

My grandparents because I didn’t really know my real parents so my heart in everything I do I think of them.