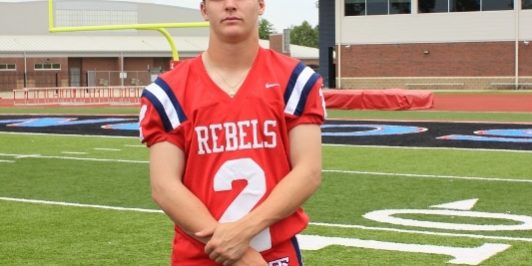 Most people know Hayden Cantrelle as one of the top baseball prospects in the state. As of right now, he is committed to play for the University of Louisiana Lafayette, but if he wanted to, he can be a D-I football player as well. Cantrelle has great speed. He can run a 4.5/40 and is quick and elusive. Cantrelle was a great wide receiver for the Rebels and also the number one target for QB Cole Kelley, who is now with the Arkansas Razorbacks, last year. Now, Hayden Cantrelle has a new task. He is now the starting QB for Teurlings Catholic. Not only does he have to switch positions to quarterback but he also has to replace the shoes of one of the best quarterbacks in Teurlings Catholic history in Cole Kelley. Hayden Cantrelle may not have the arm and the size that Kelley had but he has the athletic ability to make plays and extend them. The good news is that Hayden Cantrelle has had some snaps as a wildcat quarterback and his experience as a number one wide receiver will help with the communication he has with the other wide receivers. Louisiana Football Magazine owner Lee Brecheen believes that Hayden Cantrelle is the best athlete to come out of Teurlings Catholic. “Hayden Cantrelle is the best athlete at Teurlings Catholic,” Brecheen said. “He is one of the best baseball players in the state and is a great football player as well. Cantrelle has great speed and if he didn’t have a baseball scholarship, there’s a great chance that he could have one at football. If Cantrelle wants to play football at the next level, he could make a great defensive back or return specialist.” Everybody knows what he can do on the baseball diamond. Now, expect Hayden Cantrelle to perform at a high level this year for the football team. In today’s recruiting interview, two sport star Hayden Cantrelle talks about his commitment to play baseball, balancing the two sports, replacing Cole Kelley, the reason that he wants to play football instead of saving his body for baseball, and so much more!

Hayden Cantrelle mostly lined up at wide receiver last year but this year, he will be taking snaps at quarterback. (Photo courtesy of the Cantrelle family)

Hayden Cantrelle ,in action during a baseball game for Teurlings Catholic, has committed to play baseball for the Ragin Cajuns but that doesn’t mean he has ruled out football for the next level yet. (Photo courtesy of the Cantrelle family)

LAFM: What is your 40 yard time, max bench press, and vertical?

LAFM: Last year, you played wide receiver and this year, you are the starting quarterback. What did the coaches see in you that made them put you at quarterback?

I came to Teurlings Catholic as a quarterback originally so I was moved to wide receiver while Cole Kelley was our quarterback, so this year happened to be my year.

LAFM: You are also one of the most highly recruited baseball players in the state. What made you want to play football when other big baseball recruits just play baseball?

I always loved football, on the same levels at baseball actually and the fact that I have committed to play baseball at the University of Louisiana Lafayette does not change my opinion about football.

LAFM: Last year, Cole Kelley was the star quarterback and now he is at Arkansas. Is there any pressure on you to fill his shoes this year?

No doubt. They are big shoes to fill for sure and Cole had a great career at Teurlings Catholic, but I’m not pressured to fill his role but actually had an expectation from my teammates, coaches, and myself as well.

LAFM: Did he give you any quarterback advice to help you this season?

He told me to carry out my leadership role as the quarterback this year and to have fun with it and enjoy it.

LAFM: Does the experience of playing wide receiver help you in reading coverages and communicating with the other wide receivers as a quarterback?

LAFM: You committed to ULL to play baseball. Do you consider playing football at the next level or are you sticking with baseball after this year?

I do still think about playing college football. As of right now, it’s not likely,but who knows, anything is possible.

LAFM: Your dad Kevin Cantrelle was actually the play by play announcer for ULL. What was it like hearing your dad call those games?

It’s pretty cool. He used to commentating for television for 15 years but not anymore.

I just want to be the best team leader that I can be for my guys and help us to reach our potential by the end of the season.

LAFM: What are the team’s goals this season after last season going 10-4 and reaching the semi-finals?

The team never lost sight of what we had ever since we played in the semifinals last year. We still have that hunger to be back where we were last year except we want to make it to the dome and win there.

LAFM: In speaking of wide receivers, you were Cole Kelley’s favorite target last year. Do you have a go to guy as of right now at wide receiver?

On our wide receiving core, we have numerous guys who I trust to throw to when the game is on the line. I’m well sure of guys like Luke Vidrine, Holland Griffin, Connor Talbot, and Jansen Lormand. Just to name a few. Those guys are all there for me and all in fact are my go-to’s.

I bought a ukulele about a year ago and have learned some things and am still learning how to play.

LAFM: Which team are you looking forward to playing the most this year and why?

St. Thomas More. It will be the last time I get to play the crosstown rival school in football, and it’s always the best atmospheric game we play every year.

LAFM: What was your best game in a Teurlings Catholic uniform?

LAFM: Do you have any pregame rituals? If so, what are they?

I always like to dance to some of the pregame music that they play. I like to catch pregame warm up throws and punts with one hand and then, I always get a prayer with some of the guys in the corner of the end zone before we get ready to play.

My dad played high school football in New Orleans at Holy Cross as a wide receiver.

LAFM: Who are some people in your family that you like to thank for putting you in the position that you are in today?

I would like to thank my dad for always putting me in positions to be successful. I would also like to thank the numerous family members who consistently support me in my athletic endeavors and hobbies outside of athletics as well.