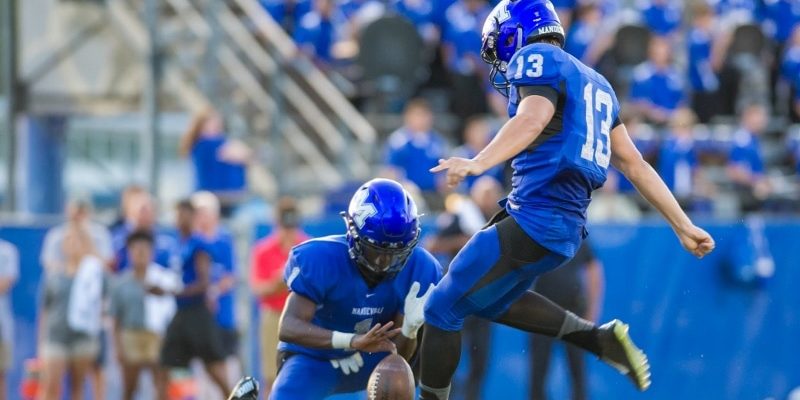 Mandeville Kicker Joseph Bulovas may be one of the best kickers in the country due to his range and accuracy as a kicker and punter but teams also get a bonus with Joseph Bulovas because he is a great athlete as well. Get to know more about Joseph Bulovas in today’s recruiting interview.

LAFM: What have you been doing during the offseason?

Playing baseball, kicking, and working out. Along with playing quarterback.

LAFM: Are there any kicking camps or any other football camps that you have gone too?

Yes, I have been to many kicking camps and kicked in front of many colleges.

LAFM: Which kicker do you model your game after and why?

LAFM: What offers did you receive so far?

LAFM: Why do you think that you are the best kicker in the state?

LAFM: How long have you played football? Do you play any other sports that help you with kicking?

I have played football since I was 13 and baseball certainly helps me gain a competitive mindset and keeps me competing year round which helps my kicking and punting.

LAFM: What is the longest kick you have ever made in practice or in a game?

My longest in a game is 52 yards, but my longest field goal is 75 in practice. My longest kickoff in a game was 80 yards.

My strengths are kickoffs and field goals while also being a great punter.

LAFM: What are some aspects of your game that you need to work on?

Being more vocal as a leader because I have always led by example, but now as a senior in high school I have to step up and be more vocal.

LAFM: When did you realize that you could do this and be pretty good at it?

I started kicking when I was seven years old and after a little practice, I knew I could be pretty good.

LAFM: What are your goals as a team this year compared to last year’s?

They are the same every year to a certain extent, but one that many teams overlook is becoming a family and so that is very important to us and our success.

LAFM: What is your favorite football memory?

My favorite football memory is when I led the game winning drive as the sophomore Quarterback to beat our rivals St. Paul’s, but it is very close to when I hit a 52 yard filled goal vs. Covington to end the first half as a sophomore.

LAFM: Is there anybody you need to thank for putting you in this position today?

My parents always saw how good I could be even from the very beginning and what they’ve done for me cannot be justified with a simple thank you because they never stopped believing in me.

LAFM: Is there anybody in your family that has played high school, college, or even pro ball?

My dad played both baseball and basketball in high school and my mom played tennis and was a gymnast in high school as well. However, neither one participated in college or beyond. The only person in my family that has is my Uncle, John Bulovas, as he played for the 12th man team at Texas A&M in 88-89.
LAFM: What advice would you give to somebody who is trying to deal with the recruiting process?
My advice would be to trust the process. It takes time, but send film and go to as many college camps as you can because this opportunity only comes around once in a lifetime.
Categories: New Orleans, North Shore-Tangi, Recruiting, Region, Top StoryBy StaffJune 3, 2016