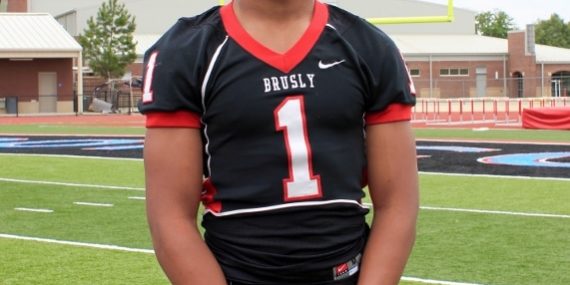 Jason Holliday is one of the best pure athletes in the Baton Rouge area. Here is a kid that is 6-4 over 2o0 pounds and can run a 4.5/40. He also has a good arm as well. Whether or not college coaches recruit Holliday as a quarterback, we will have to wait and see, but you know that Jason Holliday is going to make some big plays for you with his physical ability. A lot of teams will have a tough time bringing him down with his big frame and also running him down because he has great speed but he will also beat you through the air. In the first game for Brusly against White Castle, he clearly jumped over a defender and then dived into the endzone. This gives you an idea of what kind of talent he has. Sometimes teams have fits containing him because they don’t have a quarterback on their roster that has the same skill set as him. The only player in the state that is really like him in regards. to his skill set, is another great athlete in Keytaon Thompson from Landry Walker. Besides Thompson, there is really no other quarterback in the state that matches what he does. When Brecheen saw Holliday play, a college player jumped up to mind but it was not a quarterback.

Jason Holliday is like Keytaon Thompson but a little thicker. LSU will definitely monitor him because he is 6-4 at over 200 pounds and can run a 4.5/40,” Brecheen said. “Holliday can play linebacker or wide receiver like Jazz Ferguson from West Feliciana who plays wide receiver for LSU.”

The reason that we call a guy like Holliday an athlete is that he can probably play any position on the field. Like Brecheen said, he can grow and play wide receiver or linebacker. Holliday’s team Brusly High School is off to a great start this year as the team is currently 2-0 even though they played smaller teams like White Castle and St. John (Plaquemine). The schedule is going to get tougher for the Panthers as they play high quality teams like Parkview Baptist, West Feliciana, University Lab, and do not forget the Westside rivalry with Port Allen which also has a great athlete as quarterback in Jarious Robertson. In the next couple of games, Holliday will show how big of a star he is in the next couple of weeks. We caught up with the star Brusly quarterback and talked to him about the season, last season, colleges, his favorite player, and so much more in today’s recruiting interview!

Jason Holliday’s biggest weapon is his legs and he uses them here in the jamboree against the 4-A power Plaquemine Green Devils. (Photo provided by Jason Holliday)

LAFM: Do you have any offers from any colleges? If not, have you been looked at by colleges?

I have two offers from Jackson State and Arkansas Pine-Bluff.

LAFM: What position do you think you will play in college and why?

I think I will play quarterback in college because I have all the tools to be a quarterback at the next level.

My strengths as a quarterback are being able use my legs and arm strength.

I need to improve on standing in the pocket and making throws.

Cam Newton (Heisman winning QB at Auburn and defending NFL MVP for the Carolina Panthers) because he is my favorite player and he can make plays with his feet and also can throw the ball well.

I tend to get nervous before games.

LAFM: The team is 2-0 to start the season. What are things that you like about the team?

The things I like about the team this year is the mindset we play with and that we play for each other.

LAFM: The season gets tougher later in the year with teams like Parkview Baptist, U-High, West Feliciana, and even the Westside rivalry with Port Allen. What team on the schedule are you looking forward to playing the most and why?

I look forward to playing all of them because we have a really good football team and want to prove that we can play with the top teams.

LAFM: Is there a game that sticks out to you while playing for Brusly and why?

Last year game against Port Allen and because it was the Cox 4 game of the week and I scored the game winning touchdown.

My individual goals this season is to be an All-State Quarterback.

LAFM: What is your favorite football play as a quarterback?

LAFM: Do you want to give a shoutout to some of your teammates?

I want to give a shout out to my offensive line and the rest of the Brusly football team.

LAFM: Is there anybody that you would like to thank for putting you in position today?

LAFM: What would you tell the college coaches reading this?

I’m a competitor and I just need chance to showcase what I can do.