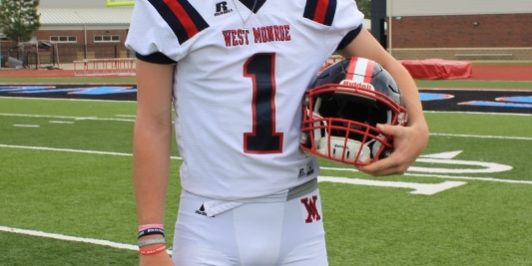 There are a lot of great quarterbacks in the state (Lowell Narcisse, Aldon Clark, Miles Lapeyre, etc.), but maybe not as physically ready as Robert Scott Foust who is 6’3 and over 200 pounds. He is everything that you want in a quarterback. Foust is big, tough, has good feet,  has a cannon arm, and more importantly, he wins football games. As a starter at West Monroe High School, he is an impressive 24-3 as a starter. Even though Foust has not won a state championship at a historically rich football program like West Monroe, he will go down as one of the best quarterbacks to ever put on a Rebel uniform which is saying a lot. Lee Brecheen, owner of LA Football Magazine thinks that Foust will have the biggest breakout year of any quarterback in the state. “Robert Scott Foust has the ability to be one of the best passers to ever come out of the school,” Brecheen said. “He also has decent feet in the pocket and can run when he is rushed out of the pocket. Foust has not hit his full upside yet, and 2016 would be the perfect season for that to happen, which is a good thing because he is very talented.” After a disappointing early postseason loss to Ponchatoula last year after dominating the regular season, Foust and the West Monroe Rebels are looking forward to avenge their postseason loss last season and going even farther this year. Read more about Robert Scott Foust as he talks about an interesting year last year, offensive players returning, and what he wants to accomplish this year as well as his team in today’s recruiting interview!

Robert Scott Foust showing what he can do as a quarterback and that is extending the play. He will need to do more of that if he wants to achieve his goals for this year.

LAFM: What is your 40 yard time, bench press, squat max, and vertical?

LAFM: Did you attend any football camps over the summer? If so, what are they?

LAFM: Do you have any football offers from any colleges right now? If so, what are they?

LAFM: Last year, the team had a really good regular season going undefeated and being ranked number one in the state. The team was blowing teams out and was a favorite to win the state championship. What happened in the game against Ponchatoula. Did the team overlook Ponchatoula or was the team just outplayed?

We had a great team last year but could’ve had better team chemistry. We came into the game decently prepared and dug ourselves into a hole early.

LAFM: What does the team need to do in order to have a better postseason?

In my opinion, we need to prepare every postseason game like it is the state championship game.

My goals are to put my team in the right position to win a state championship.

The team’s goals are to build great team chemistry with players and coaches and to take WM back to New Orleans.

LAFM: You are one of the most physically gifted quarterbacks in the state. What is your biggest strength at the position?

My strength is being able to make any throw there whenever I need to make it.

LAFM: What is your biggest weakness at the position?

My biggest weakness is my ability use my feet to extend plays and that’s what I have been focusing on for the last 5 months.

LAFM: Does it make your job easier when you have guys like Trey Coleman and Slade Bolden in the backfield to give the ball off to? In your opinion, who is faster?

LAFM: Which college or NFL quarterback do you compare yourself to the most?

I compare myself to Tom Brady (New England Patriots MVP QB). I try to prepare and come at the game as he does.

LAFM: What was your best game that you have ever played in?

The Pineville game my junior year was my best game. I had 5 touchdowns in one half.

LAFM: Who was the best player that you have played against?

LAFM: Which team on your schedule are you looking forward to play the most?

I’m not one to look ahead, but the John Curtis game is really standing out.

LAFM: Is there anybody in your family that has played high school, college, or NFL?

LAFM: If somebody asks you, what makes you the best QB in the state, what would you tell him?

I would say that I know how to win. I am 24-3 since I have been starting at West Monroe, and I can make any play on my feet or with my arm with any QB in the state.