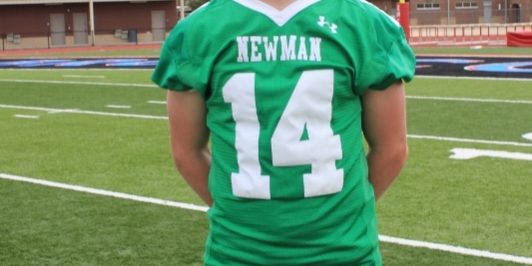 There is a quarterback tradition at Isidore Newman High School. Think of some of the best quarterbacks in the NFL. You think of Peyton Manning and Eli Manning. Both those quarterbacks went to Isidore Newman High School. This year, there is another quarterback that can add his name to QBU and that is Miles Lapeyre. Lapeyre made headlines as a sophomore when he led the team to the semi-finals for the first time since Peyton Manning played quarterback as a sophomore. Sound familiar? Last year, Lapeyre had one of the best single seasons ever at Isidore Newman High School and now, in his third and final year as a starter, Lapeyre will try to lead his team past the semifinals and do something that the Mannings have never done and that is win a state championship. Lee Brecheen, our recruiting guru and owner/publisher of LA Football Magazine, likes what he sees in the Newman quarterback. “Miles Lapeyre can really sling it all over the field and reminds me of Ty Detmer from BYU,” Brecheen said. “He is smart and has a quick release.” Being compared with quarterback greats like Peyton Manning, Eli Manning, and even Ty Detmer is not easy to live up to, but if there is somebody that can, it is Miles Lapeyre. Read more about Lapeyere as he talks about a great season last year, his comparisons between him and the NFL star quarterback family,  losing his top wide receiver last year in Elbert Thomas, and this year’s expectations in today’s recruiting interview!

My name is Miles Lapeyre. I am 17 years old, and I play quarterback.

LAFM: Did you have any offers from colleges? If so, what are they?

I have the opportunity to play for Occidental College in Los Angeles.

LAFM: What were your stats last season?

LAFM: You had one of the best single seasons as a QB at Isidore Newman which is saying a lot. If you had to grade your performance throughout the season, what grade would you give yourself and why?

If it was up to me, I would give myself a B average for last season. I say that because while we had a good season, there was still a lot I felt I can improve on.

LAFM: How has the recruiting process been for you? What is some advice that you would give to your teammates about the process?

The recruiting process has been really rewarding, if anything.  The advice that I would give to my teammates is work your hardest and focus on what you can control. Then, the rest will fall in place.

LAFM: You play in a program that is rich in tradition at QB with Peyton Manning and Eli Manning. Is there any pressure on you to live up to those guys that wore that uniform?

I don’t feel like there is any pressure because of those names. It’s more motivation than anything else.

LAFM: As a sophomore, you helped the Greenies make the semi-finals for the first time since Peyton Manning played quarterback in 1991. What does it mean for you and the program to reach that point once again?

I think it means so much to the program to have made it back as a team to where Peyton once took that 1993 team. For myself, it just meant the world to be out there competing with my best friends. It really speaks on behalf of our coaches and how well they are able to help us play our best game. You saw that when numerous players went down and younger kids had to step in. Coach Stew, Lass, Matthews, Farris, Will, and Goose made that possible.

LAFM: Speaking of quarterbacks, which college or NFL quarterback do you compare yourself to?

I would like to compare myself to the quarterback that I have always looked up to and that is Drew Brees.

LAFM: What are your strengths as a QB?

I think my strength on the field is just having good instincts and being able to keep plays alive with my feet.

LAFM: What are aspect to your game that you need to improve on?

What I am hoping to see improvement on this year is staying in the pocket and delivering passes under pressure.

LAFM: Last year, the team made the second round of the playoffs but lost to Riverside, who went on to play in the state championship. The team also lost to them 55-14 when you were a sophomore. What is it about this team that has really got your number the last couple of years?

Riverside is obviously a talented team, but I really think the past couple of years, at least while I played for them, it’s been about physicality which is something we really have this year.

My individual  goal this season is to spread the ball around and make the players around me better.

LAFM: What are the team goals for this year?

Our goal is to win the state championship.

LAFM: In your opinion, what three things does a quarterback need to be successful?

I think three important things that make a quarterback successful are to be confident, be a leader, and to think quick.

LAFM: A quarterback can’t be successful without his receivers. How much does the loss of wide receiver Elbert Thomas hurt the team and what receiver this year can be that guy for you this year?

Elbert is the man. Losing him is tough and he can’t be replaced. Everyone else is coming back and to say there is one guy that will step up and take his spot is impossible because I think all of our receivers will step up this season.

All of my cousins, uncles, and my dad played for Newman. Two of my uncles, Uncle Phillip and Uncle Chuck, continued to play for Tulane.

I’d have to thank my parents, coaches, and teammates for  how far I have come thus far. They have all taught me so much.