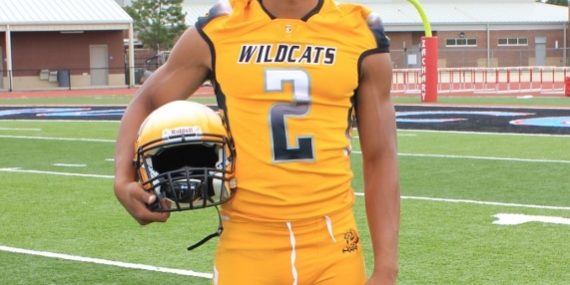 East St. John QB Marquise Darensbourg has had himself a very interesting high school career. He was the starting QB at Destrehan as a sophomore and has transferred to East St. John last year. For whatever team he is on, coaches would love to have a guy like Marquise to come in and be the quarterback for the team. Marquise has also proved that he can play in the big game and produce when he played in the state championship game as a sophomore at Destrehan. He has all the intangibles to breakout this season. “Marquise has all the tools to be a great QB,” Lee Brecheen said.”He’s big, has a strong arm, and has great feet. He has raw talent and I think he can put it all together this year.” The team struggled last year going 2-9 but this season is a new season and with an electric QB like Marquise under center, don’t be surprised if East St. John is one of the most improved teams this year. Get to know Marquise more as he talks about the team that he’s excited to play the most, his goals for the season, and his expectations on his team this season in today’s recruiting interview!

Marquise Darensbourg, 17, and I play Quarterback.

LAFM: Did you receive any offers? If so, from where?

LAFM: What are your strengths as a QB?

I am a duel threat QB.

LAFM: What are things that you need to improve on this year?

I can improve on my strength, arm power, accuracy, and timing.

LAFM: What college or NFL player do you model yourself after?

Dashawn Watson (All-American Clemson QB) and Cam Newton (former Heisman winning Auburn QB and NFL MVP for the Carolina Panthers). I like Dashawn because he does everything right and our coaches teach us this and he’s an example of it. I like Cam Newton because of the way he handles himself on and off the field.

There is no difference. Coaches will be coaches and players will be players.

LAFM: Lee Brecheen told me that you had to split time at QB with Kohen Granier at Destrehan. What are your thoughts on the two QB system?

I am a competitor so I didn’t like it that much but it wasn’t that bad because I was still able to get on the field and play.

My goals are to be Gatorade player of the year and giving my team a state championship.

LAFM: Last year, the team struggled going 2-9. What does the team need to do in order to contend for the playoffs this year?

We need to be more aggressive. We got a couple players coming in and should have a great offense with me at quarterback and the rest of the offense coming back.

LAFM: What are the three things that a QB needs to have in order to be successful?

A QB must be a leader, a hard worker, and must be very competitive.

The state championship game in the 2014-2015 season when I was at Destrehan against Acadiana. We lost the game and it wasn’t my best game stat wise but I felt good about the game and gave my team a  chance to win.

LAFM: Who was the best defender that you played against in the state?

Sully Lache (former Lutcher Defensive Lineman now with Nichols State). Sully hit me one time and I can still remember the hit. It was the hardest hit I have ever taken from a defensive player.

LAFM: Which team on your schedule are you looking forward to and why?

Destrehan. It’s our biggest district rival and we are going to have a huge party after we beat them.

LAFM: How has the recruiting process been treating you? What advice would you give to your teammates about the process?

It picked up during the spring and it’s going pretty fast right now. My advice would be to not stress about it and just play ball.

My dad Malcolm Darensbourg Jr holds the dome record for most solo tackles in a game when he played for Destrehan. My cousin Darius Reynaud played for West Virginia in college and the Minnesota Vikings in the NFL.

LAFM: What separates you from any other QB in the state?

I’m a duel threat guy that can make plays with my arm and my legs.