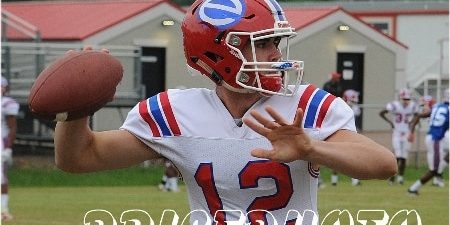 When people look at the greatest quarterbacks to play at Evangel Christian Academy, they look at the Booty brothers but a new name could pop up in the record books this year. His name is Connor Curry. Curry has been the starting quarterback for the last three years and has improved greatly over those years. Connor Curry is in his fourth year as the starting quarterback, which is amazing considering that he is playing for one of the best football programs in the state in Evangel Christian. Last year was his breakout year. He threw for almost 2,000 yards and 19 touchdowns. Even though his statistics improved over three years, the team’s season ended both years in the same fashion and that is falling one game short of going to a state championship. If Connor Curry can make that next step and have an improved season, the Evangel Christian Academy Eagles have a chance of making the next step. If anyone can do it, Connor Curry can definitely can and here is a couple of reasons why. He has played major competition before and has done so in playoff games. This is also his third year starting in this system so he knows the playbook. The final reason is that he has all the intangibles a quarterback needs to be successful. These reasons will make Eagle fans excited to have #12 coming back for another year. Louisiana Football Editor Lee Brecheen believes that Connor Curry can be one of the best senior quarterbacks in the state this upcoming year.

“Connor Curry can end up as one of the best senior quarterbacks in the state,” Brecheen said. “He does everything well, but this is the year that he will prove to big time college players that he can play the game. Connor is very smart and has a very high football I.Q.”

A lot is expected out of the Evangel Christian Eagles every year but especially this year. With all the seniors coming back especially at the game’s most important position, I would be very comfortable if you were a Evangel Christian Academy football fan. Read today’s article on Connor Curry as he talks about his past experiences as an Evangel Christian starting quarterback, the tradition he carries on as the quarterback, last year’s disappointing semi-final loss, this year’s high expectations, and so much more in today’s recruiting interview!

Connor Curry hangs tough in the pocket after taking a hit in the semi finals against Catholic High (B.R.) where they would lose in overtime. After last year, Curry and the rest of the team is motivated to get past the semi finals this year. (Photo provided by Connor Curry)

My strength as a quarterback is my decision making.

LAFM: What are areas that you need to work on?

I need to work on every area of my game. There’s always something I can improve on in every area!

LAFM: Since this is your last year as the starting quarterback for Evangel Christian, what do you want to accomplish?

I want to take it one game at a time, and play hard for my brothers every single Friday night when we step on the field.

LAFM: Last year was a great year as the team went 9-3 all the way up to the semifinals but the team blew a 21 point lead to Catholic High in overtime. How frustrating was that loss knowing that the team was a couple of minutes away from winning the game and somehow lose it in the end especially with a big lead?

We learned from that loss, and we are focused on the year ahead of us. It stinks that happened, but it’s in the past and all we can do is learn from it.

LAFM: Was the team too loose or tight? What did you think was the reason that the team lost that game?

There were a lot of reasons. It wasn’t just one thing.

LAFM: What does the team need to do in order to have a similar season but a much better ending?

We are just going to take it one week at a time, and we know our future is in God’s hands. We want to honor him throughout the year, and grow closer to him as a team.

LAFM: Now, let’s move on to a lighter question. We talked to your teammate Tanner Ash and we asked him what his favorite hobby was. His answer was playing tennis with you. What’s your relationship like with Tanner and the other seniors on the team?

Me and Tanner are like brothers, and we have a great connection! That does not just go for him, but every single other player on the team! We are one big family.

LAFM: What does it mean for you to play for a team that is rich in quarterbacks? (John David Booty, Josh Booty, etc.) Is there any pressure on you to play like the great players that came before you?

There is no pressure. All there is a standard that has been set, and it pushes me every day to be the best me that I can be. The present is all that matters, and what we do with it.

LAFM: What are three things in your opinion that a quarterback must have?

A quarterback must be smart, have great feet, and be a great leader.

LAFM: If you had to compare yourself to a college or NFL quarterback, who would it be and why?

Russell Wilson (former college quarterback with N.C. State and Wisconsin and Super Bowl QB for the Seattle Seahawks). He can run, lead the offense, and makes good decisions.

LAFM: You have a lot of weapons coming back. Can you mention some of the key offensive players that you are counting on this year and some guys that you think will have a breakout year?

I believe all of my teammates on offense will have a great year. My o-line deserves a lot of credit for what they do. Ethan Harvey, Tanner Coleman, Alvin Ford, Joseph Presley, Cam Davis, and Kenny Stokes are all guys that work hard and every play happens because of them.

LAFM: Is there anybody in your family that has played high school, college, or even professional football? If so, who are they, where did they play, and what position?

My brother Tim Curry played QB at Elysian Fields in Texas and also played for the UTEP Miners.

LAFM: What was your favorite game playing for Evangel Christian and why?

St. Thomas More my freshman year in the playoffs was an intense and close game! It was a lot of fun, and I learned many things from that game. It’s always fun playing at Rodney Duron Field.

LAFM: Is there anybody that you need to thank for putting you in the position that you are at today?

God deserves the glory for everything. He has blessed me with my parents who put me in a great school where I have coaches that have some of the best minds in football, and they are also mentors to me. The coaches give us a daily devotion every morning, and we walk every day knowing God has purpose for our life. God loves us and has a plan that is perfect. We just have to trust in his timing for everything.

LAFM: If a college coach came up to you and asked, “Connor, what separates yourself from the other quarterbacks in the state”, what would you tell him?

I do not compare myself to anyone else, but I want to be the best me I can be. I will work hard, and do whatever it is that a coach wants me to do! I care about the team more than myself, and I believe I can do anything that is asked of me! I want to be great.