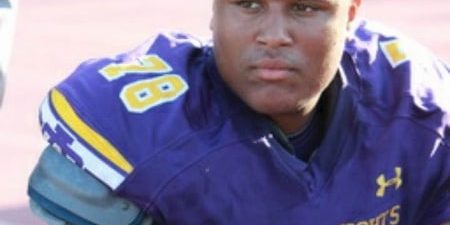 Rendon Miles-Character getting into position before the play.

Rendon Miles-Character, 17, LT
LAFM: What’s your height and weight?
6’3 & 285
LAFM: You play on both sides of the ball. Do you like playing offensive line or defensive line better?
I would like offensive line better.  You have a lot of more responsibility on your hands.
LAFM: What’s your gpa and act score?
My GPA is a 3.72 and my highest ACT score is a 20.
LAFM: What’s your 40 yard dash time, bench, and squat max?
40= 5.1, Bench= 315 lbs, Squat= 495 lbs
LAFM: Were there any stats or awards that you had last year?
2nd Team All- District
LAFM: How many offers did you receive so far? If so, by whom?
I have 3 offers from Troy University, Southern University and Trinity International University.
LAFM: You play in arguably the toughest district in the state. What is it like playing both ways against great teams like Rummel, John Curtis, Brother Martin, Jesuit,etc.?
It’s tough playing in the Catholic League. Every week you have to prepare yourself for Friday or Saturday night mentally and physically. These boys are big and strong so you have to take care of your body.
LAFM: Which of those teams do you think is the toughest team to prepare for and play against?
All of the teams of the Catholic League are tough to play against. There is no way to single anyone out. They all come to play and fight hard all game long.
LAFM: Which position would you like to play in college?
In college, I would like to play offensive guard but the person that I am, I will play any position that my future coach would want me to play.
LAFM: Who’s the best player you have ever played with or against?
The best player I have played against was probably Sci Martin from McDonogh 35. He was tall, lengthy, and fast.  That was only my 3rd start so I had butterflies. I did well that game, I held it down!
LAFM: St. Augustine has had some great talent over the years with the likes of Leonard Fournette and Tyrann Mathieu. What does it mean to you to put on the St. Augustine Purple Knights jersey?
To put that St. Augustine jersey on every weekend means that I represent something more than just a football team. I represent brotherhood, union, and discipline. St. Augustine, just off of the name, gives kids opportunities to play on many collegiate levels.
LAFM: Which player do you model yourself after and why?
I model myself behind Joe Thomas of the Cleveland Browns. I know that I’m not his height, but I try to model my vertical set off of him.
LAFM: What are your strengths as a football player?
My strengths as a football player include aggressiveness, toughness, and nastiness. I am an aggressive player, who’s tough enough to be composed in late-game situations. I am also nasty enough to finish blocks.
LAFM: What do you need to improve on as a football player?
There is always something you can improve on being an athlete. I would say that I need to improve on my hand placement on run and pass game.
LAFM: What advice would you give to a teammate going through the recruiting process?
I would tell my teammates to stay humble and patient. Always remain humble because no one likes a person with a nasty ego. Patience is the key.  The offers will come. All you have to do is produce on the field, coaches will take notice.
LAFM: What is your favorite play as an offensive lineman and why?
My favorite play as an offensive lineman is just a simple pass play, especially at LT during pass plays. I am just on my own island. One vs One, me vs the defensive end. I like having that blind side responsibility on making sure my quarterback doesn’t get hit without him knowing.
LAFM: Do you have anybody in your family that has played high school, college, or even pro ball?
I come from a family of athletes.  I have cousins who played football in high school.  Both my parents were basketball players.
LAFM: What did the team do last year and how are the team’s expectations this year?
Our team’s expectations are pretty high after last season.  We expect to have a winning record. Our team has a lot of chemistry; we hope to put it all together on the field in August.
LAFM: What separates yourself from any other offensive or defensive lineman in the state?
What separates me is that I know that I’m not the biggest guy on the field, but I can assure you that I have the most heart. Last year, my first year starting, I went up against several of the best defensive lineman in the state. I did well enough against them to make All-district, so I count last season as a success. I have enough heart for everyone on the field to have. That is what separates me from the rest.
Categories: New Orleans, Recruiting, Region, Top StoryBy StaffJune 7, 2016