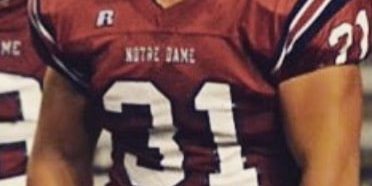 Notre Dame MLB Patrick Burleigh is the definition of a coach’s player. Patrick may not be the biggest or the most athletic player on the field but the one thing that he has is heart. Patrick is a tough, smart, instinctive football player that gives it his all on every play. A middle linebacker is the quarterback and leader of the defense and that is what Patrick is. In order to find out how good Patrick is, look at the defense that he was on. Patrick plays for one of the state’s best defenses in Notre Dame High School and helped lead Notre Dame to a fifth state championship and their first since 2009. Our recruiting guru Lee Brecheen has great respect for what Patrick Burleigh does on the gridiron. “Patrick is an all out tough football player,” Brecheen said. “He is tough, strong and a really good leader. Patrick could play at the 1-AA or D-2 level next year.” Read more about Patrick in today’s recruiting interview as he talks about his career at Notre Dame, being coached by the legendary Lewis Cook, and what the team needs to do in order to repeat as state champions!

Patrick Burleigh (31) joins his teammates in making the tackle.

I led the team in tackles and was named All-Parish, All-District, All-Acadiana, and All-State.

LAFM: Do you have any offers right now?

LAFM: What would be your dream school to play for and why?

LSU. I’ve grown up my whole life pulling for the Tigers and all I know is Purple and Gold.

It is the best feeling I have ever experienced so far in my life.

LAFM: What is the key for this team to repeat as state champions this year?

Focus on the little things. Technique will be key for us.

LAFM: What is it like being coached by a Louisiana high school football legend like Lewis Cook?

It feels more like being coached by family. He is a very humble man which makes it easy to forget how much of a legend he really is.

LAFM: What was your best football game while playing at Notre Dame?

The championship game was my best game. I believe that it was everyone’s best game. We all had one thing on our mind that week and that was winning the state championship.

LAFM: What are your strengths and weaknesses as a middle linebacker?

Last year, I was much better defending the run than the pass, but that is something I have been working very hard on.

LAFM: The defense was dominant last year in your quest for a state championship. What is it about this defense that made it so special?

The chemistry of the defense was outstanding. It’s like we could read each others minds.

LAFM: What college or NFL linebacker do you compare yourself to and why?

Ray Lewis (former NFL All-Pro linebacker for the Ravens). I wouldn’t compare myself to him. but I do try to imitate him on the field.

LAFM: Is there anybody in your family that has played football at the high school, college, or even professional level? If so, who are they and where did they play at?

LAFM: What motivates you to play the game of football?

I simply love the game. Ever since I was a baby, I would watch my cousins play for the pioneers. Being able to play for them now is like a dream come true.

LAFM: What separates yourself from all the other linebackers in the state?

It’s the work that we all put in during the offseason that not only separates me from other linebackers but the whole team from all the rest. The stats I had last year and the ones I will get this upcoming year wouldn’t be nearly as good if everybody else wouldn’t put in all their work.