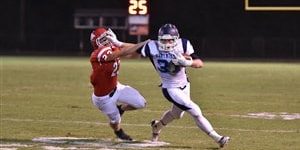 Linebacker Ken Jones from Westminister Christian Academy can be one of the state’s major sleepers for this year. He not only plays linebacker but he also plays FB, QB, and RB proving that he is very versatile but as a linebacker, Ken has a chance to play in a low D-1 school or a high D-2 school. “Ken’s a big time hitter and leader and has great football speed. You can’t judge him on his 40 yard time because his speed on the field doesn’t even compare.  Ken plays a lot like former LSU linebacker DJ Welter because of his toughness, tenacity, and good ball skills. He’s a big time sleeper,” Lee Brecheen said.  Meet Ken Jones in today’s recruiting interview!

LAFM: How many offers do you have right now? If so, who are they from?

I have two offers from  Air Force Academy and Northwestern State.

LAFM: Do you play more than one position? If so, where?

LAFM: What do you do when you are not playing football?

I play basketball and run track. I’m a year round athlete.

LAFM: What did Westminister do as a team last year? How are the expectations different from last year?

We lost in the first round last year. Our goals have been and will continue to be to be district and state champions.

LAFM: What was your best game at Westminister High School?

LAFM: What is the best part about playing linebacker?

I love the physicality of the position. I love collisions.

LAFM: Who do you model your game after and why?

Dick Butkus (NFL Hall of Fame Linebacker that played for the Chicago Bears in the 1960’s), the greatest to play the position. Everyone on the field, including his own team and the officials, were scared of him.

LAFM: What’s the best part about playing football for you?

The brotherhood and relationships you form with your teammates and coaches, the physical aspect of the game,  and the hype

LAFM: Did any of your family members play high school, college, or pro ball?

My dad and both of his brothers played high school football.

LAFM: What is something interesting about yourself that many people don’t know about?

I actually had heart surgery my freshman year to fix a condition called SVT.

LAFM: If a college coach asks you what makes you different from any other linebacker, what would you tell them?

The way I fly to the ball and the motor I play with, it never stops running.

LAFM: Who is the toughest player you have ever faced or played against?

It’s a tie between Gabe Fuselier and Jason Pellerin, both from Catholic High NI.

LAFM: What is your favorite team to play against? Why do you love playing that team?

Opelousas Catholic, our schools have been  arch rivals for decades, I grew up watching absolutely insane games against OC.

LAFM: What advice would you give to a teammate who is dealing with the recruiting process?

Don’t worry about it too much and enjoy high school football while it lasts. Stay humble.