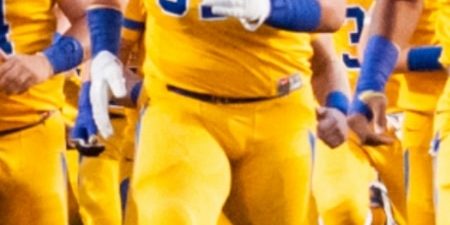 After looking at Josh Tourelle on the field, you would think that he would play in the NFL not in high school. He is 6’3 around 230 lbs which is the normal height and weight for a linebacker in the NFL level. This year, St. Paul’s might have one of the best defenses in the Northshore region with Tourelle and teammate Hayden Ocman leading the group. This might be one of the best duos in the state as Tourelle is one of the best against the run and Ocman is one of the best pass rushers in the state. Tourelle can blow up running plays pretty quickly but he is not just a run stopper. He is very instinctive and can rush the passer as well. Every coach dreams of having a linebacker like Josh Tourelle because he is tough, big, and can hit you in the mouth. He is also a great leader for his team. Our recruiting guru Lee Brecheen thinks that Tourelle reminds him of Michael Mauti, who was a standout linebacker at Mandeville High School as well as the Penn State Nittany Lions and is currently with the New Orleans Saints. “Josh Tourelle is a tough and ideal mike linebacker that will hit you,” Brecheen said. “He can play D-I. If he continues to work, he will end up like a Michael Mauti and maybe even better.” Hayden Ocman gets a lot of credit and does deserve it but don’t overlook his teammate Josh Tourelle because he is the glue to the Wolves’ defense in 2016. Read more about Josh Tourelle as he talks about the season, recruiting, his teammate Hayden, his workout plan, and much more in today’s recruiting interview!

The best players are the ones that perform the best on the biggest stage and that was what Josh Tourelle did in this semi final playoff game against John Curtis where he had 17 tackles, 5 TFL’s, a sack and a forced fumble even though it came in a losing effort 37-30.

LAFM: What is your 40 yard dash, max bench press, squat max, and vertical?

LAFM: How many offers have you received so far and what schools have offered you?

One offer from Southeastern Louisiana University

LAFM: How has the recruiting process been treating you? What is some advice that you would give to a teammate about the process?

It has been treating me well. I’ve just been going with the flow of everything and following up with coaches who have shown interest and contacting coaches of programs that I have interest in. My advice to my teammates is to keep working towards your goals.

LAFM: Last year, the team had a really good season going 8-2 and going to the semifinals losing to one of the best high school programs in the country in John Curtis 37-30. There are high expectations for this team this year. What is the next step for the team?

The next step for us is to get ourselves into the state championship. We are all working towards that one goal as a team and that starts with doing all of the little things right.

LAFM: What are areas to your game that you feel like that you are strongest at?

The strongest part of my game is stopping the run and my vision for the ball.

LAFM: What do you need to improve on this year?

This year, I’m really working to improve my sideline to sideline lateral movement.

My goals are to be the leading tackler in the state in all divisions and the best team leader that I can be.

LAFM: Who was the best player that you played against from last year? Why?

I wouldn’t say there was one player so the best player(s)- Jesuit Offensive Line.  They were a very big, physical, and aggressive front five.

LAFM: Which team on the schedule are you looking forward to playing the most?

I’m most looking forward to play Jesuit at home this year. We all have a chip on our shoulders from last year’s loss.

I like working out, fishing, and hunting in the offseason.

LAFM: You are a big guy for a high school linebacker and you like to workout. Do you have a workout plan that you use that helps you bulk up for the season?

Our weight lifting program is definitely a program to bulk our players up. Jesse Kellum has given me and all of our players the best opportunity to succeed in the weight room and on the field.

Being compared to Michael Mauti is an honor considering that he is the most successful linebacker to come out of the Northshore area. I compare myself to Kendell Beckwith (former QB and LB with East Feliciana, current middle linebacker for LSU). He is a huge presence while he’s on the field with his run stopping abilities and his coverage skills.

LAFM: What was your best game in a Wolves uniform?

My best game last season was in our final game against John Curtis. I had 17 tackles, 5 TFL, a sack and a forced fumble.

LAFM: Lee Brecheen thinks Hayden Ocman is one of the best defensive ends in the state. What is it like playing with Hayden? Is there anybody else on the defense that is poised for a breakout season?

Having Hayden on the field with me is definitely an advantage because I do believe he is one of the best defensive ends in the state. He has great containment to the outside and always turns running backs to the middle of the field. I think our defense as a whole will have a break out season. We have a lot of really good experienced players who love to hit.

LAFM: If a big school like LSU or Alabama asked you, what separates you from any other athlete in Louisiana, what would you tell them?

I think my leadership makes me different from most players. I love being vocal on and off the field and helping the the younger guys understand their roll is a big part in our program’s success.