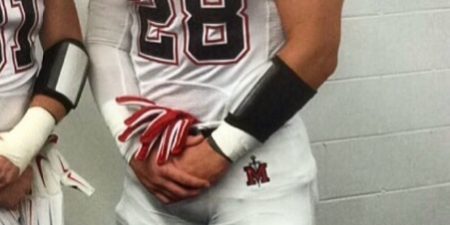 Star St. Michael linebacker Mitchell Roe did not always play football. If you would ask his family and friends, his major sport was baseball which was his best sport. He still does play third base as well as left field for the baseball team. He even has a baseball offer from BRCC but many would argue that he is just as good in football as he is in baseball. Roe played a little football in middle school and did not consider playing football at St. Michael’s until his coaches needed more players. Roe volunteered last year to play and had a huge season. In his first season as the starting linebacker at St. Michael, Roe stepped in and played like a pro. He had almost 90 tackles, 3 sacks, and even a couple of touchdowns. He was also named 1st team All-District. Now, in his second year as the starting linebacker for the Warriors, Roe will try to have a better season and prove to scouts that he can play football in the next level as well. Louisiana Football Magazine’s Lee Brecheen says that Mitchell Roe is a very good prospect for baseball but can also be a sleeper for football as well. “Mitchell Roe is a very good athlete.” Brecheen said. “Roe is not the biggest guy but he can hit you and can make plays. He is a big baseball prospect but can play at the D-III level if he wants to play football.” Mitchell Roe is still raw in terms of how many years he has played football but judging his numbers from the year before, it’s scary what his second year will look like. Read more about Mitchell Roe as he talks about balancing the two sports, why he wanted to play football, his individual goals as well as the team, and so much more in today’s recruiting interview.

Mitchell Roe playing his other sport baseball where he is currently being recruited by BRCC.

Mitchell Roe communicating with the rest of the defense during a game.

LAFM: What is your 40 yard time, max bench press, and max squat max?

LAFM: What were your stats and accomplishments from last season playing football?

LAFM: You were always focused on baseball. What made you decide to play football at St. Michael’s?

All my friends and coaches wanted me to play.

LAFM: Do you have any offers from any colleges for football or baseball?

I have an offer from BRCC for baseball.

LAFM: What sport do you want to play in college more?

I rather play baseball, but either is fine.

LAFM: What position do you play for baseball?

left field and third base

LAFM: Now talking about football, What are the strengths to your game at linebacker?

My strengths are reading the the line and the run as well as filling holes.

LAFM: What are areas do you need to improve on?

I need to improve on pass coverage.

LAFM: Last year, the team made the playoffs but lost to Teurlings Catholic. What is the next step for the team this year?

We need to keep working hard, get back to the playoffs and win our first ever playoff game in school history.

My goal is to be able to improve my pass coverage, filling the open holes more aggressively, and helping my team win as best that I can.

LAFM: What are the team goals for the season?

Our goal is to play every quarter 110%, never give up on a play and work together to win.

I like to workout, spend time with friends and take time off before baseball season.

LAFM: What was your best game playing football at St. Michael’s and why?

Livonia, because I had 15 tackles and also scored a touchdown.

LAFM: Who was the best football player that you have played against last year and why?

Clyde Edwards-Helaire, from Catholic High (B.R.), because he was so quick and fast.

LAFM: What athlete ( can be any sport) do you look up to and why?

Luke Kuechly, Pro Bowl linebacker from the Carolina Panthers, because I can learn from him.

LAFM: Who are some people that you need to thank for putting you in this position that you are at today?

My parents, coaches, and friends are people that I like to thank.

LAFM: What separates you from any linebacker in the state?

I’m willing to work hard and learn everything that I need to to be better. I also study a lot of film on other teams.