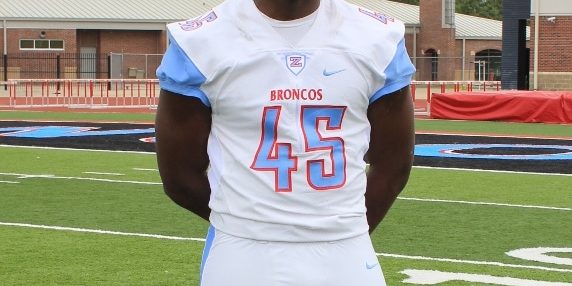 Zachary linebackers Herbert Cummings and Donovan Perkins make up one of the best line backing groups in the entire state. Last year, it was the offense making the headlines with star quarterback Lindsey Scott leading the team to a state championship. A lot of people would say that the offense was the number one reason why Zachary would go on to win the state championship for the first time in school history but the defense was also a factor in carrying the team as well. The saying is that defense wins championships and that statement is true. The defense might have not been as dominant as a championship team like Notre Dame from last year but the defense made the plays to help the team win and give the ball to its explosive offense. Now that Scott is gone, it is up to the defense to carry the load as Zachary settles in at the quarterback position and what two players can do that more than Cummings and Perkins. A couple of months ago, we talked about Donovan Perkins. In today’s recruiting interview, we will talk with the other star linebacker of the group in Herbert Cummings. Like Perkins, Cummings isn’t highly recruited and may not be the biggest and fastest linebacker in the state but he has all the qualities that you want in a line backer according to Louisiana Football Magazine’s Lee Brecheen. “Herbert Cummings is very tough, instinctive, a great football player, and most importantly a leader,” Brecheen said. “Players should be recruited not just on their 40 time or any other measurement but if they can play the game of football and Cummings can.” With Cummings and the rest of the defense coming back, it sure looks like that the defense might carry the team if Zachary wants to repeat as state champions. Read more about Herbert Cummings as he talks about winning the state championship last year, his relationship with Donovan Perkins on the field, and more in today’s recruiting interview!

Hebret Cummings during practice as he gets ready for the upcoming season. (Photo courtesy of Verntura Photography)

LAFM: What’s your name and position?

LAFM: Have you received any offers from colleges? If so, from whom?

I have no offers as of right now.

LAFM: What is the best part about the recruiting process for you?

Traveling to all the different schools is the best part.

LAFM: Last year, the team won the first ever state championship for Zachary High School. How special was that team last year and what was it like being a part of that?

Last year’s team was special because it was always a positive vibe with this team.

LAFM: What does the team need to do in order to go back to the dome once again?

We need to be physical and play as a team.

LAFM: The offense loses Lindsey Scott who was the Louisiana Gatorade player of the year last year. How bad is that loss for the team and how is the new quarterback doing since you play against him in practice?

We have a couple of guys competing for the job and they are all looking good.

LAFM: You and Donovan Perkins are one of the best line backing duos, if not the best, in the state. What is your relationship like with Donovan and who is another defensive player that you think can step up this year?

Donovan and I are more like brothers rather than teammates. I think everyone on both sides of the ball can step up.

LAFM: What sets Donovan and you apart as linebackers?

We both each have our own playing style.

LAFM: What is it like being coached by Johnny Nagle (former LSU player and college coach) and Chris Carrier (former LSU All-SEC Safety and NFL player) and what is Head Coach David Brewerton like during practice?

Practice is always at a high tempo with those guys and there are always a lot of jokes.

LAFM: Zachary has a tough schedule this year. You play teams like Catholic (B.R.), Scotlandville, which was a great game last year, and Calvary Baptist just to name a few. Which team are you most excited to play against?

I wouldn’t say that one is more exciting than the next one but I’m looking forward to them all.

LAFM: What was your best game in a Zachary uniform?

It was definitely the state championship game.

LAFM: Who was the best player that you faced against last year?

We’ve played a lot of good athletes. I can’t really name one that sticks out to mind.

LAFM: Is there anybody in your family that has played high school, college, or even pro football? If so, who are they from?

No. There is nobody in my family that has played football.

LAFM: What do you do for pregame? Are they any supersitions or anything that you do before a game that pumps you up?