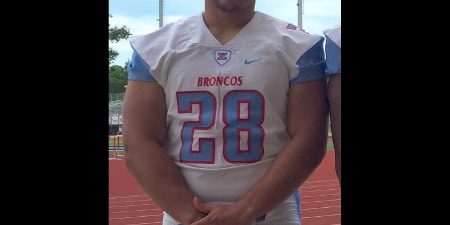 Zachary High School Linebacker Donovan Perkins may not get all the glory like former Zachary dual threat QB Lindsey Scott but he gets the job done on defense which helped Zachary clinch their first ever state championship last year. Donovan may not be the biggest player but that doesn’t stop him from making plays all over the field. “Donovan’s not a tall linebacker as he is just under 6’0, but he can play. He is well coached by former LSU football player Johnny Nagle. He is hard-nosed, instinctive, quick and smart and can turn into a great linebacker at the next level,” Lee Brecheen said. Get to know more about Donovan in today’s recruiting interview as he talks about recruiting, his favorite football moments , and how he will help bring Zachary another state championship. 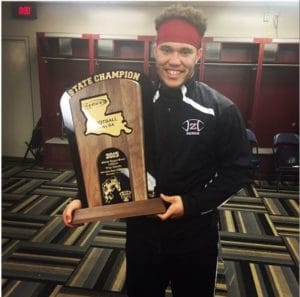 Donovan Perkins holds the state championship trophy from last year hopes to hold up a second trophy later this year.

3.1 waiting on act score just took it 2 weekends ago

LAFM: Have you received any offers? If so, how many and by whom?

LAFM: What is the best part about the recruiting process and what is the worst part?

LAFM: What advice would you give to a teammate going through the recruiting process?

LAFM: What were your stats last year at Zachary?

Its means a lot from our first summer practice that was our goal and throughout the season it was talked about a lot so to finally bring back the championship to Ztown was great! Our fans are the best fans in high school football!

LAFM: What does the team need to do to return to the dome and try to win it again?

We have to come with the same hungry attitude we had every game and at practice because as Coach Brewerton says last years wins will not win us any games this year.

LAFM:  What are the strengths to your game?

My strengths are I’m a leader. I’m fast so I beat linemen to the hole a lot. I am physical and I diagnose plays very fast

LAFM: What are things you need to work on?

I’m going to work on learning more offensive concepts so I can know where the ball is going and where I need to be.

My individual goals are making All-State and 5-A MVP , and leading the stat board in all phases of the game.

LAFM: What are the team goals this season besides repeating as state champions?

Some team goals are to play full speed every play, play for the guy beside you with the ‘Z’ on his chest, and to win every game on our schedule

LAFM: Which linebacker do you look up to the most?

I look up to James Harrison because he has a crazy work ethic and plays the game of football in a violent manner.

LAFM: What motivates you to play football every Friday night?

My family is my biggest motivation. That includes the city of Zachary they are like family

LAFM: What teams are you looking forward to play this year?

I am looking forward to playing Scotlandville, Catholic High-BR, and Calvary Baptist because the best teams bring the best out of my team

LAFM: Who is the best player that you have faced last year?

Levi Lewis (Scotlandville dual-threat QB) is the best player I faced last year. He is shifty and can also throw on the run.

LAFM: What is it like to play under big names like Johnny Nagle (former LSU player and college coach) and Chris Carrier (former LSU ALL-SEC Safety and NFL player)?

Both those guys played college football before and Coach Chris played in the NFL so both those guys put us in the right position to succeed and make plays. Both guys are very knowledgeable of the game and I love playing for them.

LAFM: What separates you from any other linebacker in the state?

I refuse to be outworked by anyone! I’m big enough to take on linemen and fast enough to run with defensive backs and I’m a wrestler so I’m very mentally and physically tough.