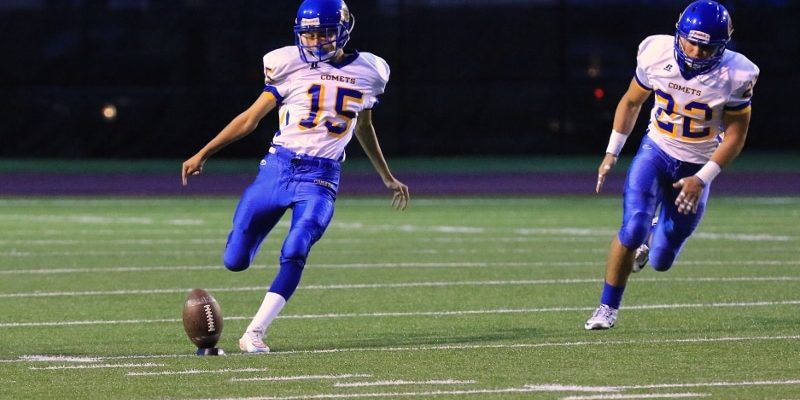 St. Charles Catholic High School Kicker Andrew Rodrigue may not get the attention of some other kickers in the state like Mandeville Kicker Joseph Bulovas but he can still get the job done as he only missed one field goal last year. This is what Lee Brecheen has to say about the senior kicker. “Andrew is a big time sleeper for 1-AA. programs and with the right school, he can go D-1. He has a D-1 leg so he has the ability to go to a small D-1 school,” Andrew is a reliable kicker for St. Charles Catholic and Coach Frank Monica is glad to have his field goal kicker for another year. Get to know Andrew a little bit more in today’s recruiting interview.

Andrew Rodrigue attempting one of his 15 field goals last year.

LAFM: Name, age, and position?
Andrew Rodrigue, 17, Kicker
LAFM: Do you play more than one position? If you do, which position is better?
Yes, I also play receiver. I’m a better player at kicker.
LAFM:  Have you attended any kicking camps over the offseason? If so, what are they?
No, first one will be the mint at a Kohl’s kicking camp.
LAFM:  What is your GPA and ACT?
2.75 GPA and have not taken the ACT.
LAFM: What were your stats last year?
Missed 1 out 15 field goals
LAFM: How many offers have you received last year?
No offers.
LAFM: How long have you played football?
4 years
LAFM: What is your longest kick in a practice or in a game?
52 yard field goal in practice during a two minute drill and the longest in a game was 42 yards
LAFM: What are your individual goals for this season?
My goals are not to miss any field goals and have many touchbacks for kickoffs.
LAFM: What did the team accomplish last year?
State semi finals.
LAFM: What are the team goals this year?
To go to the dome.
LAFM: What was your best game at St. Charles Catholic?
The state quarter final game was my best game. We won 13-12.
LAFM: What kicker do you model your game after?
Mason Crosby because I was always a fan of the Green Bay Packers and I like his kicking.
LAFM: How has the recruiting process been treating you so far?
I talk to lots of coaches on free time.
LAFM:  What advice would you give to a player that has to deal with the process?
Don’t expect to be recruited. Playing a high school sports shouldn’t be because you want to be recruited. Just go out there and have fun and if you’re lucky enough to get recruited, then take advantage of it.
LAFM: What three things a kicker must have to be successful?
Good leg, work ethic, dedication
LAFM: Do you play other sports besides football? Do your other hobbies or other sports help you in your kicking game?
I play soccer and run track so I get leg power and endurance from those 2 sports.
LAFM: Is there anybody in your family that has played high school, college, or even pro football?
I have 3 sisters so no football.
LAFM: What do you want to do after your playing career is over?
Interior architect.
LAFM: What separates you from any other punter or kicker in the state?
I feel that playing for St. Charles Catholic that I have a hard coaching staff that pushed me to be the best I can.
Categories: New Orleans, Recruiting, Region, Top StoryBy StaffJune 15, 2016