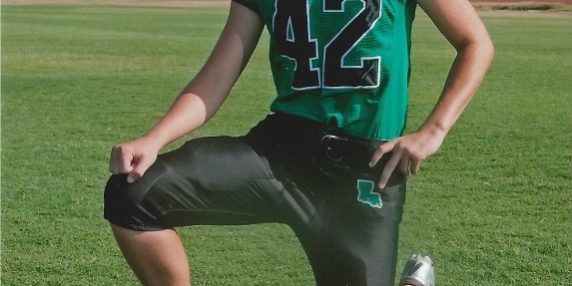 Everybody talks about Mandeville Kicker Joseph Bulovas being the best kicker in the state but another kicker from Lafayette High School is not far behind. Lane Perrin has a very good leg as he is capable of kicking 40 plus yard field goals and can also kickoff deep into the endzone. He is also a very accurate kicker as he made all of his extra points last year and he missed one field goal. LA Football Magazine’s recruiting guru Lee Brecheen thinks that he has all the tools to play at a D-1 level. “Lane’s one of the best kickers in the state,” Brecheen said. “I actually watched him kick a 40 yard field goal with ease in a jamboree. In Week 3, he actually hit 3 field goals of 30 yards or more which is rarely heard from in a high school game.  He’s a big time sleeper for D-1.” Get to know Lane even more in today’s recruiting interview as he talks about his goals for this year, the recruiting process, and his influences!

LAFM: What’s your name, age, and position?
My name is Lane Perrin. I’m 17 years old, and I’m a kicker.
LAFM: What’s your height and weight?
I’m 6’1” and I weigh 175 lbs.
LAFM: What’s your ACT score and GPA?
I have a 25 on the ACT with a 3.0 GPA.
LAFM: Did you attend any kicking camps over the offseason? And if so, where?
I’ll be attending the Hammer Kicking Top 40 Camp in Orlando, Florida beginning July 5th and ending July 10th.
LAFM: Do you have any offers right now from colleges? And if so, who?
No offers yet.
LAFM: How has the recruiting process been for you?
It’s been slow, considering I haven’t gotten any offers, but I’m hoping that will change during my senior year.
LAFM: What advice would you give to a player that has to go through the process?
I definitely suggest starting your college search early. Find out what you’re interested in. Find colleges with that major or area of study and then attend camps in the area or contact those coaches for those schools.
LAFM: How long have you been playing football?
I’ve been playing since my freshman year.
LAFM: Do you play any other sports that help you with your kicking game?
I play lacrosse, although that doesn’t quite target my kicking game. It does keep me in shape during the offseason though.
LAFM: What were your stats and accomplishments as a football player last year?
My stats were 30 for 30 on PATs and 4 out of 5 on field goals. I also received the 2nd Team All-District Award.
LAFM: What was the longest field goal you have ever made in practice or in a game?
I made a 50 yard field goal at practice.
LAFM: In one game, you kicked three field goals that were over 30 yards. How much does it help your confidence when the coaches send you on the field to kick a long field goal attempt?
If the coaches are confident in me, then I’m confident too. When they send me out for something they think I can handle, it relieves any doubts I have. And when I’m confident, I tend to preform better.
LAFM: What was your best game at Lafayette High School?
So far, my best game was the one we played against Barbe at our school. I was 3 for 3 on field goals and 3 for 3 on PATs.
LAFM: What are the team’s goals this year?
Well we just got a new head coach, a new offensive coordinator, and a couple new defensive coaches. They’ve changed our formation and playing style, so one of our goals is to definitely get adjusted to that, but we’re confident in them and hope to make a run in the playoffs. It’s definitely a change for the better.
LAFM: What are your individual goals for this year?
I want to have a 95% + conversion rate on field goals and PATs, have 15 to 20 touchbacks, and my #1 goal is to make the All-State team.
LAFM: What are your strengths as a kicker?
My accuracy is my greatest strength.
LAFM: What are some things you need to work on?
I need to work on my power so I can increase my field goal range.
LAFM: Which kicker in college or the NFL do you compare yourself to?
I like to compare my accuracy to Dan Bailey’s, from the Dallas Cowboys. He’s the most accurate kicker in NFL history. I’m not saying I’m the most accurate in high school but accuracy is my greatest strength.
LAFM: Is there anybody in your family that has played high school, college, or pro football? If so, who and where did they play?
I’m the first person in my family to take the football route.
LAFM: What separates you from any other kicker in the state?
I’m really proud of my accuracy and consistency. Most of the time I’m able to kick the ball straight through the middle of the uprights. I have pretty good speed for a kicker, which helps on kickoff coverage. Last year we didn’t allow any kickoffs  to be returned for a touchdown.