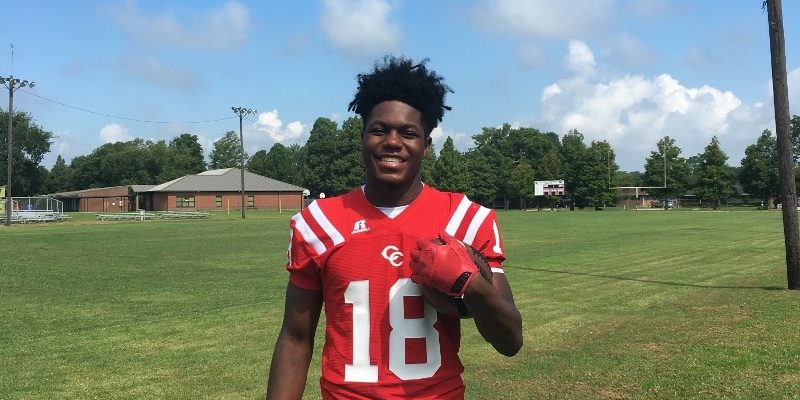 Central Catholic FS Ja’len Johnson is one of the most underrated safeties in the whole state and at the same time, he is one of the best in the entire state. Johnson can start for any team in the state whether it be a 1-A team or a 5-A team. Johnson is a big safety at 6-3, 200 pounds, can run a 4.5/40, and will hit you hard on every play. If you are a scout and are looking for big and physical safeties, Ja’len Johnson should be on top  of a lot of people’s lists. The only reason that Johnson might not get the recognition he deserves is that he plays for a 1-A school even though the school he plays for is a 1-A powerhouse in Central Catholic. As of right now, Johnson has made his commitment to the University of Louisiana Lafayette. The Ragin’ Cajuns have got themselves an outstanding football player who could potentially make All-Conference one day. Just recently, Louisiana Football Magazine editor and T.V. Host Lee Brecheen saw the hard hitting safety play in Central Catholic’s loss against Ascension Catholic and thought he was even better than advertised.

Jalen Johnson can make All-State even in 5-A,” Brecheen said. “Johnson is tall and he can run. The thing is that I don’t know if he is going to keep growing and be an outside linebacker or stay at strong safety. He could play either of those positions and might grow over 230 pounds. He has greatness written all over him. I don’t think that he has reached his potential yet which is a really good thing because I believe that he is already a D-I player.”

If Johnson has not reached his potential yet, then that is a scary sight for future offensive coordinators. Whether he stays at strong safety or moves to outside linebacker, Ja’len Johnson proves that he is an impact player on the defensive side of the football. We caught up with the All-State Free Safety from Central Catholic as he talks about the disappointing early start to the season, last year, his football role model, his commitment to ULL, and so much more in today’s recruiting interview! 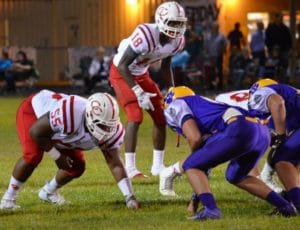 Ja’len Johnson not only plays safety but can lineup anywhere even at outside linebacker. (Photo provided by Ja’len Johnson)

LAFM: What is your 40 yard time, max bench press, and max squat,?

My stats  were 13 breakups, 68 tackles, 4 interceptions, and 1 forced fumble.

I just felt right at home over there and very comfortable. It’s a nice place and it’s somewhere that I can reach my potential.

LAFM: This year, the team was expected to be one of the best teams in 1-A but the team is 1-2 and has lost the last games by a total of 14 points. Why has the team struggled in the last two games?

I feel like that we lost those last two games because coming into this year, we thought it was just going to be easy since everyone says that we are going to get to the championship game but it is really a reality check and now we just have to go back to work and keep pushing to get better to win our next couple of games.

LAFM: What would you tell the team right now to try and get back on track?

We just have to keep working and play like we are supposed to play.

LAFM: Lee Brecheen said that you made plenty of hits in the Ascension Catholic game. Where do you get that aggressive mindset from?

My aggressiveness came from us being down. I feel like we should have won that game and I did everything in my power to try and win.

LAFM: Coach Tommy Minton is one of the best coaches in the state. What is it like being coached under him?

It is great having him as a coach because he has taught me a lot that I didn’t know before he came to Central Catholic.

LAFM: What are your strengths as a safety?

My strengths as a safety is that I can come down hill and make a play in the backfield. I can also cover people as well.

I need to improve on my aggressiveness on my coverage. I need to jam more people and not let them get those little two step outs and things like that.

LAFM: What is the game that you are looking forward to playing the most?

Vermilion Catholic is the game that I am looking forward to the most because since my 8th grade year, I have player them and we have not actually beat them in a full game.

LAFM: Last year, the team won over 10 games and made the second round of the playoffs. How special was that team last year and what was that experience like for you?

That team was really special because we just believed in each other and we never gave up no matter if we were losing or what. The experience was great because of the things that we accomplished.

LAFM: Is there a college or NFL player that you model your game after? Who is it and why?

Richard Sherman (former defensive back for Stanford and current All-Pro CB for the Seattle Seahawks) because he gets the job done and locks down great receivers.

LAFM: What was your favorite team growing up?

I loved the New York Giants growing up.

LAFM: Do you play any other sports besides football?

I play basketball and I run track.

LAFM: Is there anybody in your family that has played high school, college, or even the NFL? If so, who are they, what position do they play, and where did they play?

I have a numerous amount of family members that have played high school sports and a lot of people in my family has played not only college football but college basketball as well.

LAFM: Is there anybody that you want to thank for putting you in position that you are in today?

First, God and also my mom and dad because they sacrifice a lot to put me in a position to succeed in what I do.

LAFM: Is there any advice that you want to give to the younger players on your team?

A year can change anything. Just keep working and don’t give up on your dreams!