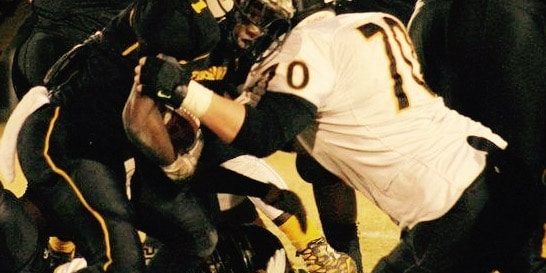 Arcadia Center/Defensive end/Defensive tackle/Long Snapper/Full Back Dustin Mills is one of the most versatile players in the state with the many positions that he can play. Proving his versatility even more, he is playing a new position this year at tight end. Just call him a Swiss army knife as he does everything on the football field except playing quarterback but who  knows he might add that to his list of positions that he plays soon. Dustin is one of those tough guys that you would picture in the old days of football when the best players play all the positions instead of one position or at one side of the football field. Dustin has the skills and the determination to become a very good football player. Just ask longtime scout Lee Brecheen if you don’t believe  me. “Dusty is a great defensive lineman and has great feet for his size. Dustin can grow into an offensive lineman or defensive lineman in college. It depends with the school he signs with but he can play both. He can become a very good player at the D-1 level,” Lee Brecheen said. Read more about the talented Arcadia High School football player Dustin Mills in today’s recruiting interview!

Arcadia Center Dustin Mills (70) blocks as a center at the point of attack.

LAFM: If you play more than one position, which position do you like better?

LAFM: What is your 40 yard dash time, bench max, and squat max?

LAFM: Did you attend any football camps over the summer? If so, what camps did you attend?

LAFM: How many offers did you receive so far? If so, by whom?

Several Universities, (ULL, ULM, Mississippi College, Arkansas Tech, and Southern Arkansas), have shown a great deal of interest, but I have not received any official offers as of yet.

It has difficult but very fun.  It is nice to get noticed by colleges and Universities because its shows that when your head coach always said hard work pays off, you get to see he was right.

LAFM: What advice would you give to somebody else going through the recruiting process?

Be proactive.  Focus on this year and this season first.  Your first commitment is to your team and its success, and in the end it will pay off for you as an individual if you are a teammate first.

LAFM: What were your stats and awards last season?

My determination to give 110% every play is my greatest strength.  It is that effort that allows me to explode off the snap, to move quickly, and to never give up on a play.

Tight End is a new position for me this year, so it is challenging to learn the different skill sets required.

LAFM: What was your best game at Arcadia?

This year’s Homecoming Game against Cedar Creek.  I just felt like the entire team was in a zone, including me.  I made 6 solo tackles, 4 assists, and a TFL.  It was the first time we beat them in a long time, and it was our Homecoming.

Winning at Basile in the State Quarter Finals, in the last 4 seconds, when everyone on the Basile side of the stands was convinced they had won.  The home team crowd was singing “na na na na, na na na na, hey hey hey, goodbye!” and then suddenly their entire side of the stadium fell silent as Trey Cortez caught a touchdown pass from Dan Fields and our’ burst into cheers.

LAFM: Who is the player (college or pro) that you study in order to get better?

Cameron Jordan is an amazing Defensive End, and I try to match his skills, but I have found that the best thing for me to do is to study my own films.  From watching my own success and failures, I can improve on specific aspects of my game.

LAFM: What position is harder to play at in your opinion? Why?

Tight End is definitely more challenging to me because I have never played that position until this year.

Last year Arcadia made it to the Class 1-A State Semi Final Game for the first time in 50 years.  Unfortunately, we lost to our district rivals.  This year’s goal is to get even further.

LAFM: What team are you looking forward to play the most?

Haynesville because they have a long time successful program and have dominated our district for several years, earning several state titles along the way.  It is our turn to show that they are not the only football power house in District 1-1A.

LAFM: Who is somebody on this year’s team that can have a breakout year?

Anthony Boston Jr. He is going to dominate offensively and defensively.

LAFM: Is there anybody in the family that has played high school, college, or even pro football?

Yes, my Step Father, who is on our coaching staff, played High School football.

LAFM: If a coach asked you what separates yourself from any other center/defensive end, what would you say?

Effort, determination, and heart.  I refuse to be beaten.  I enjoy being able to keep pressure on my opponent the entire game, and see it in his eyes when I finally break him down. (I LOVE when that happens)