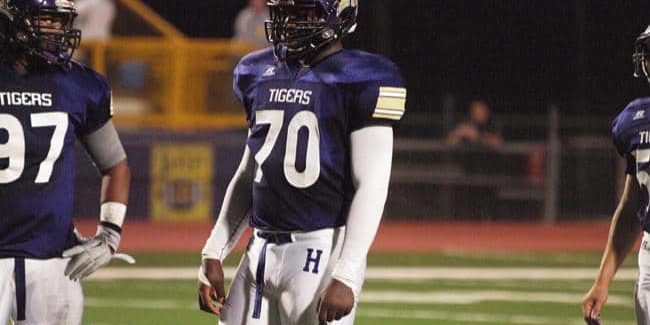 Hahnville DT Tre’Vas Chambers has all the tools to become a great defensive lineman. He’s big enough to play on the defensive line at a D-1 school and at the same time, he has the quickness to chase down running backs in the backfield and to get around offensive lineman. He can stuff the run and rush the passer.Best of all, Tre’Vas is an unselfish football player that will help his team do little things in order for his team to win. Our recruiting guru Lee Brecheen thinks that Tre’Vas really caught on at the end of the regular season and can become even better this upcoming season. “Tre’Vas is a major sleeper,” Brecheen said. “He really came on late his junior year and if he has a great senior season, he can get some power five school offers. Tre’Vas plays hard and he also gained some weight which will help him as well.” If Tre’Vas lives up to his potential this season, he will not only get offers but he will get some offers from some major schools. Read more about Tre’Vas as he talks about the recruiting process, his influences, and his expectations for the season in today’s recruiting interview!

My ACT is 18 and my GPA is a 2.0. I’m committed to working hard this year to improve my ACT and GPA by the end of my senior year.

I made 2nd team all district and missed 1st by a vote.

I wasn’t able to make it to any summer camps due to family matters.

LAFM: Did you receive any offers? If so, from where?

I have not yet had any formal offers but I have meet with many college coaches this spring.

LAFM: How has the recruiting process been treating you? What is some advice that you would give to a teammate about the process?

The recruiting process has treated me very well. It’s giving me the opportunity to listen to college coaches speak. Some advice I would give a teammate would be to stay humble and stay focused on their academics and the game and to always be respectful of themselves, coaches, and teammates.

Some of my strengths as a defensive linemen is that I could hold my ground, I have good footwork and technique.

Some of the things I need to improve on is first my academics and second my handwork.

LAFM: What was your best game at Hahnville?

The best game I played at Hahnville would be against Terrebonne.

LAFM: The team made it pretty far into the playoffs reaching the semifinals before losing to Zachary. What does the team need to do in order to get back to the dome?

As a team, we need to be able to trust each other. Our quarterback needs to trust the offensive line to block for him. The offense needs to trust that the defense has their back and they got ours, but individually, people need to know it’s not about how much glory you get. It’s about helping the team win.

LAFM: What teams are you looking forward to play this year?

My goal for this season is to out match the man across me in skill and technique and to be a leader on and off the field.

The team goal for this year is to get over this quarter final hump and make it to the dome.

LAFM: What is the best player that you have played against?

I honestly would have to say that the best player I went against would be (Kellton Hollins) former center from Zachary and current center for TCU. He was just good at his craft and I wasn’t mentally prepared for what happened that night.

I compare myself to Sheldon Rankins that played for the Louisville Cardinals and now the first round draft choose for the New Orleans Saints. He’s a extremely hard worker on and off the field. He’s respected around the community and he doesn’t get in trouble off the field.

LAFM: Is there anybody in your family that has played high school, college, or even professional football? If so, who and where did they play?

My uncle Troy L. Major played for Hahnville on the defensive line.

LAFM: Is there anybody that you need to thank for putting you in this position that you are in today?

I first would have to thank the Lord for getting me this far and my family. But I really want to thank Coach Salt for all that he has done for me since he got to Hahnville. Coach Salt is like my second father and I’m blessed to have such a amazing coach that cares and us apart of my life.

LAFM: What separates you from any other defensive lineman in the state?

What separates me from the rest is my mind state. Even when we’re down or lost, my mind doesn’t drift to blaming others. What we need to do to get better as a team.