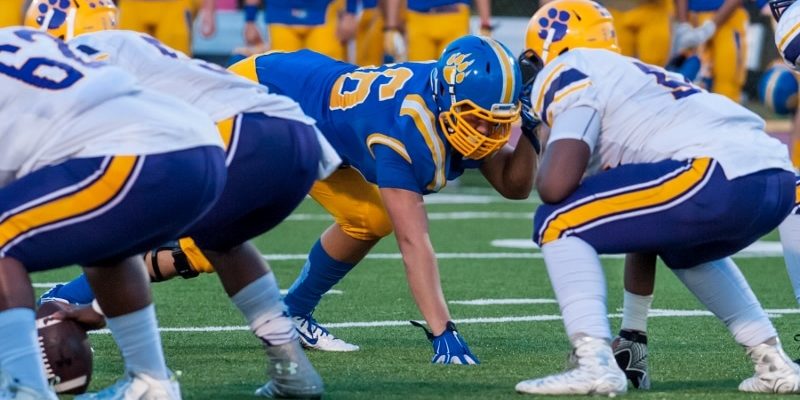 St. Paul defensive lineman Hayden Ocman is one of the best pass rushers in the state. He has the ability to bull rush offensive tackles and to beat offensive linemen with speed and quickness. He also can go sideline to sideline to stop the run. Hayden is very athletic and has a chance to develop into a very good football player. “Hayden is tall and lean defensive end who is very aggressive. He also has a good motor and plays with effort. He can be a pass rush specialist for a college team and rush the quarterback on third downs. As of now, he’s 6’4 225 lbs but can easily put on weight in college. His upside is off the charts,” Lee Brecheen said. Get to know Hayden Ocman more in today’s recruiting interview!

Hayden Ocman proves that he is not just a pass rusher as he tackles the John Curtis running back for no gain.

LAFM: Do you have any offers from colleges? If so, how many and who are they from?

LAFM: Paul’s had a great year going 9-2 and getting the district championship but you lost in the quarterfinals to John Curtis in a great game. How disappointing was the early postseason loss after a great regular season?

The early loss was a real disappointment to the team because collectively, we believed that there was a chance to do something bigger with our season.

LAFM: What does the team need to do this year to avoid the early postseason loss?

Stay focused and play the WHOLE game. Taking plays off and not giving 100% just doesn’t cut it when you’re competing against the teams like John Curtis. If our team bonds and sticks together to work for a common goal, then there is no reason that we can’t accomplish great things.

LAFM: What was your best game in a St. Paul’s uniform and why?

My best game came against Edna Karr in last year’s season opener. I came out and recorded 3.5 sacks along with multiple tackles.

LAFM: Lee Brecheen says that you are one of the best pass rush specialists in the state. Do you have a signature pass rush move that you go to?

To me, the key is to keep the offensive line on their toes. If you become a predictable pass rusher then you’ll eventually become unsuccessful.

LAFM: What are areas to you game that you feel that you are the best at?

I believe that my pass rush in particular will be my best strength going into the 2016 season. I also think that my high-motor will allow me to push through and not give up on plays.

LAFM: What are some aspects to your game that you need to work on?

I can improve on my leading ability. I want to be someone that my team can look up to for strength and guidance. I think that I can also improve upon my ability to finish through plays and find the ball.

LAFM: Coach Sears has been successful at St. Paul’s since his arrival. What is it like being coached by Coach Sears?

Coach Sears is a fantastic coach. He really cares about his players, and he always looks to guide them into the direction in which they can become the most successful.

LAFM: Who is the best player that you faced last year and why?

The best player(s) that I faced last year was the Jesuit offensive line. They are very well coached, and I look forward to another great matchup this year.

LAFM: Which player do you model your game after and why?

JJ Watt. He’s a player that was always underrated so he worked until people could no longer ignore him and his game. That showed me that you can do anything if you put your mind to it.

LAFM: Which team on the schedule are you excited to play the most?

Jesuit will be the game that i look forward to the most, given the fact that earned our only loss to them in a close game last year.

No one in my family has played a sport beyond the high school level.

I’m looking to surpass 50 tackles and I plan on reaching a minimum of 10 sacks next season. I also look forward to propelling myself from being an All-District Honorable Mention to being First Team.

LAFM: What are the team goals besides winning a state championship?

Growing closer as brothers. We put a strong emphasis on becoming one team that works for each other and not for themselves.

LAFM: What separates you from any other defensive end in the state?

What separates me from other Defensive Ends is my drive and determination to work until I become the most dominant player on the field.