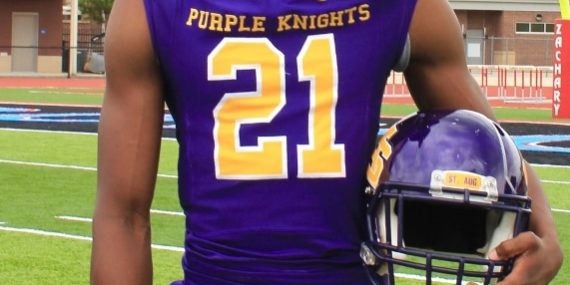 In a league that is  full of star defensive backs in the Catholic league when you look back at New Orleans greats like Craig Steltz (former defensive back for Archbishop Rummel and LSU), Tyrann Mathieu (defensive back for St. Augustine, LSU, and the Arizona Cardinals), Richie Petitpon (former defensive back for Jesuit, Tulane and the Washington Redskins), newcomers like Kristian Fulton (Rummel and currently with LSU), and many more have first made their name in the Catholic league. This year, the Catholic league possesses a new star at cornerback and his name is Jeremiah West. West plays for the St. Augustine Purple Knights and according to Lee Brecheen, he is the best defensive back to come out of the area this year. “Jeremiah West is the most gifted cornerback in New Orleans,” Brecheen said. “He has got a little bit of Tyrann Mathieu in him when it comes to playing the game. His hips are SEC ready and has a great vertical. West is also a big guy and plays like it.” Anytime that you are compared to a St. Augustine legend in Tyrann Mathieu, you know that you are something special and that is what Jeremiah West is. As of now, Jeremiah West has plenty of offers but from mid D-I schools but if he waits it out for one more year,  he could get a lot of major D-I offers. Check out today’s article on one of the best players in the best district in Louisiana high school football cornerback Jeremiah West as he talks about the schools that offer him, the comparison with Tyrann Mathieu, the player that makes him better in practice, the receiver that he is looking forward to playing against the most, and so much more in today’s recruiting interview!

Jeremiah West in action as he puts himself in position to make the play.

LAFM: Do you have any offers from any colleges right now? If so, where are they from?

LAFM: Last year was a tough year for the team going 2-8 but mostly everybody from last year returns. What are the team’s expectations this year?

As one of the seniors on the team, our goal is to be more discipline, know how to finish, and also create more turnovers so our offense can get the ball. We need to communicate more and play for each other.

LAFM: You go up against one of the best quarterbacks in the state in Justice McCoy. What is it like going against him and the offense in practice?

Justice McCoy is a great quarterback to go against. He is always alert and always brings something new to the table every practice. When going against our offense, they have so many weapons, but my goal for the offense is to finish.

My individual goal this year is to be more discipline and do what it takes to win the game.

LAFM: Tyrann Mathieu went to St. Augustine and now he is the highest paid defensive back in the NFL. Is he somebody that you look up to when you play your position and is there anybody else that you watch that helps you play your game?

Yes, I am very proud of him, but I look up to any athlete who is doing what it takes to win.

LAFM: How tough is it to play tough team after tough team in the Catholic league with Brother Martin, John Curtis, Jesuit, Rummel, Shaw, etc. Which one of those teams do you enjoy playing the most and why?

Our district is the hardest out of the rest of them. It can be very tough. You just have to play through it and do your best. The team I enjoy playing is Brother Martin. I caught my very first interception on them, and I enjoy going against their best receiver.

My strengths are my aggressiveness and my long frame.

I need to improve on my awareness and become more focus also do a better job communicating.

LAFM: Is there a wide receiver in the state that you want to play against more than everybody else? Who is it and why?

Jeremy Singleton because I know there is more to be proved, and if he plays against me, he is going have to work for everything he gets.

LAFM: What was your best game in a St. Augustine uniform?

My best game in a St. Augustine uniform was when we played Jesuit.

LAFM: What is the dream college that you want to play for and why?

I don’t not have a dream college. I just want to go the the college that want me.

LAFM: In your opinion, what does a defensive back need to have in order to be successful?

The tools that a defensive back must need is that they must be discipline, know your responsibility, know everyone else’s job,  communicate and also create turnovers.

My father played for O.P. Walker.

LAFM: What makes you standout from all the other defensive backs in the state and why?

What makes me standout is that I’m very physical on the line.  I’m also long, like to run, like to tackle, and I have good footwork.