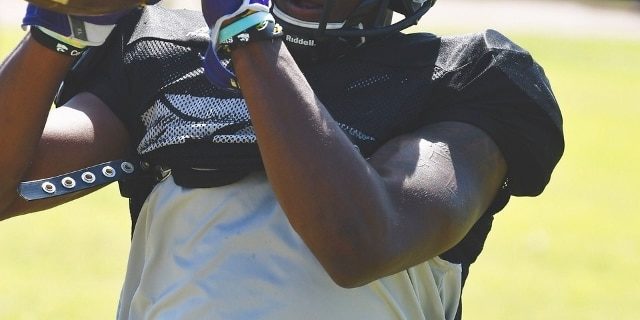 Central High School Cornerback Jearlmiah Ward is one of the most undervalued cornerbacks in the state. As of right now, he has no offers but he should be getting a lot more. Jearlmiah is a solid cornerback who has great cover skills and can lock down an opponent’s number one receiver. He also has playmaking ability with the football in his hands as he has a couple of touchdowns as a kickoff returner and punt returner. He also plays a little bit of wide receiver. Jearlmiah can play all over the field because he’s such a very important part of this Central High football team. Don’t be surprised if a couple of colleges try to get Jearlmiah soon. “He’s a great athlete and has a real knack for the football. Jearlmiah runs really well and is very instinctive. He’s a big time sleeper and a legit 1-AA prospect,” Lee Brecheen said. Get to know Jearlmiah a little bit more in today’s recruiting interview!

Jearlmiah Ward (7) is focused on the quarterback before dropping back into coverage.

LAFM: Do you play more than one position? If so, which is better and why?

Yes, I also play receiver , but I like defensive back more because I like to cover and tackle.

LAFM: What’s your gpa and act?

LAFM: What camps have you attended this year?

I’ve attended 1 camp so far but plan to attend more in the upcoming month.

LAFM: How many offers did you receive? If so, by whom?

No offers so far

My goals are to become a better leader , make All-State/District, and lead the state in interceptions.

LAFM: What did Central do last year?

Last year, we went 5-5 and made it to the first round of the playoffs.

LAFM: What are Central’s goals as a team this year?

Our team goal this year is to bring the district championship back to C-town and go far in the playoffs.

LAFM: Which team is your favorite to play? Why?

My favorite team to play is Zachary because I went to school there in middle school so thats always a little extra motivation for me when we play Zachary.

LAFM: Which player at your position do you look up to the most and why?

As a DB, I look up to Patrick Peterson because he’s a man of God and a great football player. He works extremely hard and he’s a great leader for his team.

LAFM: What’s it like being coached by a Louisiana High School football legend in Sid Edwards?

Its great to be able to be coached by Coach Sid. Like you said he is a legend and when he talks everyone listens. He’s smart and not everything is about football with him. He has taught us lessons about life, helping out the community,and faith.

LAFM: What was your favorite football memory at Central High School?

My favorite high school football memory as a football player here is when I got my first interception. It was the last game of a great sophomore year for me. I caught the pick and returned it for a touchdown which gave us the lead in a big rivalry game. I’ll never forget that play.

LAFM: What are your strengths at cornerback?

My strengths at cornerback are my fluid hips, my patience at the line of scrimmage, and my quick feet and route recognition.

LAFM: What are things that you need to improve on this year?

Things that I need to work on this year are eye discipline, finishing through plays, and becoming a better leader.

The recruiting process has treated me well I would say. Some advice I would give to some younger teammates of mine would be to stay patient and work hard. Everything else will play out find.

LAFM: Is there anybody in your family that has played high school, college, or pro football? If so, who are they and where did they play?

My brother Ken Ward, an outstanding 110  hurdler and football player for Catholic High School recently,  had the 5th fastest time in the nation in high school and ran for Southeastern University.

LAFM: What separates you from all the other cornerbacks in the state?

What separates me from other corners in the state is my determination and work ethic. I’m determined to be the best and refuse to be outwork in anything.