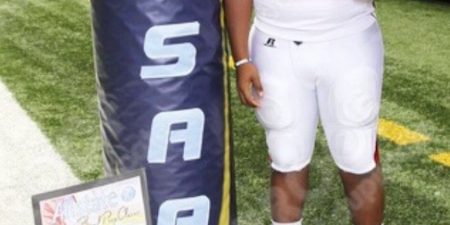 On offense, the most important position is the quarterback but arguably the second most important is the center because he is the one who snaps the football and gives the ball to the quarterback in the first place. The center must also be the quarterback of the offensive line and communicate the blocking assignments to the rest of the offensive line. If you look at Alabama the last couple of years, they always had a great center whether it was Barrett Jones or Ryan Kelly. If an offense has a great center, then, that gives an offense a better chance to be successful on the field. Riverside Academy center Glenn Bernard was a huge reason why Riverside Academy had such a huge season last year. The team went all the way to the state championship game. He lead his team to the state championship and was a huge reason why the team went there in the first place, but Bernard is still trying to get attention from colleges. Bernard has the talent to play at the next level. He has good size, very quick, strong, great feet, and is very smart. Those are great qualities to have in your typical center. Last year, Bernard played well as a junior and made 2nd team All-District but he is hungry for more and is still unhappy  about the way last season ended. Our own Lee Brecheen thinks that Glenn Bernard is the biggest sleeper ,this year, that plays the center position. “Glenn Bernard is a sleeper center,” Brecheen said. “He has good feet and is very strong.” The best centers are the ones that just do their job every day and are the ones that win games. If you win games, you must win the line of scrimmage and since the center is the quarterback of the offensive line, then the center is doing its job. Due to the number of wins, the team had last year. It’s clear to say that Glenn Bernard is doing his job and that’s all you want in a center. Read more about Glenn Bernard as he talks about family, his teammates, last season’s disappointing ending, how the team will bounce back, and so much more in today’s recruiting interview!

Glenn Bernard in his stance before a play in the state championship game last year.

My name is Glenn Bernard Jr.  I am 17 years old and I play the center position.

LAFM: Did you have any awards or achievements from last year?

LAFM: Did you attend any college camps over the summer? If so, where?

I attended the LA Tech, LSU, Northwestern State, and the Off/Def line camp at Nicholls this summer.

LAFM: Have you received any offers from any colleges? If so, where?

No, I have not received any offers yet.

LAFM: Have guys like Evan Veron (Riverside linebacker, now with Nichols) and others given you advice on picking the right college and how to deal with the recruiting process?

Yes, the older guys like Evan and Herb McGee (Riverside receiver, now with South Alabama) told me to go where is best for you and your family and most importantly your education. Those guys were great people and they have told me a lot of valuable things.

LAFM: Is there any advice that you would give to any younger players about the process?

The advice I would tell younger guys on my team is to be patient. Take care of the books first and then football. If you do that, everything else will fall in place.

LAFM: Who is another starting offensive lineman that you feel like is going to have a breakout season?

Cameron Cook is another offensive lineman that we have. He can line up anywhere and play any position for us and that is a crucial part for our team.

LAFM: What are areas that you are best at when playing center?

Areas I’m best are just about anywhere because you have to have that mindset.

I need to improve on my hand placement a little more and staying attached to linebackers a bit longer.

LAFM: Would you rather pass block or run block? Why?

I would rather run block because I like to go attack the defenders instead of laying them attack me such as pass blocking so I like run better.

LAFM: What is your favorite play as an offensive lineman.

My favorite play is our inside zone when they run the ball behind me. It gives me more of a motivation to get my guy out the way and free the running back for a big gain.

LAFM: The team lost the very first game of the season to John Ehret but ever since, you guys won 11 straight games against quality competition. What kickstarted the win streak for y’all?

When we lost versus Ehert last year, it left us feeling down but we as a team said that we will never have this feeling again so we came back harder and harder versus every opponent so that is what kick started the win streak.

LAFM: How disappointing was it to have the season the team had and lose in the state championship game?

It was very disappointing but that championship lost was a feeling that we never want to go back to and we as a team know what it takes to get there and we all will put in the work to get the better results this time around.

LAFM: What does the team need to do in order to have the same type of season but with a better ending?

We just need to stay consistent and just do what the coaches tell us if we execute the game plan. They tell us to go out and give 100% every play. We believe that we can have the same season as last year but better.

My individual goals for this season just to help the team win it will be nice to be first team all district game for his team on the metro and first-team all-state but none of that matters as long as we win the championship at the end of the year is what matters.

LAFM: Who was the best defensive lineman you played against last year? Why?

My dad played high school football back in 1973 through 1975.  He was the quarterback for Clark High School in New Orleans. He is the only person in my life because my mother passed away when I was too so is just me and my dad in having him tell me about his old stories is great I like to listen to them.

LAFM: What separates yourself from any other center in the state?

What separate myself from other centers in the state is just my physicality and my high motor. Our coaches always tell us to go until the ref blows the whistle and I think that our whole line does that also.