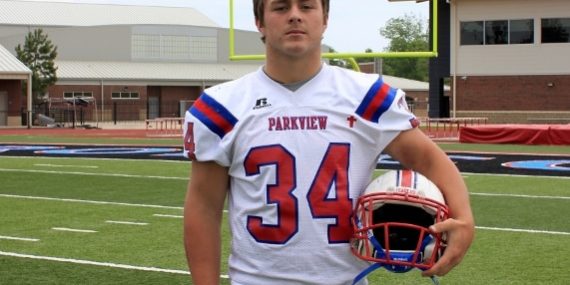 All Around player Trenton Kavanaugh from Parkview Baptist pretty much does everything for the team maybe even including being the water boy. In all seriousness, Kavanaugh can lineup at any position that Coach Jay Mayet and the rest of the coaching staff wants him to play. He can play runningback, linebacker, or even safety. As a runningback, Kavanaugh is very versatile. He can run between the tackles as well as the outside. He also has the strength and the size to run over you at 5-11, 220 pounds and can outrun defenders with his speed as well. For the team, Kavanaugh is one of the team leaders and key contributors coming back for the Eagles as they try to repeat for the first time in school history as well as trying to capture their sixth straight state championship. Kavanaugh is a great football player who works hard and is a great leader. His athleticism and heart on the football field as an athlete really stood out to us as he made our 1st Team All-Louisiana Team which is in our magazine. Louisiana Football Magazine Editor and T.V. Host Lee Brecheen really believes that Kavanaugh is a special player and is being undervalued by colleges.

“Trent Kavanaugh is a special player,” Brecheen said. “He plays all over the field (RB/LB/S/Special Teams) and is not the biggest or fastest on the field but competes , is super tough, and has a high football I.Q.”

Kavanaugh has shown great individual efforts like his 166 yard and 2 touchdown performance against state powerhouse John Curtis last week but the team has not been getting the early season results that they planned for at the start of the season. The Eagles have played tough and lost their first three games by a combined total of 19 points. The bad news is that the team is 0-3 but the good news is that Parkview has probably played the toughest first three games out of anybody with the state. Playing games against Catholic (B.R.), Riverside Academy, and John Curtis is no easy task especially when all three of those teams made at least the semi finals in their respective classes the previous year. Sometimes, champions are made when the going is tough and that is Kavanaugh’s mindset as of right now and that is trying to get the championship program back in the hunt for competing for championships. Check out our recruiting interview with the star football player from Parkview Baptist as he says his thoughts on the tough early season start, last year’s state championship game, being named on our 1st team All-State player, the former Parkview Baptist football star that makes him even better as a football player!

Trent Kavanaugh was a versatile offensive player for the Eagles last year and is looking forward to carrying the load this year. (Photo provided by Trent Kavanaugh)

LAFM: What’s your name, age, positions you play, and school you play for?

LAFM: This year, you were named to our 1st team All-Louisiana team as an athlete. What does it mean to you to be recognized as one of the best players in the state?

It is a great honor to be named your first team all state team as an athlete. It makes me want to work harder and to prove to others that I am what y’all named me. I want people to remember me the way I played.

Well, I also played on the team the year before that, the team that went to state and lost. It was very satisfying to win a state championship and have all the players from the past, “The Legends”, congratulate you on your accomplishment. It was short lived though we know we can’t live in the past and we have to work just as hard if not harder than last year to be able to repeat.

LAFM: The team is off to a slow start at 0-3 but your team has played arguably the toughest three games in the state against Catholic (BR), Riverside Academy, and John Curtis. What is the team’s mindset after those three games right now?

Playing those games have only made us better. We know what we did wrong in those games and we have fixed them. I believe we will be a big contender this year in 3A and our district.

Trenton Kavanaugh is also a playmaker on the defensive side of the footbal as well. (Photo provided by Trent Kavanaugh)

LAFM: Does the struggle have to do with the tough opponents, the pressure of trying to repeat as state champions or has the team not playing like they are capable of playing?

The tough opponents and us not playing to our capability has been the problem for us this season.

LAFM: What would you say to the team if you had a players only meeting?

Well, we do have player only meetings and the seniors and captains just let the team know that this season is nowhere near over and 0-3 means nothing. Like Coach Mayet always says, “It’s not who we play ,but it’s how we play”.

LAFM: You have played under two great head coaches in Kenny Guillot and Jay Mayet. What is the difference between both guys as head coaches?

Both are tremendous coaches, the best I’ve played for. I guess the difference is how they coach. Coach Mayet connects with us and realizes why we do some things. I guess you could say he is a little more laid back.

LAFM: You have a great balance between speed and power. Where do you get your athleticism from?

My mom is very athletic; she still plays organized sports but both my parents have pushed me to be the best I can be. I also remember from a very young age my step-dad going outside with me teaching me running drills and ball security.

I have no offers but the military schools and a few Ivy league schools have shown some interest.

LAFM: What position do you prefer playing in college and why?

If I had to pick, it would be strong safety but I would play whatever position I am needed at. I like hitting people so defense is better for me.

LAFM: What was your favorite football memory for Parkview Baptist?

My favorite memory was winning state and jumping into the student sections with Sam O’Brien. I will admit it was planned the play before. He told me that when the clock hits zero, we are going in the student section. It was pretty awesome.

My individual goals are to repeat as All-State but also to have more tackles and succeed more on offense.

I would say my strengths are running power and open field tackling.

I need to improve on my speed and footwork.

LAFM: Is there anybody that you want to give a shoutout to for helping you be in the position that you are in today?

There are a few people. Houston Robert, who now plays at Rice University, but used to play with me at Parkview, is a big motivation for me. We used to always workout after football and during the offseason and to see where he is now has motivated me. Also my Coach Drew Dileo (former Parkview wide receiver and former Michigan wide receiver) has been motivation for me. He isn’t the biggest, strongest or fastest but when we played, he played with everything he had and he never let others tell him that he wasn’t good enough.

LAFM: What would you say to all the college scouts and coaches that are wanting to know more about you as a football player?