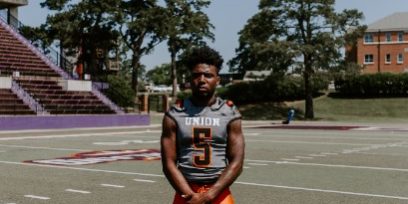 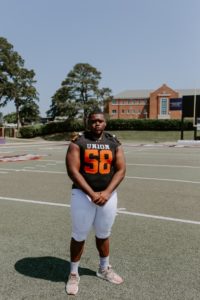 Jaylon Gales: The Union Parish Farmers have arguably the most talented tight end in North Louisiana in Jaylon Gales. At 6-3, 220 pounds, Gales is athletically gifted with 4.55/40 speed to already go with his DI frame. In this day of high flying passing offenses, Gales is another hybrid tight end that can be placed off the line of scrimmage in the slot as another receiving threat. With reliable hands, speed, and athleticism, the 1st Team All-District selection is a match up nightmare. Despite his talent, Gales has not really been attracted by many colleges, but his dreams are still set on playing for a DI school. His favorite three schools are LSU, Clemson, and Florida. Playing for one of those three schools is something that always drives Gales as even during the offseason, he continues to get in shape and improve as a player.

Dalton Hogue: Another player that is flying under the radar is another Union Parish High School recruit in senior offensive guard Dalton Hogue. Like his teammate Jaylon Gales, Hogue is one of the best players at his position in all of North Louisiana, but for some reason, has received no offers from any schools. At 6-3, 320 pounds, Hogue has the size to play DI football. However, according to Lee Lee Brecheen, the 2018 2nd Team All-District selection has much more than that as he has an old school mentality as well as a similar body frame to Trai Turner (St. Augustine/LSU/Carolina Panthers). He along with his teammate are just two talented players on a very good Union Parish High School team that finished 10-3 and lost to eventual Class 3A state runner-up Sterlington High School 13-12 in the Class 3A quarterfinals. Head Coach Joe Spatafora does not get the credit he deserves for making this team a consistent state championship contender year after year. After a season in which they came just a couple of games short of their goal, this is not only a talented, but a motivated group that is more than capable of returning back to the Super Dome for the first time since 2013.

Check out the interview on both Union Parish High School recruits below!