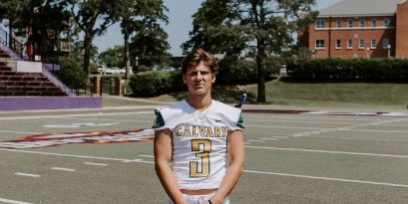 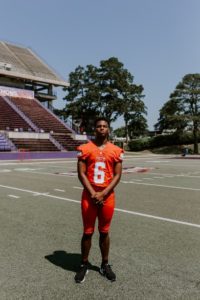 Cade Hart: The last time that Calvary Baptist Academy had two DI defensive backs and a talented quarterback, the Cavaliers took home the state championship trophy. That championship team featured Andraez “Greedy” Williams (LSU/Cleveland Browns) and Rodarius Williams (Oklahoma State) on defense along with Shea Patterson (Ole Miss/Michigan) calling the signals. Well, it is a little bit of deja vu this year as the Cavaliers once again have two DI defensive backs in Ole Miss commit Eric Reed Jr. and Kansas commit Tanner Hooker. They also have a talented veteran starting quarterback that has the ability to play at the DI level like his predecessor Shea Patterson. Hart is currently in his fourth year as the starting quarterback for the Cavaliers. As a junior, the 6-1, 190 pound signal caller threw for 2,233 yards and 27 touchdowns. Heading into this year alone, he has accounted close to 8,000 yards and close to 80 touchdowns. The stats back it up as Hart will leave as one of the program’s passing leaders, but even with those numbers, there is one number that matters to him most and that is the number posted at the scoreboard in the end. Even though Hart has made plays on the gridiron, he will actually take his talents to the baseball diamond as he will pitch for LSU Eunice next season. So far so good is his senior season as the Cavaliers are 5-0 and he has thrown for over 1,000 yards and close to 20 touchdowns through five games.

Camdyn Crowe: One of the best kept secrets in Louisiana is Ruston High School wide receiver Camdyn Crowe. At 6-4, 215 pounds with 4.5/40 speed, Crowe is a physical specimen. The most intriguing part about him is the he has yet to receive any collegiate offers. Louisiana Football Magazine’s Lee Brecheen has been very high on Crowe since he started watching him play as a freshman. In fact, he has even put him on Tiger Rag’s Dirty Dozen at the start of the football season as one of the state’s top senior players. With his size, frame, athleticism, and speed, Crowe has the versatility to not just play wide receiver, but also tight end, or even outside linebacker. Crowe is coming off of a productive junior season in which he had 45 catches for 779 yards and seven touchdowns. Most of all, Crowe is a team first player that just wants to lead the Bearcats back to the state championship.

Click the link below to check the video out!