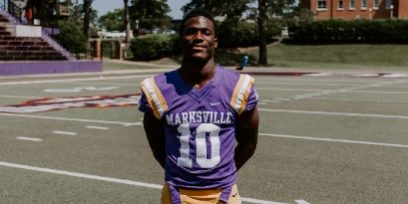 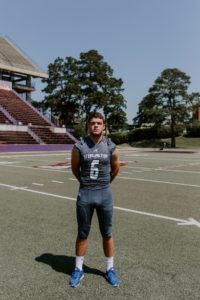 Daniel Miller: The Marksville Tigers have always had under the radar players, especially this year as the Tigers have one of the best athletes in the Alexandria metro area in Daniel Miller. At 5-11, 185 pounds with 4.5/40 speed, Miller has the ability to change the game all by himself. Marksville Head Coach J.T. Dunbar uses Miller’s gifted athletic ability to the team’s advantage. As any coach knows, you give your best play maker opportunities with the ball in their hands. That is how the Tigers use Miller as he has played quarterback, running back, wide receiver, cornerback, and can also return kicks as well as punts. The stats show how much Miller’s talents are being utilized as last season, he accounted for 1,269 total yards (683 rushing and 586 passing) on offense while also racking up 68 tackles and 2 INTs on defense. There is no question that this season, the team will go as far as #10 takes them. If the Tigers make a deep playoff push, then the rest of the state will know the “It” factor that is Daniel Miller.

Hayes Crockett: The Sterlington Panthers have been regularly state championship contenders, and after a year of coming just short of winning a Class 3A state championship, they are even hungrier than ever to hold up their first state championship since 2016. Well, their chances are high as ever in 2019 in order to accomplish their goal thanks to the return of one of the most talented quarterbacks in the Monroe area in Sterlington senior QB Hayes Crockett. At 6-4, 210 pounds, Crockett has the frame, arm, and 4.7/40 speed to become a very good quarterback. After transferring to Sterlington from Prairie View Academy, Crockett got his feet wet in year one as the starter leading the Panthers to a Class 3A state championship with 875 passing yards and 11 touchdowns to go along with seven more touchdowns on the ground. Now, with a full year as a starter under his belt, Crockett is looking to make the next step and lead the Panthers to one step further and that is actually holding the trophy up in the Superdome at the end of the season.

In today’s recruit video interview, Brecheen caught up with the two talented prep signal callers to talk about their strengths, weaknesses, team’s goals, and so much more! Click below to check out the full interview!