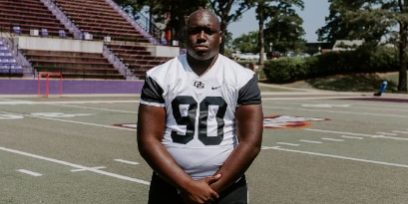 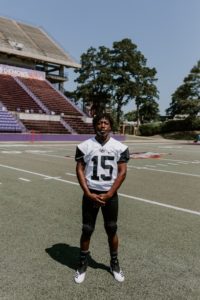 Kenean Caldwell: In a season full of big time defensive linemen such as Jaquelin Roy (U-High), Jalen Lee (Live Oak), Jacobian Guillory (Alexandria), Patrick Jenkins (John Ehret), etc., it is easy to forget that the Oak Grove Tigers have themselves a beast on the interior of the defensive line of their own in senior Kenean Caldwell. At 6-3, 320 pounds with great feet, Caldwell can take over games on the defensive side of the football often times drawing multiple blockers while freeing up other teammates to clean up on tackles. Even being doubled and tripled teamed, often times, it did not even matter as Caldwell would still blow up plays in the backfield. It was evident last season with Caldwell posting 47 tackles, an incredible 30 tackles for loss, eight sacks, and two passes defended. Caldwell’s physical intimidation and his ability have attracted the attention of major DI colleges that have offered the big time defensive lineman. Colleges such as Texas A&M, Ole Miss, ULL, ULM, Colorado, Nicholls State, TCU, SMU, Louisiana Tech, Southern Miss, Troy, and Tulane have all offered the three star prospect, but out of all the colleges that offered, it was actually the Kansas Jayhawks that stood out the most for Caldwell as he committed to Head Coach Les Miles and his staff on June 22nd. Now, since Caldwell has already announced his commitment, he can then focus on the season along with other big men Burt Hale, Nick Sciara, and Cole Penneck.

Otis Moore: In speaking about the upcoming season, there may not be a team more motivated in getting back to the Super Dome at the 1A level than the Oak Grove Tigers. Last season, the Tigers finished the season with a 13-1 record and made it all the way to the Class 1A state championship game where they lost to the Kentwood Kangaroos. Even though the Tigers lost in the Dome, it did also serve as a coming out party for one of the most explosive two way players in the state of Louisiana. That player is Oak Grove RB/DB Otis Moore. Before the Class 1A state championship, Louisiana Football Magazine’s recruiting guru Lee Brecheen said that a player to watch out for would be Moore, and Moore did not disappoint earning MVP honors for Oak Grove with 16 carries for 92 yards and touchdown on offense along with posting a half sack and an interception on defense. However, it was not just an one game wonder for Moore as the 5-9, 165 pound speedster was a consistent playmaker on both sides of the football all season long. In 2018, as a running back, Moore had 106 carries for 1,383 yards and 19 touchdowns. He also accounted for three more touchdowns to add to his total of 22 last season while averaging over 13 yards per carry. On defense, he had 49 tackles and two interceptions. Now, with another year this time as an experienced X-factor, Moore has a chance to throw his name out there even more hopefully this time ending with not only an individual award, but a state championship trophy as well.

Check out the interview on both Oak Grove senior recruits below!