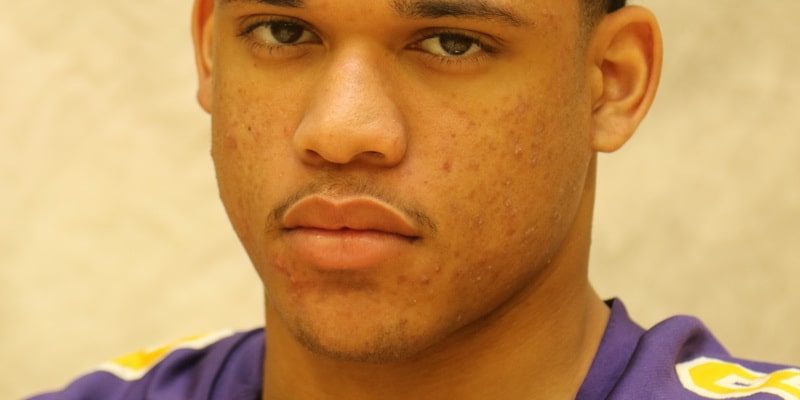 In today’s recruit interview, we go to Catholic High School where Lee Brecheen caught up with St. Augustine High School senior linebacker and Kansas signee Taiwan Berryhill before the start of the season!

Taiwan Berryhill: The state of Louisiana has produced a lot of great collegiate and NFL players, but no high school in the state has produced as much talent as St. Augustine High School in New Orleans. Another name that will be added to the school’s incredible and tradition is senior outside linebacker Taiwan Berryhill, who has announced that he will sign with the Kansas Jayhawks back in December. The talented three star prospect was one of the state’s underrated DI signees choosing the Jayhawks over the likes of Arkansas, Colorado State, Indiana, Tennessee, and Memphis, among others. Louisiana Football Magazine’s recruiting expert Lee Brecheen thought that Berryhill did not talked about as much as other defensive prospects in the state. In fact, he put the St. Augustine defender on the front cover of this past year’s South Magazine as well as on the 2nd Team All-South Louisiana Team.

“Taiwan Berryhill is one of many phenomenal players on St. Augustine’s team,” Brecheen said. “It is hard to evaluate them on film because everybody can really play. He can close on ball carriers as good as anybody. It’s scary because it seems everybody on that defense looks and plays like him.”

At 6-2, 210 pounds with 4.5/40 speed, Berryhill can become another defensive star under Les Miles, who has seen plenty of great linebackers during his coaching days at LSU.