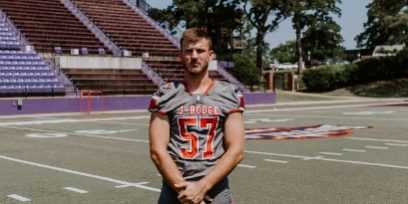 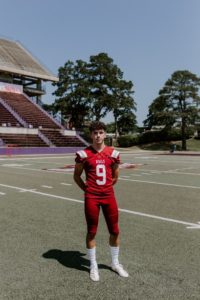 Logan Webb: The Jonesboro Hodge Tigers have not had their best season as the team is currently 2-6, but one player that has played hard despite of it all is their senior offensive/defensive lineman and long snapper Logan Webb. At 6-3, 255 pounds, Webb is a tough player to prepare for up front especially at the 2A level. Last season, Webb showed what he was capable of on defense with 38 tackles, two sacks, and two tackles for loss. Like mentioned earlier, Webb does a little bit of everything for the Tigers due to the lack of depth the team has. Whether it is playing on the offensive line, defensive line, tight end, or even long snapping, the senior has shown his versatility quite often over the course of his career. Louisiana Football Magazine’s recruiting guru Lee Brecheen has been very high on Webb as he put him on the cover of the North magazine as well as on the 1st team All-North Louisiana preseason team as a defensive end. Webb is not only a versatile football player, but he is a versatile athlete in general also playing baseball, basketball, and even participating in track and field. His top schools are ULM, Northwestern State, and ULM. Even though the Tigers have only won two games, they have played well enough to still be in the top 32 for the Class 2A playoff bracket currently at 30th. For Webb and the Tigers, they will try and clinch a playoff spot when they play the North Caddo Rebels and the Lakeside Warriors in the final two games of the season.

Cameron Page: Like Jonesboro Hodge, the Pineville Rebels have had a disappointing season in terms of the win-loss record at 2-6, but like the Tigers, the Rebels are in a position to get back in the thick of things in the playoffs if they play well in their final two games. A player that will help the Rebels try to make a push at getting in the Class 5A playoffs is another versatile player in senior Cameron Page. Not only is Page a talented wide receiver on offense at 6-2, 170 pounds, but he is perhaps even more talented as a punter as he has averaged 40 yards per punt. Page is also a track standout for Pineville participating in the 4 x 200, 4 x 400, and the 800 meter dash. Like Webb, Louisiana Football Magazine’s recruiting guru Lee Brecheen put Page on the cover of the North magazine as well as on the second team All-North Louisiana preseason team. As of now, Page’s top schools are Louisiana Tech, Arkansas State, LSU, Ole Miss, and ULM. After the football season is over, Page likes to be involved in his church youth group. Hopefully for Page and the Rebels, they can find a way to continue their season in the playoffs.

In today’s recruit video interview with Lee Brecheen, we caught up with Jonesboro Hodge High School senior DE Logan Webb and Pineville High School senior wide receiver/punter Cameron Page before the season to talk about their skills, why a college should take a chance on them, their goals for the season, and much more! Click the link below to check the interview out!