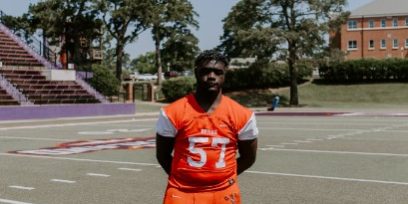 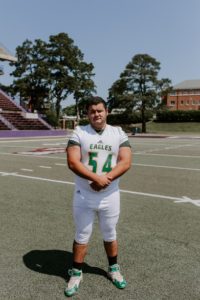 In today’s recruit interview, we go to Northwestern State University where Lee Brecheen sat down with two of the best linemen in North Louisiana in DE Joseph Hardy from Delhi High School and OG/DT Cody Saucier from Holy Savior Menard!

Joseph Hardy: Before being announced as Head Coach at Washington Marion High School earlier this year, Toriano Williams helped build a winning culture at Delhi High School. It has been a tremendous turnaround as the Bears went from winning only three games in 2017 to winning ten games in 2018 and advancing to the Class 1A quarterfinals. The explosive offense was one reason for the quick turnaround, but another reason was an improved defense led by its best player, which is senior DE Joseph Hardy. At 6-3, close to 270 pounds, Hardy is a sleeper that is quick enough to play defensive end, but also big and strong enough to play inside. Last season, Hardy came into his own posting 10 sacks and pressuring the quarterback on numerous occasions. This season, Hardy wants to prove that last year was not a fluke and that he can improve on those numbers this season.

Cody Saucier:  For the last four years, Cody Saucier has been a mainstay on both the offensive and defensive line for the Holy Savior Menard Eagles. At 6-2, 320 pounds, Saucier can plug up holes as a nose guard/defensive tackle or open up holes as an interior offensive guard. However, Saucier has shown that he is not just a big body as he can run a 5.0/40. As a sophomore, Saucier showed that he is not only a run stuffer, but also an active tackler by making 90 tackles. After a standout junior season, Saucier hopes to end his Menard career not only with a career year, but also helping his team breakthrough and win a playoff game this season.

In today’s recruit interview, Brecheen talks to both of these defensive linemen and discuss how their skills translate to the next level as well as what they want to accomplish for the upcoming season! Check out the interview below!