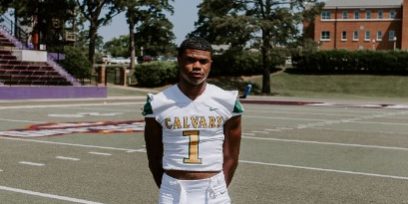 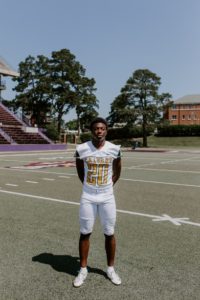 Eric Reed & Tanner Hooker: The good news is that the Calvary Baptist Academy Cavaliers will have their best secondary in 2019 since the days when Andraez “Greedy” Williams (LSU/Calvary Baptist) and Rodarius Williams (Oklahoma State) were shutting wide receivers down while winning state championships. This season, the secondary tandem featuring SS Eric Reed and CB Tanner Hooker has a chance to leave their mark just like the Williams brothers did. Similar to their last state championship team with Shea Patterson (Ole Miss/Michigan), the Cavaliers also have a really good quarterback in Cade Hart so the ingredients are there for the Cavaliers to make another run to the Super Dome. While we will feature Hart later on, our focus today is on the star defensive backs.

Like another in-state defensive product named Eric Reid (Dutchtown High School/LSU/San Francisco 49ers/Carolina Panthers), Calvary Baptist Academy senior defensive back Eric Reed has the talents and abilities to take his talent not only at the next level, but even possibly one day in the NFL. Don’t just take our word for it, but just look at the number of colleges that have offered the four star safety. DI programs such as West Virginia, TCU, Southern Miss, Notre Dame, LSU, Louisiana Tech, Kentucky, Duke, Colorado, Virginia, Ole Miss, and Auburn have all offered Reed, but out of the list of schools, there was one school that stood out from the rest of the pack. So much so, Reed decided to commit before the season with the Ole Miss Rebels on June 18th. Talking to the talented defensive back just recently, it was the school’s atmosphere and the coaching staff that had the most impact on his decision to commit before the season. Now, he is committed, the 6-1, 200 pound senior can just focus on his senior season. After a year in which he had 40 tackles, ten tackles for loss, and ten passes defended, Reed is hoping that he has a bigger season so he can carry not only carry the strong defensive back rotation at the school, but also end his high school career with a state championship trophy.

Reed’s partner in crime Tanner Hooker may not be getting as much attention, but the 6-1, 185 pound three star prospect has shown that he can be just as good. Last season, Hooker had 30 tackles, three interceptions, a forced fumble, and five passes defended. Like Reed, Hooker has gained a lot of college offers including Tulane, Kansas, Kansas State, SMU, Indiana, Colorado, Southern Miss, Louisiana Tech, Arkansas State, and Toledo. After talking to Hooker just recently, he has really shown interests in SMU. “I really like SMU because it’s close to home and the education is top notch. Also, the coaching staff is great,” Hooker said. Still, as of right now, Hooker has still kept his recruitment open and is still uncommitted. However, like his teammate, he is definitely committed to playing his senior season and bringing a state championship trophy back to Linwood Avenue.

In today’s recruit interview, we go to Northwestern State University where Louisiana Football Magazine’s recruiting guru Lee Brecheen sat down with two of Calvary Baptist Academy’s top recruits in SS Eric Reed and CB Tanner Hooker! Click the link below to check out the interview featuring two of the best defensive backs in the Class of 2020.