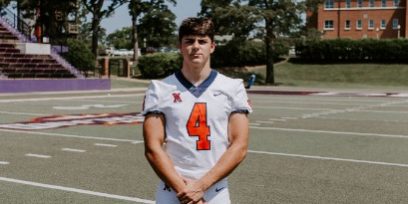 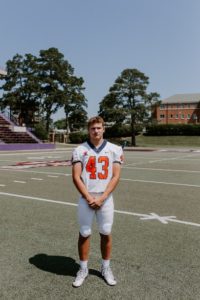 Brooks Miller: Last season, the West Monroe Rebels’ defense went on one of the most dominant postseason performances in Louisiana high school football history by giving up no points in four postseason matchups on their way to the Super Dome. A key reason why the Rebels did not give up any touchdowns was because opposing teams had to get past the last line of defense, which so happens to be star safety Brooks Miller. Last season, Miller showed why opposing offenses had tough trouble game planning against him and this defense. In one season alone, Miller had an impressive 12 interceptions. A lot of defensive backs would be glad to have 12 in a career and the three star defensive back just so happened to post that number over a course of a whole season. Louisiana Football Magazine recruiting expert Lee Brecheen is very high on the talented defender.

“Brooks Miller is a leader that knows the game, reads, and hits like a linebacker with 4.55/40 speed,” Brecheen said.

With his high football I.Q., versatility, and ball hawking skills, the 6-2, 195 pound safety has received offers from Grambling State and ULM, but it was an offer from Baylor that has really drawn his attention the most. On June 24th, Miller decided to commit to the Bears and thus putting his focus on his senior season.

Tanner Zordan: Like his counterpart, Tanner Zordan is an All-State defender in his own right. Even though having a talented player in the back end of a defense like Brooks Miller is a luxury, a lot of times it is not even needed especially with Tanner Zordan leading the middle of the defense. Zordan is just another player in a long list of great linebackers to come through West Monroe, and the numbers back it up as last season he had 90 tackles, four sacks, and ten quarterback hurries. Lee Brecheen is high on both Zordan and Miller as he put both players on the cover of the All-North Louisiana magazine as well as on the 1st Team All-North Louisiana team. Brecheen believes that at 6-2, 220 pounds, Zordan has a great chance to be the next great DI linebacker signee to come from this historic football program. As of right now, the senior West Monroe linebacker has two top schools in Northwestern State and ULM.

Despite the team’s regular season and postseason success over the last couple of seasons, the West Monroe Rebels have not won a state championship since 2011. The Rebels have come close in 2016 and 2018 going all the way to the Super Dome, but the team came up just short both times. So far this season, the Rebels have started strong out the gate with a current 6-1 record heading into this week against Ouachita Parish!

In this recruit video interview with Lee Brecheen, we caught up with the two West Monroe senior defensive standouts before the start of the season to talk about their strengths, what they need to improve on the most, and how the Rebels can finally break through for their ninth state championship this season! Click the link below to check out the interview!