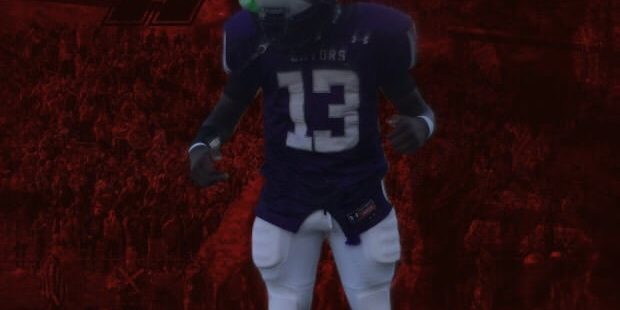 Over a week ago, we covered a great defensive player for the LaGrange Gators in senior DE Kevin Victorian, who will be taking his great playmaking ability to Grambling. Today, we profile another key senior LaGrange defensive player in WR/FS Devin Jack. Jack has had a prolific career playing for LaGrange. Over his career, he was named 1st Team All-District twice and was a LSWA 4A All-State defensive honorable mention. What made Devin Jack so special as a football player over his career was his playmaking ability as a receiver as well as his ball hawking skills as a defensive back. He had an impressive eight interceptions to go with 45 tackles and three interceptions in his senior year. When he was on offense, he was a threat to score on every play. In his junior year, Jack had ten touchdown catches. What makes Jack scary is his ability to force turnovers on defense and then make those turnovers into points. In fact, Jack was the player of the game in a game that sealed the district championship for the Gators. In that game, he had two interceptions on defense including one returned for a touchdown along with a receiving touchdown on offense. Along with Jack, other defensive senior standouts such as Victorian and Vincent Wilson made the Gator defense very stingy. The defense was the strongest side of the football as the group allowed 30 points or more in only three games last season. The team went 5-6, but it was a step in the right direction for Head Coach Jules Sullen as the team has made the playoffs every year since 2009. They will try to accomplish the same type of success when the team moves up to 5A next season.  Devin Jack was just one of those players who has helped the Gators get to that level. The talented senior playmaker will take his talents to Henderson State, which is located in Arkadelphia, Arkansas. We caught up with the Henderson State signee as he talked about his high school football career, the reason he decided to play for the Reddies, what he is going to miss about high school football, and so much more in today’s recruit spotlight!

LaGrange senior WR/FS and Henderson State signee Devin Jack shows off his ability to make plays on the ball with this one handed grab. (Photo courtesy of American Press)

LAFM: What are your stats and accomplishments while at LaGrange?

I made 1st team All-District twice.

LAFM: You have signed with Henderson State to play at the next level. What has helped you make your decision to play for the Reddies?

I made the decision to go to Henderson State because I had a strong and consistent relationship with the coaching staff. I also felt that I should commit to the place that I felt closest at home.

My biggest strengths are my speed and ball hawking as a defender.

LAFM: What are some things that you need to improve on when you get to Henderson State?

I need to improve on getting stronger and working on my speed once I get to Henderson.

It was very fun. I seen those guys make a lot of plays in game winning situations. I wish them the best of luck at the next level.

LAFM: Who are some other teammates that you like to give a shout out to?

I would like to give a shout out to Kameron Davis, Chazmen Rigmaiden, Jordan W, and Colton Frank. Those guys are going to have to step it up for the upcoming season in 5A. Wish those guys the best of luck!

LAFM: The Gators had an up and down season going 5-6. What were your thoughts on the season as a whole?

Last season, our team was very young. We had first time players that we had to count on to help us make plays and help us make a good playoff run.

LAFM: What is your advice to next year’s LaGrange team?

My advice, to next year’s team, is to get in the weight room and work as hard as they can especially since they are making the transition from 4A to 5A. The talent is going to be way different.

When the season is over, I start working out and training with old teammates.

One thing that the readers don’t know about me is that I love taking care of my son Aden.

LAFM: What was the best game that you played while at LaGrange?

The best game, that I played at LaGrange, is against Rayne last season. I had two interceptions returning one for a touchdown and also had a receiving touchdown to make us the outright district champions.

LAFM: If you had to choose one more team to play against, what team would you play against and why?

I would love a rematch against Livonia, which we played them in my junior year. I believe we could beat them a second time around.

LAFM: What does it mean for you to play football at LaGrange?

It means a lot playing for LaGrange. It was the best experience that I had and the coaches treated me like a son especially Coach Wilson.

I will mostly miss playing with old teammates that I played with during my whole childhood.

LAFM: Why should Reddie fans be excited to have you on their football team?

Reddie fans should be excited about having me because I make game changing plays and make things happen when my name is called.