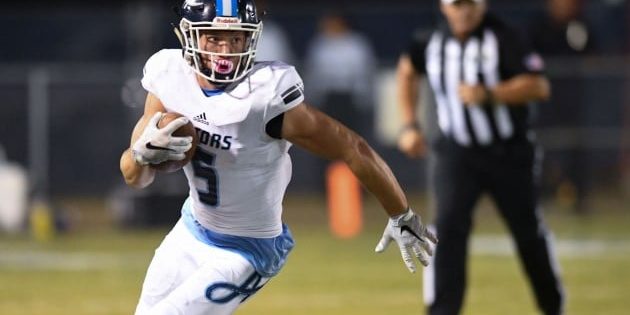 Entering this season, the Ascension Episcopal Blue Gators lost their star quarterback Jake Arceneaux due to graduation. Replacing a star quarterback is hard to do for anybody especially for a guy like Jake Vascocu, who played wide receiver for Arceneaux. Luckily for Vascocu, he had some pretty good receivers to throw the football to just to say the least. The WR duo of Ronald LeBlanc and Zack Ronquillo was one of the best in the entire state. Both receivers can beat you in many ways and really complemented one another while at Ascension Episcopal. Ronald LeBlanc was the big target at 6’6 and could beat you with his size, athleticism, and ability to make the big play. While LeBlanc can beat you long, Ronquillo can beat you short. If Vascocu needed to get rid of the ball quickly, he would dump it off to the athletic Zack Ronquillo. To make matters worse for defenses, they also had another talented slot receiver in senior Seth Kersetter. Ronquillo was a huge part of the Blue Gators’ championship run last season. Ronquillo is only 6’0, 195, but do not let his size fool you. He is a big time playmaker who can turn a short five yard pass into a big gain. Defensive coordinators were scratching their heads on how to contain both receivers. Zack Ronquillo had the ability to take over games last season and did during their playoff run. In the 1st round of the Division IV playoffs, the versatile senior wide receiver scored three different ways. He ran a kickoff back for a touchdown, ran for a touchdown, and caught a touchdown in the Blue Gators’ 45-7 win over district rival Highland Baptist. That sparked a playoff run for the Blue Gators that led them all the way to the Superdome. Even though the Blue Gators would lose in the state championship to Southern Lab, it was indeed a special season for the team. As of right now, Ronquillo has not received any offers and most likely has played his final football days at Ascension Episcopal, but there is no question how big of a mark that he has left on the football program leading a team that not only met their expectations but exceeded them. We caught up with Zack Ronquillo as he talked about his Blue Gator career, playing for both quarterbacks, his relationship with Ronald LeBlanc, his thoughts on playing football in college, and so much more in today’s recruit spotlight!

My name is  Zack Ronquillo. I am 18 years old, and I played for Ascension Episcopal School.

LAFM: What is your max bench press, max squat, 40 time, and vertical?

LAFM: What are your stats and accomplishments while at Ascension Episcopal?

I’m not all into my stats, but I’m more into team results. The only accomplishment, on my resume, is making it to the state championship and going undefeated in the regular season.

I would say my strength is running the shorter routes because I can get open, make a move, and get up field.

LAFM: What were your weaknesses as a wide receiver?

My weaknesses would be running vertical routes and my ability to make a play on that ball.

LAFM: Is there a school that you have signed to play football or have you ended your football career?

I have not signed with any school yet and most likely to end my football career.

LAFM: What do you want to say to the college coaches that are currently looking for another player on their roster?

If they are interested in me, I would love to hear what they have to say, but as of now, I’m thinking that I am hanging football up.

LAFM: You played with one of the best quarterbacks in the state two seasons ago in Jake Arceneaux. What was it like playing with a quarterback like him and how was the transition for you and guys like Ronald LeBlanc to move onto another quarterback?

Playing with Jake Arceneaux, two years ago, was definitely much more different than this past season with Jake V. Arceneaux brought to the table a little more arm strength which was critical when throwing the ball under pressure and for the deep ball. It was really special to play with a guy like Jake Arceneaux and made it a lot better to have Ronald along side of me in the other receiver position. The transition between the two quarterbacks was particularly tough for me to adjust to and alter to get open for Jake V, but it especially helps the transition when I have an All-State receiver on the other side and a slot receiver like Seth Kersetter as well as making the transition easier for Jake V.

LAFM: In speaking of Ronald, what was it like having another dynamic receiver on the same field as you?

Having Ronald Leblanc on the same field as me might not have gotten more balls thrown to me or more yards per game, but it definitely helped to get myself open because teams could not favor to guard him with a double team or I would get open and vice versa. It was surely special to play with a receiver like Ronald as well as our slot receiver Seth.

I am currently undecided on my major in college.

The biggest strength to Ascension Episcopal senior WR Zack Ronquillo is his ability to make plays after the catch. (Property of Benjamin Massey)

LAFM: The Blue Gators had themselves a great season going all the way to the state championship for the first time in school history. What was it like to lead the team all the way to the Superdome and did you ever before the season started that the team would get there?

At the start of the season, I was almost certain that it wasn’t gonna be like the previous year and was even questioning myself if we would even make the playoffs. The season started to roll around and before we know it, we were undefeated in the regular season thinking no one can stop us. The Superdome was hands down the greatest experience of my life and being able to lead our football team to their first ever state championship appearance.

LAFM: What was your best game while at Ascension Episcopal?

In my opinion, my best game at Ascension Episcopal was my junior year against Vermillion Catholic. I just got back from a torn quad and Jake Arceneaux as well as Coach Mike put the ball in my hands down the stretch, and I ended up scoring the game winning touchdown.

When football is over, I like to play other sports like track, basketball, golf, and also enjoy working out on my free time.

LAFM: What will you miss most about Louisiana high school football?

Everyone will tell you how different high school football is and the competition is just different from any other level. You get to play the greatest game with the friends you grew up with and be apart of something that matters to people. I think that is what I will miss the most.

LAFM: What are your thoughts on playing for a rising program like Ascension Episcopal?

It was truly special because when I was in 8th grade, the varsity team was 1-9 and to be able to turn that around to 10-0 in a couple of years is something that will forever be remembered at Ascension.

I can truly thank my parents for pushing me to be who I am today and to get up as well as push myself to be a better athlete and person everyday. Also, I can’t forget Coach Mike Desormeaux and Matt Desormeaux for teaching us athletes at Ascension a new understanding of work ethic and confidence to achieve what we want to achieve.

The linemen do not get enough credit for what they do on the field and not often do they get a shout out, but they are hands down the most important position on the field, and they worked hard to allow our offense to be as dominant as we were.

LAFM: What made you standout from all the other receivers in the state last season?