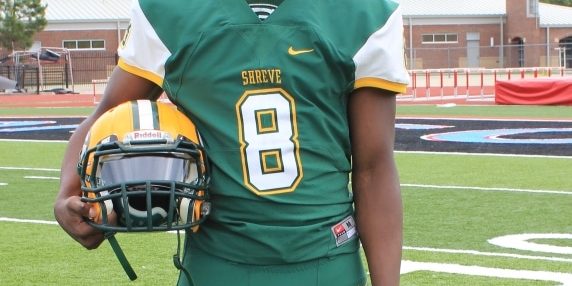 One of the most underrated athletes, in the Shreveport area, is Captain Shreve senior WR Camron Davis. Davis was named All-District as not only a football player, but as a basketball player as well. That is really hard to do especially in a tough and competitive 5A district.  The only other player to do that in District 1-5A this year was super talented Parkway junior WR Terrace Marshall Jr., who will be one of the most highly recruited receivers in the country coming back next season. Davis is no slouch as a great athlete either. At 6’1, 200 lbs.; Davis is a big and physical wide receiver that also has the ability to stretch defenses and come up with big receptions deep down the football field. Before the season, Davis and his Gator teammate Ashton LaCaze Jr. were expected to be the top returning players coming into the season on both sides of the football for the Gators, and they did not fail to meet those expectations. While LaCaze took care on the defensive side of the football, Davis was the offensive catalyst for the Gators. Both made 1st Team All-District as LaCaze had over 100 tackles while Davis was one of the top receivers in the area statistically with over 50 catches and 700 yards this past season. Davis is a versatile receiver as he can use his size to out jump defensive backs and be a vertical threat, but at the same time, he is a smooth runner after the catch and is also a red-zone threat. Louisiana Football Magazine Editor/T.V. Host/Scout Lee Brecheen had some high expectations for the talented Captain Shreve senior wide receiver before the season started.

“Camron Davis has great size as well as great upside for the position,” Brecheen said. “He not only brings size to the position, but he also has the ability to make big plays.”

Lee Brecheen also mentioned that he would be one of the top players in the district, and his prediction came true. Our very own Alex Martin caught up with Camron Davis as he talked about his high school career at Captain Shreve, the strengths to his game, areas that he has to improve on, and so much more in today’s recruit spotlight!

Captain Shreve senior WR Camron Davis uses his size and physicality on this defensive back with a stiff arm. (Photo courtesy of the Shreveport Times and provided by Camron Davis)

LAFM: What is your height and weight

LAFM: What are your stats and accomplishments while at Captain Shreve?

I had 1,650 receiving yards and 18 touchdowns over my career. I also made 1st team All-City.

My size and strength are my strengths as a wide receiver.

I still need to improve on my speed even though it is one of my strengths.

LAFM: What is your favorite route to run?

A comeback route is my favorite to run.

LAFM: Do you play any other sports?

LAFM: What is your message for next year’s Captain Shreve team?

My message for next year’s team would be to play hard no matter the situation is and go dumb.

Yes, I go to the end of the huddle. I pray off to myself, look up, and thank God for allowing me to play another game.

LAFM: What is your favorite game that you have played while at Captain Shreve?

My favorite game would have to be the Byrd game this year because we beat them for the first time in my career.

Yes, my brother played football for Shreve too. I wore the number one for him this past year.

LAFM: Is there anybody that you would like to give a shout out to?

Yes, I want to give a shout out to my friends Coop, Nico, Colygn, and Jimbo for keeping my head up and my boy coach Sella and my parents and last but not least God for blessing me with my ability.