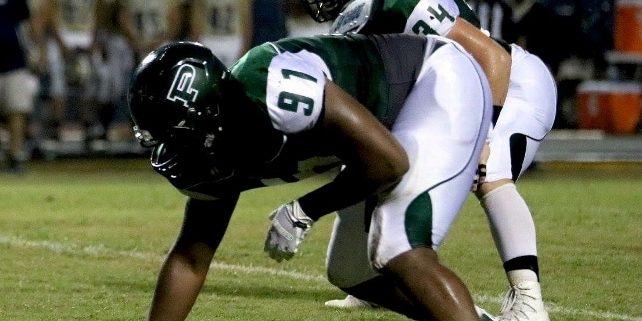 The Ponchatoula Green Wave had themselves another good season under Head Coach Hank Tierney. The Green Wave went 10-3 this season and made the second round of the playoffs until they lost to another 5A powerhouse team in Acadiana. Thanks to a great rushing offense as well as a great defense, the team was able to have another typical winning season making Ponchatoula one of the most consistent winning programs over the last five seasons. The Green Wave defense was particularly strong this season as the team gave up less than 20 points per game. One of the catalysts for making that feat, for this year’s team, was senior DE Tyrique Gibson. Gibson was the heart and soul of the defense. He played with a lot of energy and passion. That clearly showed on the football field and statistically. Last season, Gibson had the best year of his high school career racking up over 50 tackles, double digit sacks, and a couple of forced fumbles. Gibson was recognized as one of the best defensive players in the state as he made LSWA 5A 1st Team as a defensive end. He also was one of our nominees for Defensive Players of the Year in 5A as well. Louisiana Football Magazine Editor/Scout/T.V. Host Lee Brecheen believes that Tyrique Gibson has a very high ceiling as far as playing early at the next level.

Tyrique Gibson has SEC type ability,” Brecheen said. “Gibson moves well and will only get bigger and stronger . He could play right away as a true freshman.”

Tyrique Gibson will get the chance to play right away at McNeese State. Before the season started, Gibson committed to play for the Ragin’ Cajuns of the University of Louisiana-Lafayette, but in the end, he decided to take his talents to another in state school. Cowboys fans will be very happy to get a talent like Tyrique Gibson on their team next fall. We caught up with the McNeese State signee as he talked about his high school career, choosing the Cowboys over the Ragin’ Cajuns, the player he models his game after, and so much more in today’s recruit spotlight!

My name is Tyrique Gibson. I’m 17 years old, and I played for Ponchatoula High School.

I finished with 52 solo tackles, 10 sacks, 13 tackles for loss. I made 1st Team All-District, 1st Team All-Metro, and MVP on defense.

LAFM: You have signed with McNeese State after being committed to ULL for a long period of time. What helped you change your mind to pick the Cowboys over the Ragin’ Cajuns in the end?

Well, I fell in love with ULL and was ready to play for the Ragin’ Cajuns, but I made a decision that was best for myself and my family. That decision was to play for McNeese State University. #Cowboyup!!!

LAFM: What other sports did you play while at Ponchatoula?

I only played football at Ponchatoula.

LAFM: What was your pregame routine while playing for the school?

Before every game, I had to listen to music to keep my mind focused on the game and once I’m locked in, nobody can stand in my way!

My biggest strengths are my ability to pass rush, using my speed, and agilities to beat my opponent.

LAFM: What are some things that you need to improve on when you get to McNeese State?

When I get to McNeese State this summer, I need to focus on shooting my hands and rolling my hips better.

I model my play after Reggie Walker, who was a player that formerly played for Ponchatoula and is now one of the best defensive ends in the country at Kansas State.

LAFM: The Green Wave had high expectations this season. The team won 10 games and made a pretty good playoff run. What were your thoughts on the season as a whole?

I gave every game my all. Our season didn’t go how we expected, but I love everyone of my brothers that I played with on and off the field. I think it is going to make the young guys even better and make them strive for greatness.

When football season is over, I like to get ready for the next season and try to get better as well as let my body rest.

LAFM: Who was the best offensive lineman that you went up against and why?

I didn’t really have a big challenge this year because everyone was changing their offense up not trying to run the ball to my side.

First, All Glory goes to God. Other people that I would like to thank are my parents Neotha and Nicholas Gibson. I also want to thank Coach Hank, Coach King, and Coach Willie. Without them, I wouldn’t be the person nor the player that I am today.

LAFM: As a defensive lineman, do have a go to move when it comes to rushing the quarterback?

When it comes to rushing the QB, it all depends on how the offensive tackle does his dropback, but I’m going to use my speed and power.

LAFM: Why should Cowboy fans be excited to have you on their football team?

Cowboy fans are in a treat because I think the single season sack record is 12 or 13. I’m aiming for not only the record, but to surpass that. They are going to remember me before I leave and way long after.