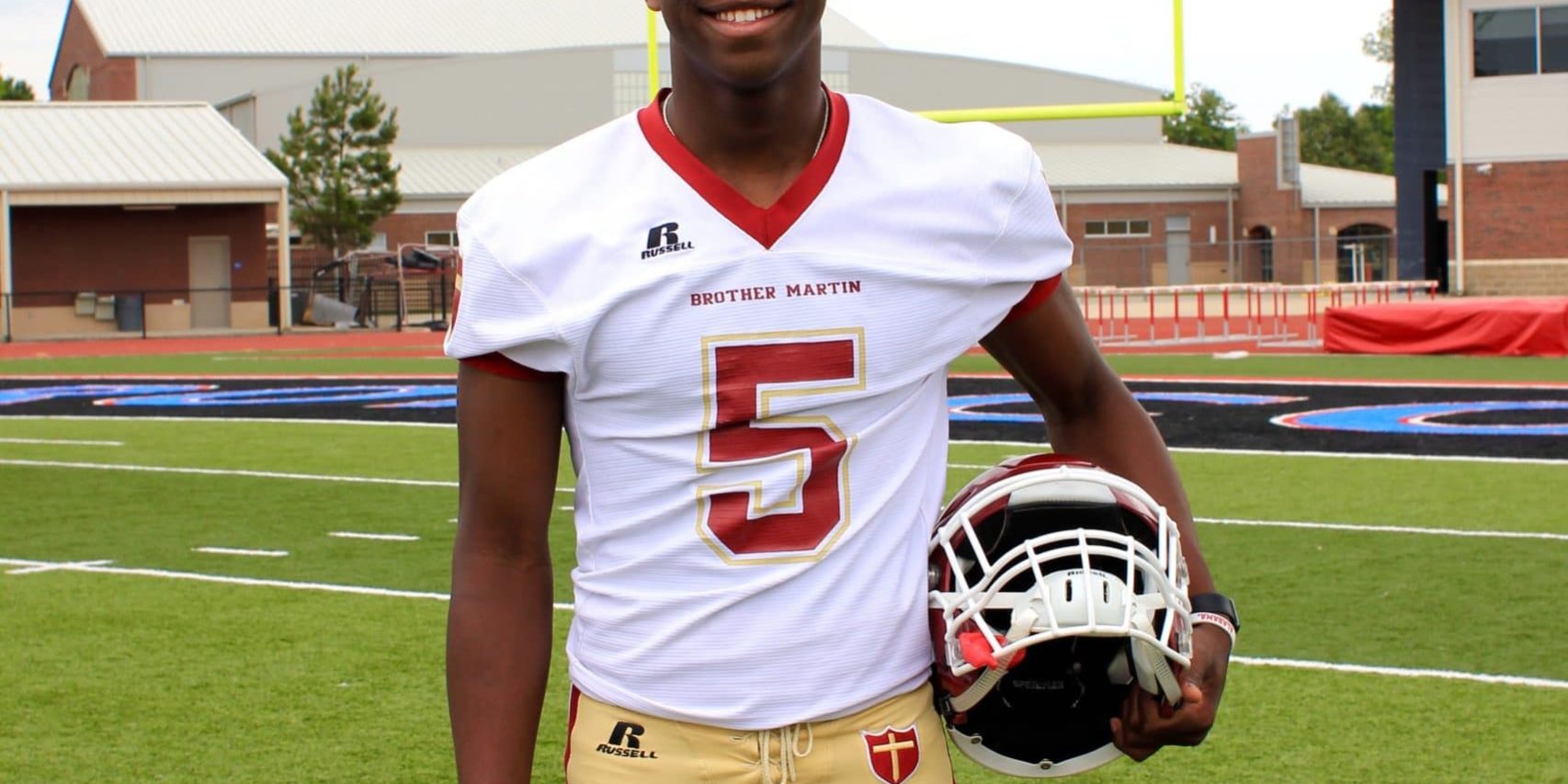 One of the most familiar football families for football fans ,especially in the New Orleans area, is the Swilling family. The family is consisted of Pat Swilling Sr.; who is a future NFL Hall of Famer that has spent seven seasons in the Big Easy playing for the New Orleans Saints and making five Pro Bowls. Pat Swilling Sr. is one of the greatest to play at his position in the NFL and his sons may just have that same potential. Of course, Pat Swilling’s son Brother Martin senior RB/LB Bruce Jordan-Swilling is one of the best players in the entire state and is taking his talents to Georgia Tech, but a lot of people forget to mention Pat Swilling’s other son and Bruce Jordan-Swilling’s brother Tre’ Swilling. Swilling was the number one cover cornerback for the Crusaders and always went up against some of the best receivers in the entire state. Not only did Tre’ Swilling play well against the big time competition, but he thrived. He was named All-Metro and All-District multiple times over his career as well as making 2nd Team All-State as a junior. He even made our 2nd All-Louisiana team at the beginning of the season. Over his career, he has made several interceptions and only 80 tackles, which is a good thing because it comes to show that opposing quarterbacks did not want to throw towards Tre’ Swilling’s way. Louisiana Football Magazine Editor/T.V. Host/Scout Lee Brecheen knows that Tre’ Swilling had the talent and the pedigree to be a great player in the future.

“Tre’ Swilling is gifted but his brother Bruce Jordan-Swilling is more advanced,” Brecheen said. “Swilling is going to be great in college and can run a 4.4/40. He has got to improve in run support and tackling like a lot of corners in the state.”

The good news is that Swilling is still young in his career and definitely has time to improve on his game, but there is no question that he can follow his family members’ footsteps. Both Bruce Jordan and Tre’ will carry on the family legacy for the Yellow Jackets of Georgia Tech. In today’s recruit spotlight, we caught up with the Georgia Tech signee as he talked about his high school career, what it is like to have a NFL legend as a father, playing with his brother, who he would take first in the NFL Draft, and so much more!

LAFM: What is your max bench press and max squat?

LAFM: What are your stats and accomplishments while at Brother Martin?

LAFM: You and your brother have signed with Georgia Tech to play football at the next level. Obviously, your Dad had a great collegiate career at Georgia Tech. Was it the success that your father has had at that school that helped make you and Bruce’s decision to play football for the Yellow Jackets?

It played a little part in my decision to attend there, but Georgia Tech just felt right for me, my brother, and my family. I had a great relationship with the coaches including Ted Roof, who recruited me and is also the defensive coordinator. My Dad would go back to the games as he would be recognized for the Georgia Tech Hall of Fame and the College Football Hall of Fame so I was very familiar with the school. I also had a great relationship with Coach Johnson. I also looked for a program that was prestigious in academics as well as athletics such as Brother Martin so I continue my education.

LAFM: Your Dad played a different position as you play cornerback and he played linebacker, but what is some advice that your father gave to you that helps you with your game today.

The advice, that my Dad gave to me, was more about life than football. He would always tell me to work hard and be a leader not a follower. He would also tell me to speak up, ask questions, and just to basically work hard for whatever I want to achieve.

LAFM: You and your brother Bruce are very competitive on the football field. Who would you say is the most competitive?

My competitive nature would say that I am the more competitive one, but I am sure if you asked my brother, he would say himself as well. It comes from our parents just telling us to always be competitive and to try our best.

The biggest strengths to my game really don’t have to deal with my athletic ability. My ability to recognize offenses and knowing which plays are coming as well as the routes that receivers are running are my strong suits. My length, size, and strength help me a lot as well as I can get there quickly enough to disrupt any timing between the quarterback and the wide receiver.

LAFM: What are some things that you need to improve on when you get to Georgia Tech?

Everything. I can’t wait to get to Georgia Tech to improve on everything. I want to get faster, bigger, and stronger in order to get there Day 1 and continue on my football career.

LAFM: Last year, Brother Martin had a really good year winning nine games and making it all the way to semifinals of the Division I playoffs. What were your overall thoughts on the season as a whole?

I think we did really good. We didn’t get a chance to go to the Superdome and have a chance to win the state championship, but we came together and had ourselves a really good season.

LAFM: The schedule was pretty tough for the Crusaders as the team played in the always tough Catholic league along with some very tough non-district teams such as Edna Karr as well as Catholic High (B.R.) and Scotlandville in the playoffs. Out of all the great teams you played last year, what team was the toughest to play against and why?

To say one team is tough to say because every week proved to be a different battle, but if I had to choose one team, it would be Edna Karr. You can see what they have done over the last couple of years. I believe they have been to six out of the last eight championships in the Superdome and Coach Brice Brown has done a great job over there. We knew it was going to be a battle because they were very athletic and hard to deal with.

LAFM: Looking back on the last two years, the Crusaders were very close in going to the state championship, but just falling short. How much do you reflect on those seasons knowing that the team was right there for a state championship?

It is very tough to remember, but it definitely has motivated me for the next level. All I want to do is win and it just proves that things are going to be hard in not only in football, but life in general. You just have to go and bounce back.

LAFM: What was your favorite football memory while at Brother Martin?

My favorite football memory would probably be when we played Catholic High (B.R.) again this season in the playoffs. It was one of my best personal performances. It seemed that we played them every year since I started playing varsity football. I just gave it all that I had. They were a very talented team and one of the top offenses in over the last couple of years. They do an awesome job at coaching and their players are very smart and athletic. That win over them was one of my favorite football memories.

LAFM: What do you like to do when you are not playing any sports?

Football plays a very important aspect in my life and I love it, but when I am not doing that, I love hanging out with my friends and family. I like to play video games as well as traveling to many places.

LAFM: You are a DI cornerback and everyday in practice, you went up against a DI wide receiver in Jeremy Singleton, who will be playing for the Houston Cougars. How much has it helped in your preparation for the next level competing against a receiver like Jeremy in practice?

Iron sharpens iron. I went up against one of the best, if not the best, wide receivers in the state. I believe Jeremy was being overlooked when he was in high school and was the best receiver that I went up against. I played against a lot of good receivers, but Jeremy is the best when it comes to getting the ball in the air as well as his route running. Just going up against him every day just made me better.

LAFM: With the NFL draft this week, if you had the 1st overall pick of the draft, who would you pick and why?

I would go with Leonard Fournette (former St. Augustine and LSU RB that was just drafted by the Jacksonville Jaguars). I think it is hard not to choose him. He brings so much to the table and is a team guy. He also works hard and was able to continue his success in college like he did in high school. I like everybody else in the draft, but I got to go with the home boy.

LAFM: Who is the college or NFL defensive back that you model your game after?

LAFM: Who are some people that you like to thank for helping you be in the position that you are in today?

I want to thank my dad Pat Swilling Sr.; my brother Pat Swilling Jr.; my mother, my sister, my closest friends, Taman Anderson, and I am really pulling for Leonard Fournette. I have seen what he has done and I have worked out with him. Malachi Dupre (former John Curtis and LSU wide receiver) is somebody else that I have known as well. My brother played with them and we would go to the park. Those guys have really inspired me.

LAFM: Why should Georgia Tech fans be excited to have you on their football team?

Georgia Tech fans should be excited that I will be on their football team because I am going to bring passion, fire, and my competitive drive to the team. I turn the locker room up a little bit and try to get everybody going because I am a great leader. I like to bring a little flavor to my game. I am also a winner so that is what I expect and what we expect that we are going to do.