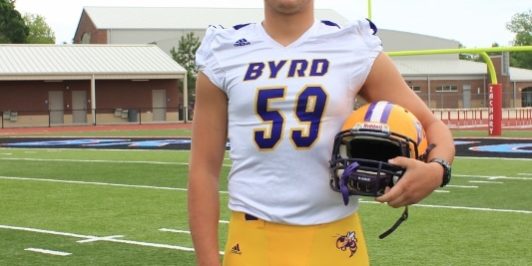 The C.E. Byrd Yellow Jackets led by Head Coach Mike Suggs have been one of the most consistent football programs in 5A over the last couple of seasons. The Yellow Jackets are usually in the conversation of state championship contenders and even made a state championship appearance in 2013. All of the recent success were reasons why this season was a big disappointment for the C.E. Byrd Yellow Jackets, but it was not for a lack of really good football players. This season, the team registered a 4-7 record and some of the team’s best players went down with injury for the first couple of games in the season. One of those players that went down was senior TE/OT Zack Ward. Ward is a big guy at 6’6, 250 pounds and has the athleticism to play tight end as well as the size to play offensive tackle. He is a really talented player whose strength is his ability to run block. The Yellow Jackets missed their big athletic lineman for the first couple of games and it showed. Zack Ward had to miss the first five games with an injury, and the team started the season at 0-5. However, there was a bright spot for Ward’s senior season. When he came back into action from his injury, Ward showed what kind of player that he is helping the team overcome the slow start to win four of the last six games of the season. At the beginning of the season, Ward impressed Louisiana Football Magazine Editor/Scout/T.V. Host Lee Brecheen as someone who can become a big time star in college.

“Zack Ward has a ton of ability,” Brecheen said. “Zack is a great blocker and is not even close to the size that he is going to be. He might grow into a big, athletic offensive tackle at the next level.”

There are a lot of qualities that Zack Ward has that will impress a lot of big time schools. First of all, he is big, athletic, a good run blocker, and has some pretty good hands to play tight end. All of his skills and talents were reasons why he was named to our 1st All-Louisiana team at the beginning of the season. Army West Point bases their offense on the triple option, and it is an offense that definitely fits Ward’s ability as a football player. Not only the Black Knights picked up Ward, but they also picked up two other great offensive linemen from this state in Plaquemine C/OG Abraham Delfin and Evangel Christian OG Ethan Harvey. They also picked up another tight end in Catholic High’s Chris Cameron. All these players, especially Ward, will be perfect fits for what the Knights are going to do on offense. We caught up with the Army West Point signee as he talked about his high school career, signing with Army, the player he models his game after, and so much more in today’s recruiting spotlight!

LAFM: What are your stats and accomplishments while at C.E. Byrd?

My strength is my run blocking because we ran the triple option at Byrd so I got pretty used to that.

I need to improve on my pass blocking as well as getting stronger.

I would have to say that I model my game after Zack Martin (former offensive guard for Notre Dame currently with the Dallas Cowboys). He is a big guy and I really appreciate his game.

LAFM: Let’s talk about the season. C.E. Byrd had a disappointing season compared to other seasons in the past going 4-7. What are your thoughts on your senior season as a whole?

It was definitely a rough one for all of us seniors because we had 13 starters out, and I was actually one of them. I missed the majority of the season because I only got to play the last five games. Luckily, we were able to win four of our last six games. It was really rough with all the seniors out, but we did the best that we could.

My favorite game happened when I was a junior, and we were playing Evangel Christian. They were supposed to be the big team, and we came in there to beat them 24-17. That was my best experience while at Byrd.

My advice would be to keep your eyes open and don’t settle on one place because that is where your family wants you to go or anything like that. Keep your mind open to everything and see what different places have to offer.

I have not figured out my major for college just yet.

LAFM: What does playing for a program like C.E. Byrd mean to you?

Playing for Byrd was incredible. I love that school. The coaching staff is just incredible, and it really means something to play for Byrd. It is not just another high school team for me.

LAFM: Your team had a really tough schedule this season. What team, in your opinion, was the best team that you have faced all season and why?

It definitely had to be Evangel Christian this past season. Almost every guy that they had was back playing from two seasons before. They are definitely well prepared and had the most talent.

LAFM: You were named to our All-Louisiana team at the beginning of the season. What does it mean for you to be recognized as one of the best players at your position in the entire state?

I am just really grateful for it. I always try to work hard every day and put my name out there by working hard. It is also something that the younger guys at Byrd can look up to. I really appreciate the honor.

LAFM: What are some other interesting facts that our readers don’t know about you?

I am just kind of an all-around guy. I play for some intramural teams, and I like to hunt and fish. I also have a lot of siblings as I have four brothers and one sister so I try and get to spend some time with them when the season is over.

LAFM: What is your message to next year’s Byrd team?

My message would be just to work hard, try harder than the guy next to you, and work together as a team.

There is nobody in my family that has played college or professional football, but my brother Caleb Ward played on the Byrd state championship team a couple of years ago.

I really have to thank my parents and my coaches. I would not be in this position that I am in today without my parents. My coaches have taught me everything in Coach Suggs and Coach Bruno.

LAFM: What makes you special or unique as a football player?

My morals and the fact that I try to stay humble are qualities that make me unique. I don’t like to boast too much and try to keep where my head needs to be as well as having a straight mind.