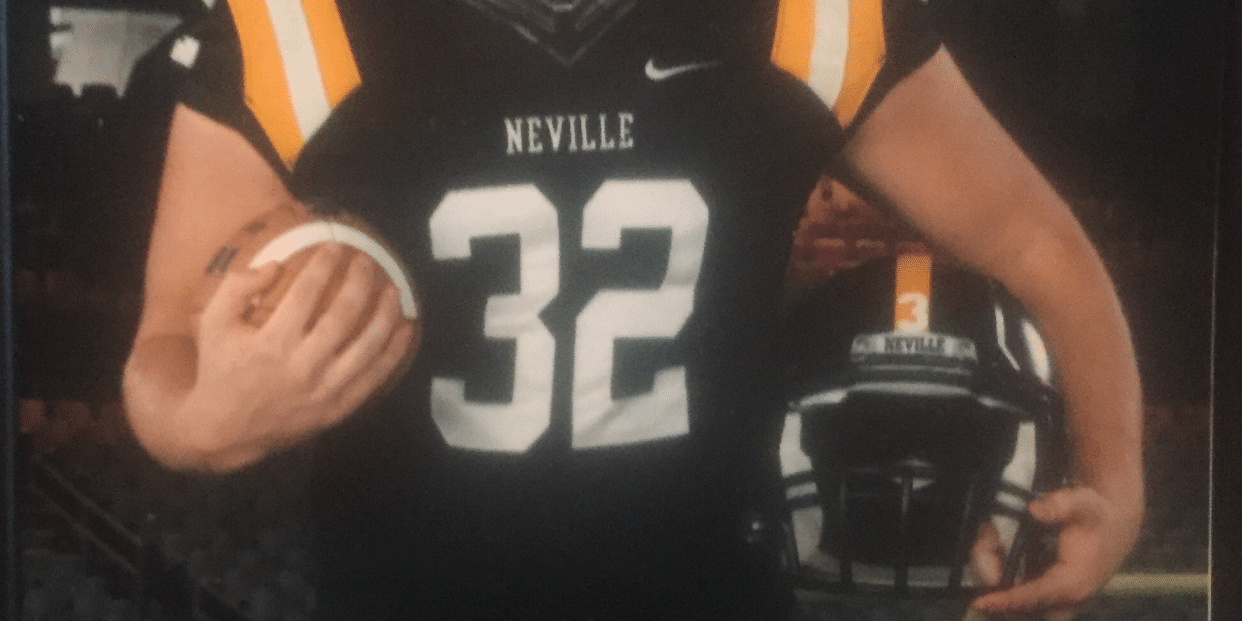 There are some guys that just excel in every role that they are given. Those types of guys may not make headlines, but they do whatever means is necessary for the good of the team. A perfect example of this comes in Neville’s do everything player in Chandler Moses. Moses may not be talked about as much as some of his other Neville teammates, but his role is just as important as everybody else. Moses does a great job of being unselfish and excelling at the little things that need to happen in order for his teammates to be successful. He has been a major reason on why the Tigers have been so dominant over the last three years. Whether it is playing tight end, fullback, or even long snapper, Moses does whatever it takes and whatever needs to be done. He is a great tight end and a fantastic blocker, but what might be his biggest strength is playing long snapper. Moses is arguably the best long snapper in the entire state and could definitely earn a scholarship because of his abilities as a long snapper. He is just another great long snapper that the Tigers are known for producing over the last decade or so. Louisiana Football Magazine’s recruiting expert Lee Brecheen has a lot of respect for Moses for what he can do as a football playe as he was named to our All-North Louisiana team before the season started.

When people think Swiss army knife players in football, they think of skill players, but in terms of the big, tough guys that can block, Chandler Moses is the true epitome of that term.  In today’s recruit spotlight, we caught up with Moses as he talks about how he got involved with long snapping, his favorite role on the football team, last year’s disappointing result in the Super Dome, what he is looking for in a school, and so much more!

LAFM: You are on our All-North Louisiana team. What does it mean for you heading into your senior season to be recognized as one of the best players in the state?

It’s an honor and at the same time, a reminder of all the long mornings up here working to get better and be at this point in my career.

One the offensive side of the football, I consider myself as a versatile blocker from the backfield or with my hand in the dirt. I have the ability to run routes out of the backfield or out of the slot and on the line on special teams. I think I am the most complete long snapper you can get. I have worked on my velocity, accuracy, and coverage down the field vigorously.

I need to work on my 40 time down and learn the real fine details of the game most people wouldn’t think about or work on.

LAFM: What are some things that you look at when choosing the school that you want to attend to?

I look at the family environment with a strong fan base that has a special tradition and culture to be apart of.

LAFM: What are some of your biggest accomplishments over your football career so far?

My biggest accomplishment in my career, at this time, would be going to the state championship every year I’ve been in high school and being apart of such a special event three years in a row.

LAFM: Last season, Neville had a chance to repeat as state champions and continue the impressive winning streak, but the team couldn’t pull off the feat against Edna Karr in the Superdome. What was the team’s attitude after the game and how has that very disappointing loss helped fuel the team for this season?

After the loss, it really humbled us and showed our team that everything isn’t handed to you. We have that bitter taste in our moth and we have been working harder than anybody in the state to get back to where we left off last season.

LAFM: So far, this season has started off rough at 1-2 especially when it comes to a program like Neville and the team’s expectations, but the team had to play three tough opponents out of the gate in Ruston, Ouachita Parish, and a really good team from Mississippi in Warren Central. What are your thoughts on how the team has performed in the first three games overall?

We have been searching for a rhythm offensively losing a lot of playmakers last year. We had some skill guys step up into some big roles that they are settling in now that we have a win under our belt. Defensively, I think we are solid. They work their tails off on the field and in the film room to keep the other team with a goose egg.

I feel confident in all three positions, but snapping and fullback are definitely my strongholds. I love the pressure from snapping in tight end scenarios, and I love the physicality playing fullback meeting a linebacker in a running lane.

I would say the state championship game in my sophomore year. I would just have to say that our offense was just on fire that game and it was a lot of fun to play in. Also, we came out with a ring.

I’d like to find a job working somewhere and do some hunting.

Getting back to 1500 Sugar Bowl Driver. Nothing less.

LAFM: What is your message to the Neville team and the fans for this season?

We have traditions and bonds like nobody else and y’all support means everything.

I would like to thank my family first and foremost. They have provided more than enough support for me. Secondly, Coach McCarty has played a huge part guiding me through my high school career on the field along with my academics.

LAFM: What intrigued you to try out for the long snapper role?

Well, since my freshman year, I’ve been working at snapping to make my way on the starting roster as an underclassmen and practiced for two years. They tried me out my junior year and got the spot finally. We’ve been strong at the long snapper sport these past years so I’ve been fortunate to learn from quality snappers.

LAFM: Why should colleges take an interest in you to be on their football team?

Like you said, I see myself as a Swiss army knife. Along with snapping, I can play FB/TE and with some coaching, I’m sure I could flip over and play some ball on defense as well.